Sadly, another season of hawk watching has come and gone. Judy Cinquina, leader of Mount Peter Hawkwatch, was kind enough to let me share the season ending report here on the blog. Judy does a really great job and it’s an interesting read for sure, with some numbers that will certainly concern many birders. Huge thanks to Judy for sharing.

2017 was the 60th anniversary of the Mount Peter Hawk Watch. Since 1958, every fall season has added more data to our knowledge of raptor numbers, migration and behavior. Leaders celebrated by breaking Red-shouldered Hawk and Peregrine Falcon daily records and toppling the old 1990 Peregrine fall count. The euphoria didn’t last long, even with four Golden Eagles and a Goshawk spicing up the final score of 8,996. Our 74-day count, from September 1 through November 15, failed to show any improvement in Harrier or Kestrel numbers, and the Red-tailed and Rough-legged Hawks seemed happy to either delay or reject migration altogether.

A slightly below average 6,874 Broad-winged Hawks were counted this season, most moving south between September 10 and 22. Leaders Rick Hansen and Ajit Antony garnered the only 1,000+ days. Rick recorded 1,140 on light SW winds, September 17, in spite of fog socking in the lookout for most of that morning. Ajit’s 1,764 Broad-wings on the 21st kettled up in light, northwest winds, but their migration stopped when clouds moved in for a couple of hours in the afternoon. Both leaders wondered if Broad-wings migrated unseen in the fog or clouds on their respective days. Usually a late October migrant, the majority of Red-shoulders turned up instead between November 4 and 11, producing our second best tally of 122: 69 adult, 11 immature, and 42 unknown. Matt Zeitler grabbed the best day, November 4, counting a record 27 on light north winds and destroying Ken Witkowski’s old record of 24 from October 27, 2013. Hopefully it’s a good sign that most of our three-digit counts of this species have occurred in the last six years. Once again Red-tails failed to move in large numbers before our watch ended on November 15. The 232 recorded was 93% below our 10-year average. Rough-legged Hawks were a no-show for the seventh consecutive fall.

Since 1978 when the watch was extended daily through October and into November, we were rewarded with four-digit tallies of Sharp-shinned Hawks, but not this fall. The 841 counted was 48% below our 10-year average. Our biggest day was 69 on October 20. Compare that to back to back records of 317 and 337 made in late September 1986. Meanwhile, numbers for their larger cousin, the Cooper’s Hawk, have been on the rise since 1990. They reached an above average 121, this fall. After a two-year absence, one Goshawk finally turned up, October 18. Ajit wrote that this large-headed accipiter sailed due south, never beating its wings.

The American Kestrel had a mini-rebound from last year’s abysmal 52, with 83 counted: 11 male, 23 female, 49 unknown. However, their numbers have been woefully low this entire decade. The 18 Merlin was rather average, but the larger Peregrine Falcon brightened our 60th with two records. On October 11, Ajit recorded 6, nudging out John Tramontano’s daily record of 5, counted October 17, 1992. Although we don’t get their falcon numbers, we mirrored Montclair’s and Hook Mountain’s record Peregrine numbers this season, counting 26 and surpassed the 21 counted in 1990.That is excellent news since DDT almost eliminated this species from our landscape by the 1960’s.

Osprey numbers bounced back a bit but still came in 38% below their 10-year average at 111. In the 2016 edition of the Northeast Hawk Watch Report, Drew Panko points out that while Osprey breeding has increased, “numbers counted in migration has been decreasing for the last 30 years…” The cause remains a mystery. Why the N. Harrier numbers are reaching rock bottom is not so mysterious, with their habitat of wetlands and fields disappearing at an alarming rate. The 26 logged this fall is pathetic and well below the record 101 logged in 1980. Bald Eagles are on an amazing rebound, especially in the last 10 years. The 85 noted this season (44 adults, 38 immature, and 3 unknown) was above average. Always uncommon in the northeast, the Golden Eagle came in at an average 4: 3 adult, 1 immature.

We did not begin counting Turkey Vultures until the 1980’s, and differentiating locals from migrants has always been a challenge. The 320 counted this fall was above average, and so were the 96 Black Vultures. 1985 produced the first Black Vulture ever seen over our lookout, and now they’re quite common. Local C. Ravens were with us almost daily with up to 5 counted. 681 Monarch Butterflies surpassed last year’s 131, the majority moving between October 3 and 11.Ruby-throated Hummingbirds barely made an appearance with a mere 15 recorded. Denise Farrell noted 3,515 Canada Geese, September 28, as part of our final 10,365 counted between September 28 and November 11. The high Brant count was 95 on November 4, with 146 tallied by season’s end, and only 10 Snow Geese showed up, with a single Snow hanging on to the end of a skein of Canadas, November 7. Between October 31 and November 10, 19 C. Loons were observed heading east towards Greenwood Lake. Other birds of interest included:

What better way to celebrate our 60th consecutive watch then with an official hat, designed and donated by Denise Farrell. Our hats on to Denise! A big thank you to all our friends and visitors who helped with the count, especially Bill Connolly, Rob Stone and Carol Linguanti. Sadly, Carol passed away at the end of October. Carol was the creator of our Facebook page and a dedicated leader. Her enthusiasm and spirit will be missed. A big thank you to our clean-up crew: Denise, Rick Hansen, Rochana Muenthongchin, Beverly Robertson, Gene Tappan, Will Test, and especially Tom Millard who installed our box on the platform. Our deep appreciation to Evan Masten and George Profus, NYDEC Region 3 Foresters who cut some of the larger trees blocking our views before the watch began, and to Mike Limatola and Kurt Muenz and the Fyke Nature Association for providing the insurance required for our Clean-Up day. We are also indebted to Fyke for their continued support, especially for sponsoring our Mount Peter site on Hawkcount.org. We continue as the oldest, continually run, all-volunteer fall watch in the country. 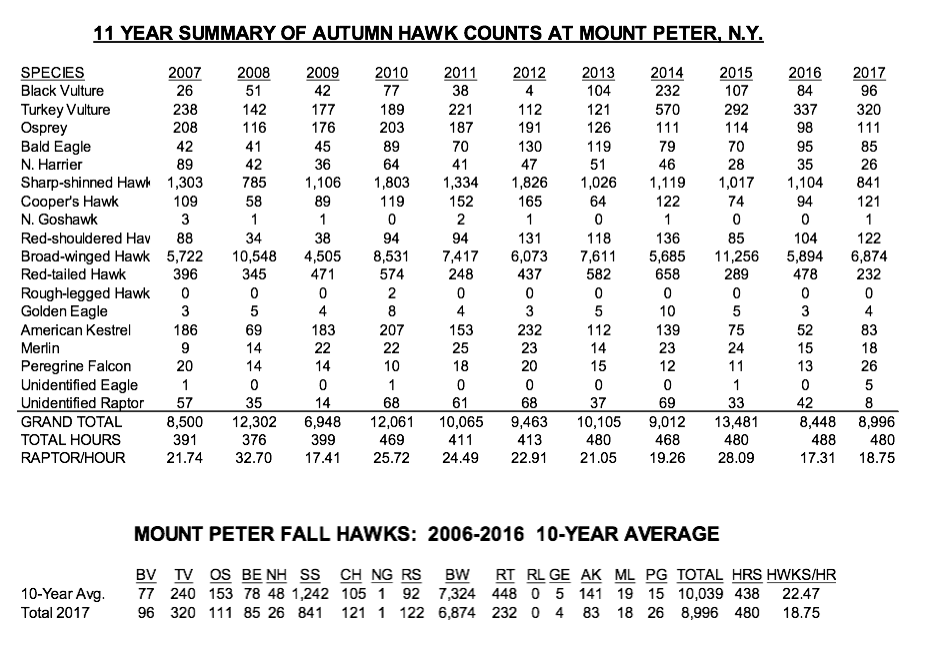