I spent five hours yesterday in a photo blind out at the Shawangunk Grasslands. I feel like when it comes to bird photography when it rains it pours – the light was really nice all day, there were plenty of birds to be seen, and best of all, the Short-eared Owls came up early.

Seeing the above Northern Shrike was the highlight of a great Saturday of birding. Huge thanks to John Haas and Bill and Jayne Fiero who found the bird during the Eastern Orange County Christmas Bird Count (see John’s blog post about it here). Also many thanks to Ken McDermott who was also out at Corbett Road and let me know exactly where he had seen the bird earlier in the day. And finally, congratulations to Jeff Goulding who was having a tough day. The Northern Shrike was a life bird for him and I’m sure it made his day just a little bit better.

I started the morning off with a quick stop at Orange-Rockland Lake. I have been stopping by there fairly regularly and finding good numbers of both Ruddy Ducks and Ring-necked Ducks. This morning was no different:

My next stop was at Brown’s Pond, where I found an incredible variety of waterfowl in huge numbers:

I was also surprised by getting a few good songbirds:

t was after Brown’s Pond that I went to Montgomery and saw the Northern Shrike. What a thrill, this is a bird that is very exciting to me. I became convinced that I was not going to see the bird when Ken had to leave, but about five minutes later I spotted the bird – exactly where Ken had seen it earlier in the day. I also had an adult Bald Eagle fly over in the distance while I was there. Here’s one more of the shrike:

My final stop was the Shawangunk Grasslands. You can drive your car into the grasslands now and park on the old airplane runway. It was pretty cold today, so I was happy to have this as an option. The highlight was getting my best look ever at a Rough-legged Hawk. It was tangling pretty good with some of the Northern Harriers: 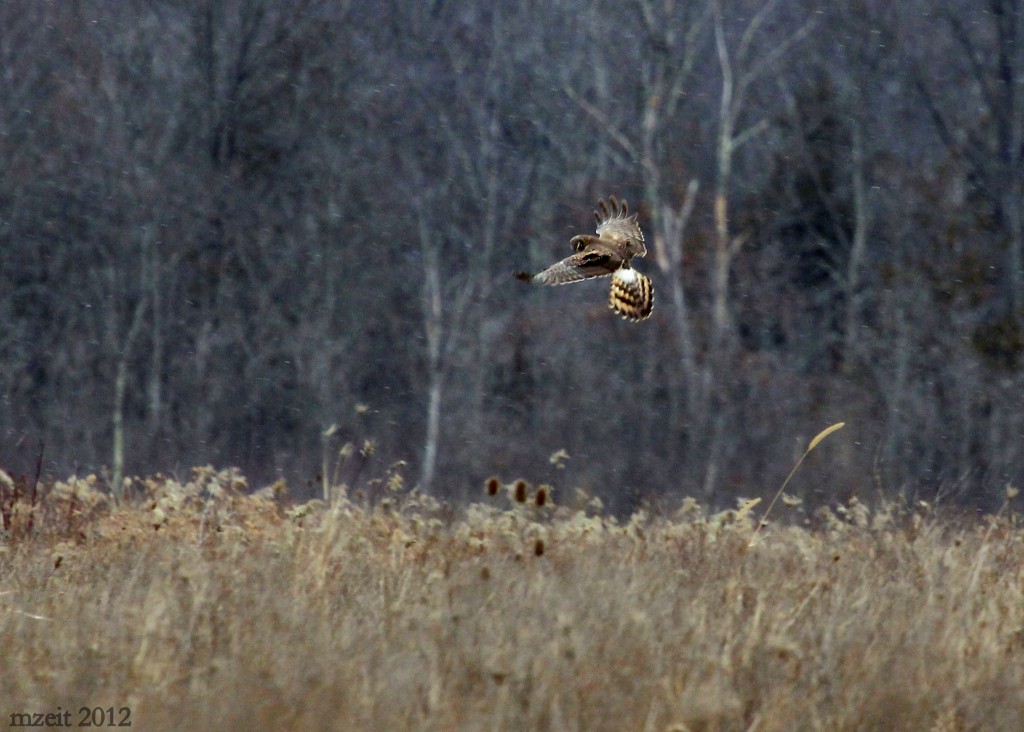 So it may not officially be winter yet, but it feels like it to me. My birding time has been cut back considerably and when I do get some time it is usually in the afternoons when the light is very gray and disappearing quickly. That being said, I am still getting out, and while the conditions have not been great for seeing and photographing birds, the birding has still been pretty good.

After work 0n December 3, I went out to Mission Land Road in Pine Island. Rob Stone had reported to the Mearns Bird Club  that he had 4 Sandhill Cranes there, so I wanted to see if I could get a look. I found the birds easily enough, pretty much right where he had found them. They were WAY off in the distance, which meant no photos, but I got good looks in my scope and then in my binoculars as I watched them fly off towards the Wallkill River NWR. What big beautiful birds, especially in flight. I also had a number of Canada Geese and a Male American Kestrel while I was out there.

Later that week I took the trip into the Bronx, to Van Cortlandt Park in search of a Barnacle Goose. The goose had been reported many times on eBird, and I also saw it in a post buy Corey Finger at 10,000 Birds (which is an amazing site that you must check out!). I’ll tell you what, the Barnacle Goose has my number. You can ask Tricia how much time I spent last fall trying to track one down here in Orange County with no luck. Well it was the same deal in the Bronx. In a soccer field at Van Cortlandt Park there were approximately 700 Canada Geese to sift through. I sifted until it got dark but alas no Barnacle Goose.  I checked on eBird afterwards, and no one else had the goose that day either, so I am figuring the bird just wasn’t present that day. There WAS a reported siting the very next day… I did find the above Cackling Goose, though I don’t know if I would have identified it if I hadn’t read in Corey’s blog post that he had one out there. Either way it was very cool to see this bird, which was a life bird for me. The light was horrible so the photos are nothing to write home about, but really not too bad I guess.

On the weekend of December 8-9, I did some Orange County birding both days. The weather was not cooperating; Saturday was rainy, foggy and gray, Sunday was just a cloudy gray day. On Saturday I hit Skinner’s Lane, Mission Land Road, and Wallkill River NWR. While I did not have any out of the ordinary birds, I was able to get some photos.

On Sunday I tried a new spot in Orange County (for me)- Brown’s Pond. Bruce Nott had reported a Lesser Scaup out at Brown’s Pond so I thought that might be an interesting stop. I did not find the Lesser Scaup, but I did have 27 Common Mergansers (my first ones since the spring), and 3 Hooded Mergansers which are always a favorite of mine. On my way home I stopped at my local spot: 6 1/2 Station Road Sanctuary and saw mostly the usual cast of characters, with the highlight for me being this Brown Creeper:

Finally, this week I did some birding in Bergen County, New Jersey. At Franklin Lake early in the week I had a couple of great days, finally getting there to see the pair of Redheads that where originally reported on eBird by Rob Fanning on the third of December. I felt like I was kind of dragging my feet, finally getting over there on December 10th. Luckily the birds where still there, along with 42(!) Ring-necked Ducks, 11 Mute Swans, 4 Gadwalls, and one lonely Canada Goose.

Then, on Friday, Karen Miller made it down to Bergen County. We met over at Franklin Lake in hopes of seeing the Redheads, but, believe it or not, the sun was TOO BRIGHT. There was a tremendous glare on the lake making seeing the birds very difficult, so we decided to head over to Franklin Lakes NR which is right down the road. We walked some of the trails there. Highlights included many Hooded Mergansers, 10 Gadwall, and we got some really nice looks at a very active Belted Kingfisher.