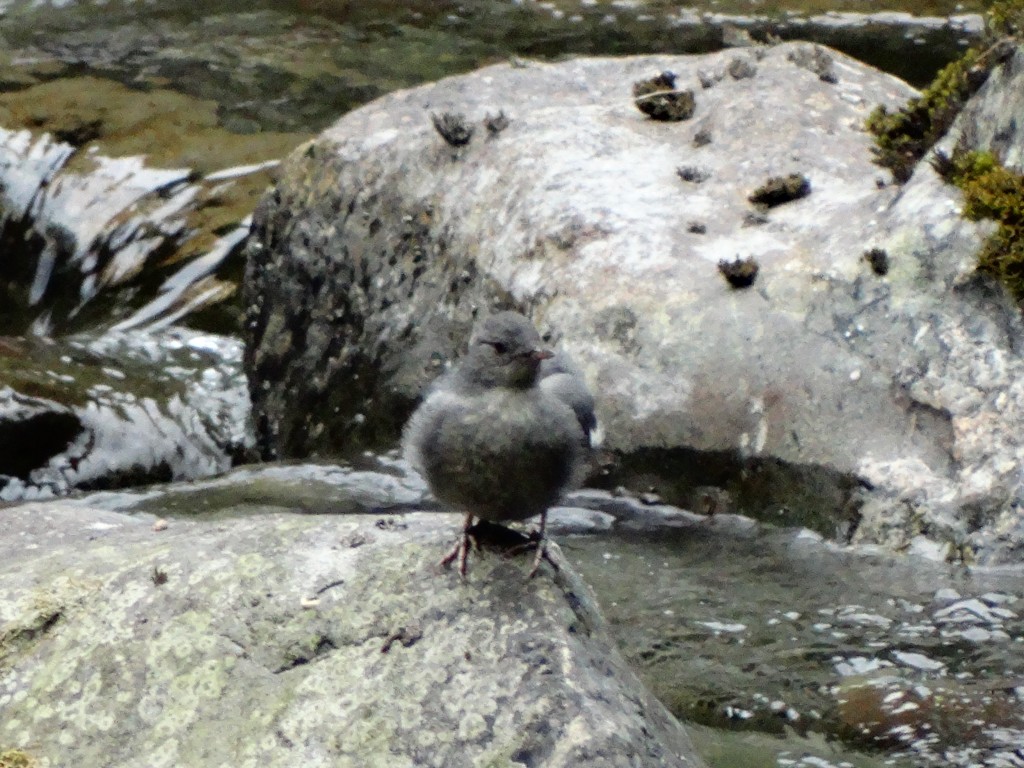 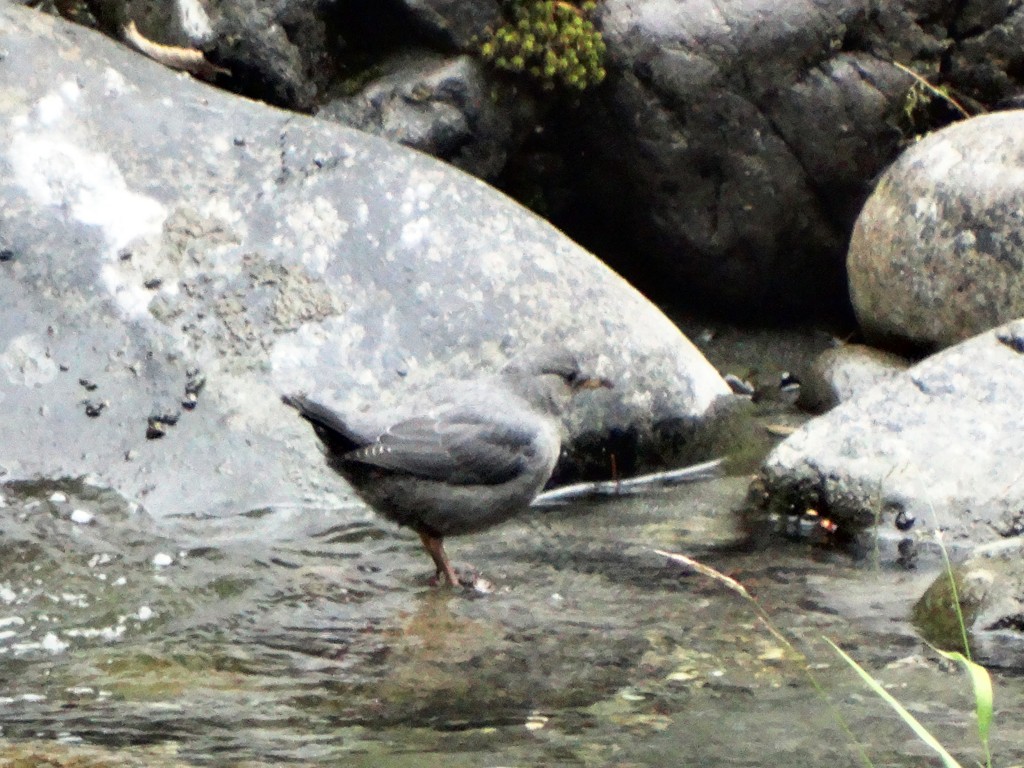 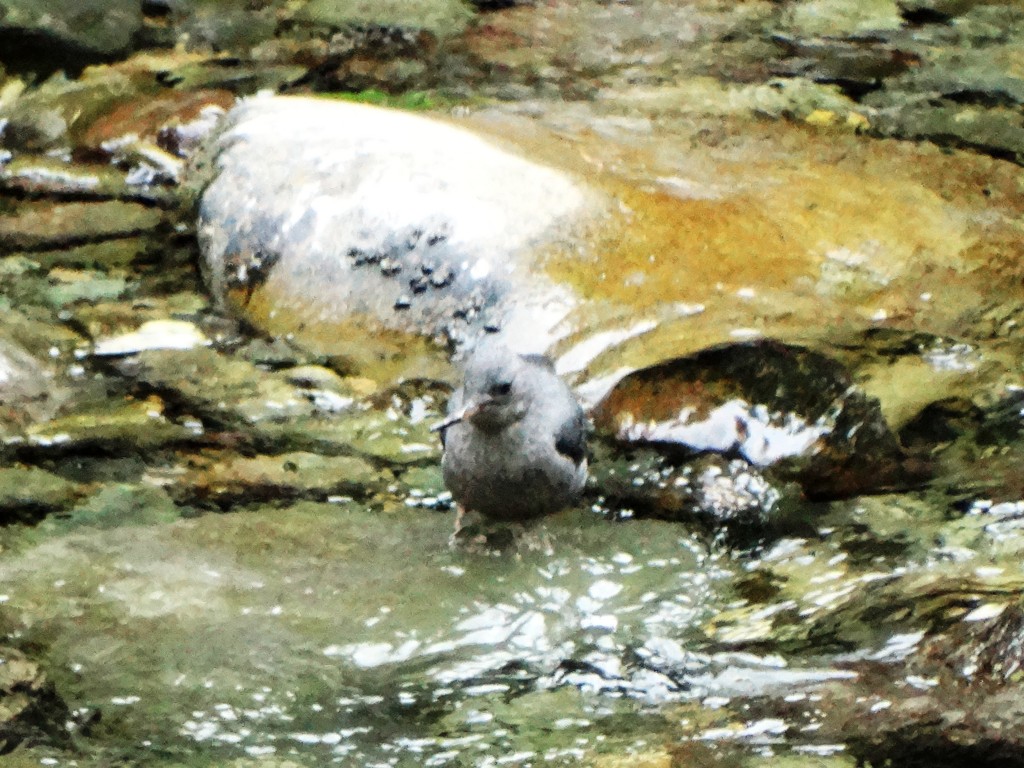 I was amazed that we drove way into the woods and our guide, Bob Sundstrum, knew right where to find an American Dipper in the stream below the road.  While this is not a colorful bird, it stands out in its ability to wade and swim underwater in mountain streams to feed. Such a cute little guy! 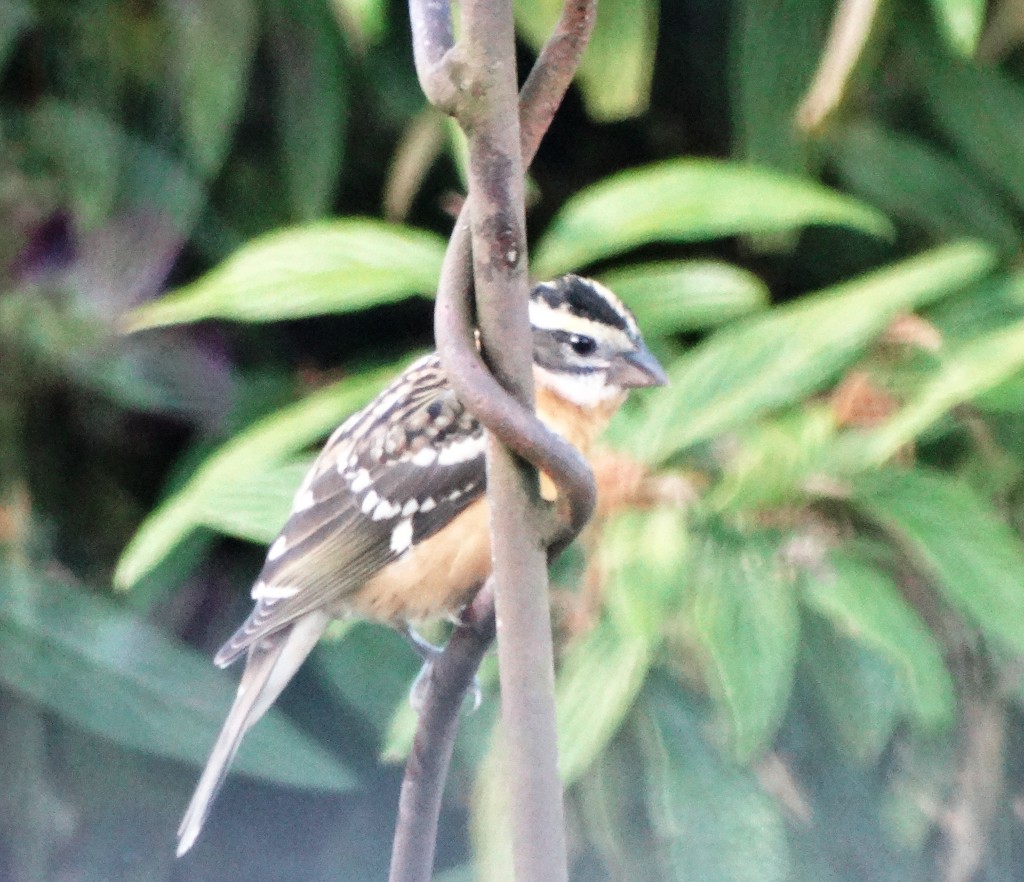 These birds are the female and male Black-headed Grosbeak.  The male was preening his feathers, so he looks a bit ruffled! 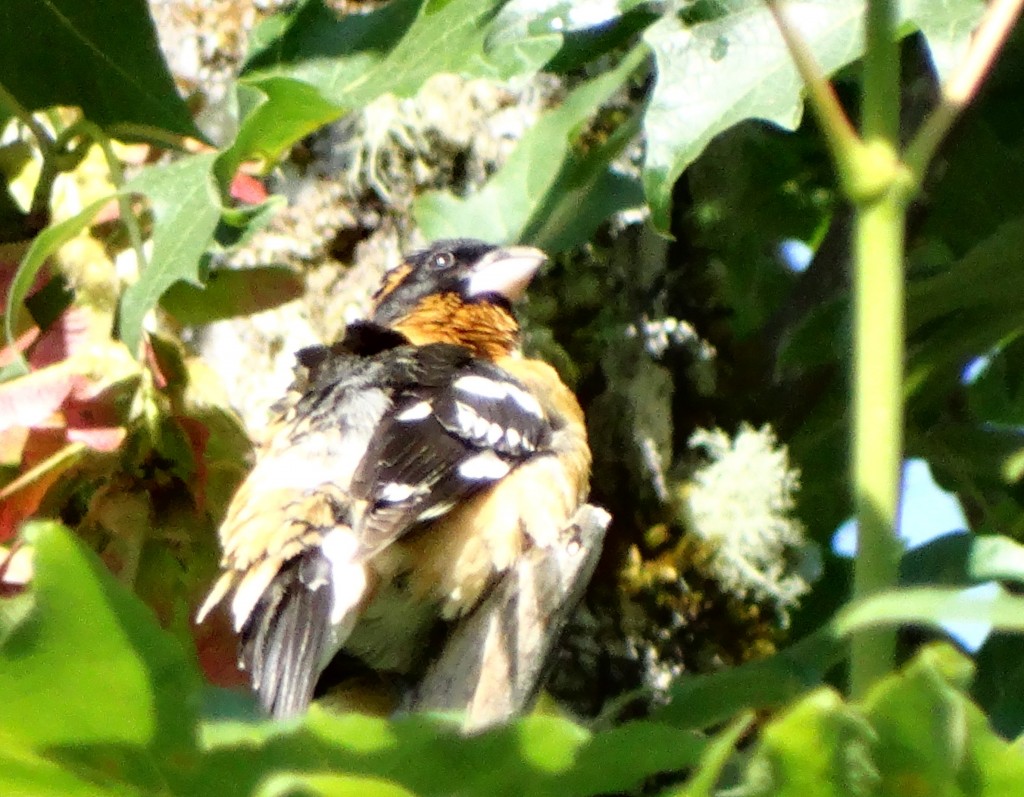 Hope you enjoy these pictures of my trip to the Pacific NW while Matt is away.  – Karen 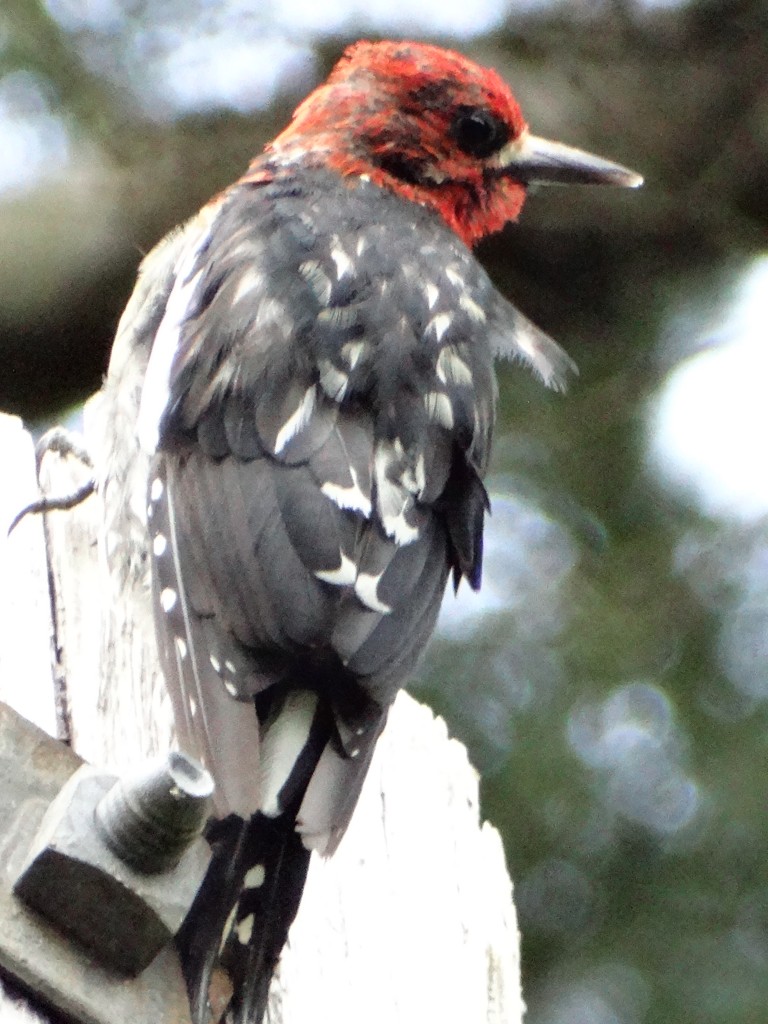 Matt and Tricia’s wedding trip to Maine also includes a trip to see the Atlantic Puffins.  So in honor of their wedding, I am sharing the Tufted Puffins that I saw in Washington State.  I hope this posts brings them luck in their quest to see Puffins and all the best for a happy marriage.

These birds seemed to appear on the water out of the morning fog.  I decided to keep the fog in some of the pictures just because it’s reminiscent of it rolling across the bay in a way that was almost eerie. The first Puffin caught a small fish for breakfast  These birds were definitely the highlight of the day! 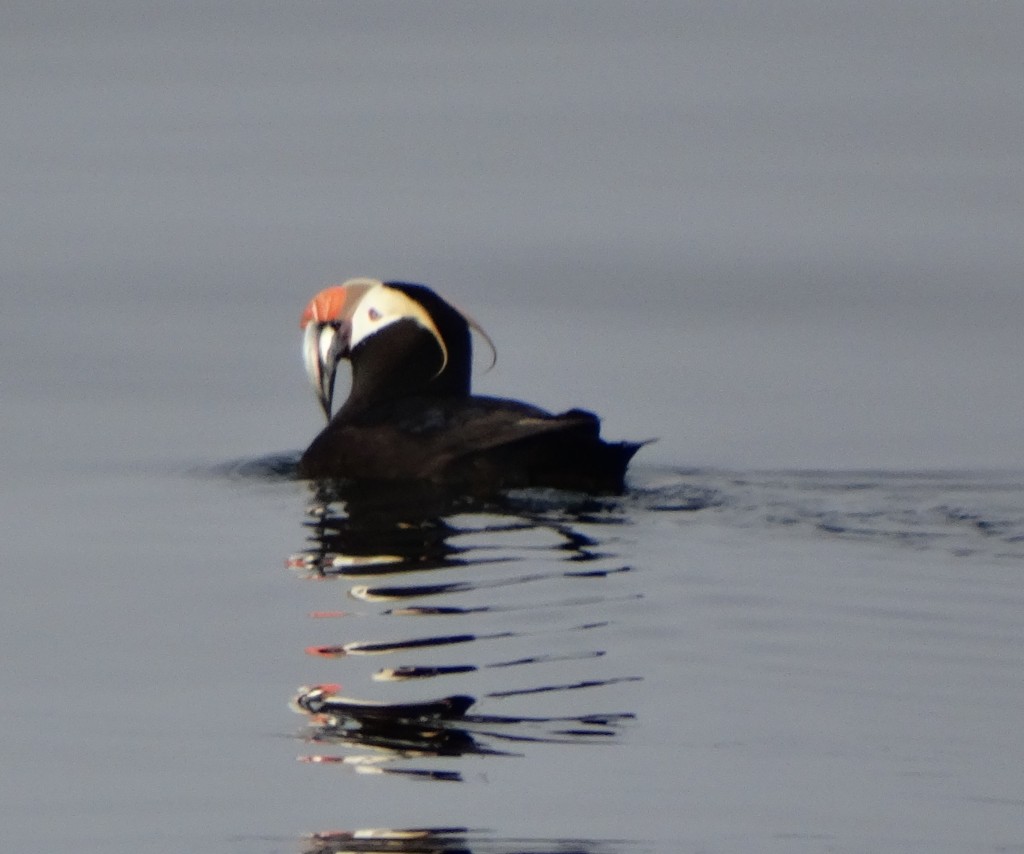 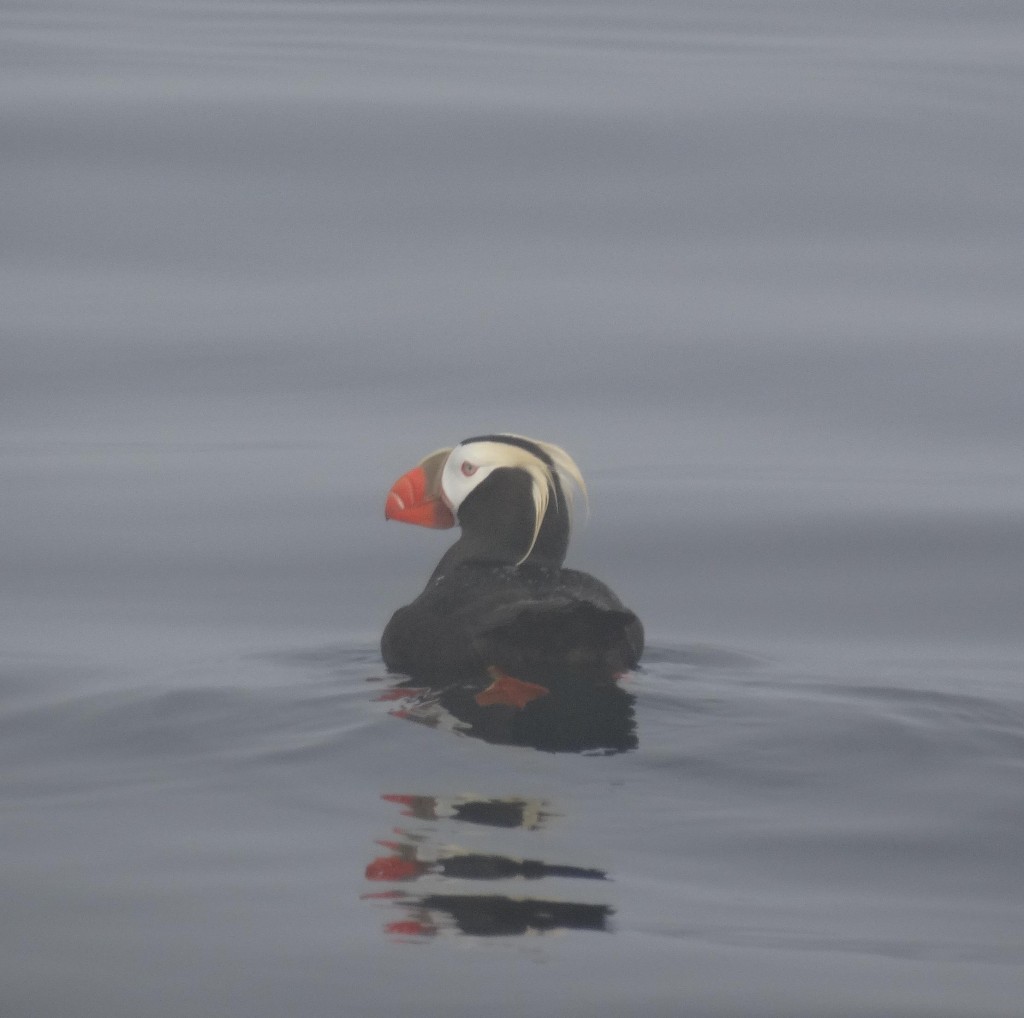 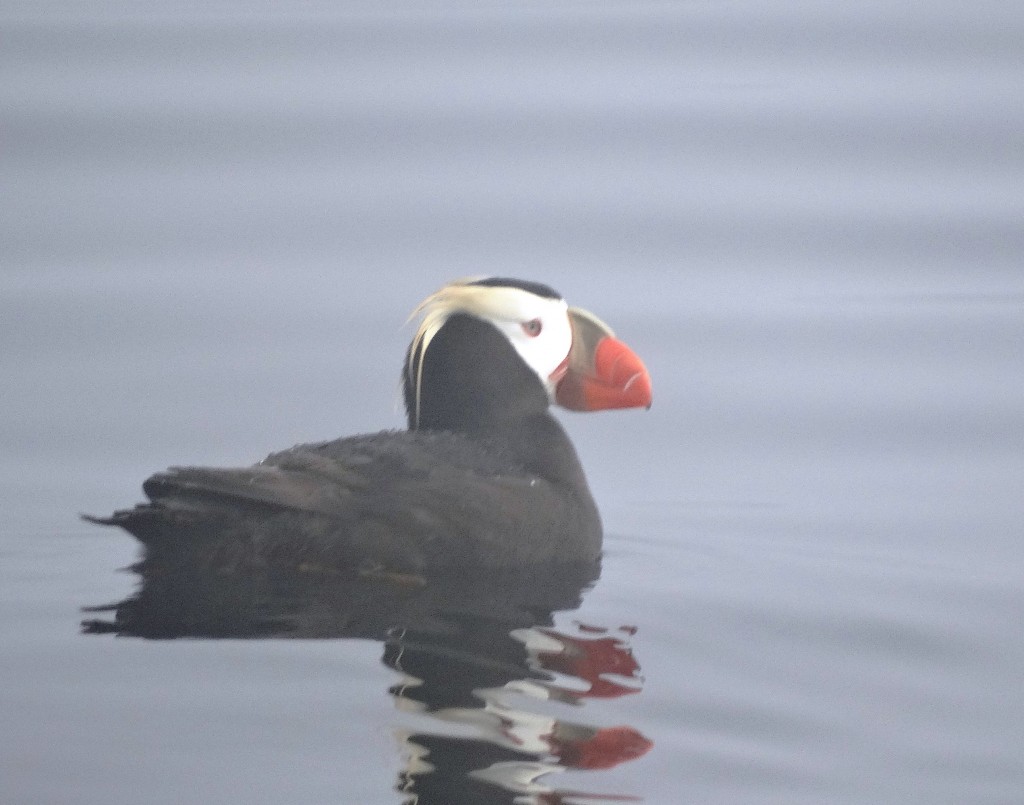 Tomorrow morning I am going on a two week vacation to Maine, where Tricia and I will get married! I’m not entirely sure if I will be posting while I’m gone, but it’s not likely. In the meantime, KAREN MILLER will be doing some guest posts. Right now she is on a birding trip in Seattle, so I look forward to seeing what birds she had while she was out there. Huge thanks to Karen – can’t wait to see your posts!

QUICK POST: I made a brief stop at the Liberty Loop after work – shorebird numbers were slightly down but still considerable. The big news was the addition of a Pectoral Sandpiper, my FOS. Here’s my list for the day, more guesstimates than counting as I did not have tons of time:

QUICK POST: Shorebirds are on the move now! Observed on the southern end (the back pool) of the Liberty Loop this afternoon:

I had two sets of birding plans for this morning that were foiled. I was initially going to go down to New Jersey to chase the European Golden-Plover that had been reported, but all the reports I read and received indicated that it was likely that this bird had moved on. My second plan was to get out to Sullivan County with Linda Scrima to try for the Stilt Sandpiper that Karen Miller found yesterday – you can read about it at the Bashakill Birder. That plan was cut short with a couple of phone calls this morning from John Haas, letting me know that the bird had not been relocated. With a change of plans, we decided meet up with Maria Loukeris and walk the Liberty Loop at Wallkill River National Wildlife Refuge. What a good decision that turned out to be; it was a very active morning with wading birds stealing the show. It started with Linda locating a BLACK-CROWNED NIGHT HERON from the viewing platform moments after our arrival. This was my FOS BCNH in Orange County so that was a bonus for me. In the distance we could see three Great Egrets in flight and as we began to walk the loop, it was apparent that Great Blue Herons were present in numbers. We eventually caught up with the egrets and they were quite accommodating, allowing for many photos. I am not thrilled with my results, but still it was great to see them.

The big news of the day, however, was a nice collection of shorebirds:

It was exciting to see that some shorebirds are moving through and it was a great morning of birding with a large variety of species being seen and heard – we had 47 birds on our list for the walk.

So, I have gotten out a number of times this week but have not had time to post. For the most part it was the expected cast of characters, but there were some exceptions. My best bird of the week was the PURPLE MARTIN, four of which were observed at Stewart State Forest on both 7/17 and 7/20. A close second place was a single HORNED LARK in the black dirt region on 7/16, and it was also really great to see some shorebird movement with  three LEAST SANDPIPERS and two LESSER YELLOWLEGS at the Camel Farm on 7/15 and three more LESA out in Sullivan County on 7/18. So, things are starting to happen, which is exciting. Here are my shots from the week:

Last night, Tricia and I were fortunate enough to be present for the release of not one, but three EASTERN SCREECH-OWLS. The owls were all injured in the Warwick area and rehabilitated by Missy Runyan at the Friends of the Feathered and Furry Wildlife Center. Our friend Carol Linguanti, who is also a wildlife rehabber, was given the wonderful task of releasing the birds and invited me along to witness and take some photos. This, of course made me nervous about getting good shots, but I was thrilled to have the opportunity. Our first stop was at Homestead Village, where one of the birds was found on the lawn of a resident. Since the bird was brought in for rehabilitation a short time ago, it was released in the same spot where it was picked up. Here are some shots from the release:

The second and third owls apparently had been in rehab for a longer period of time, during which, they bonded. They were to be released together on a large tract of land that Carol owns in Warwick. This release was made even more exciting with the sighting of TWO BEARS! How good can it get? Here are the photos from that release:

I really cannot thank Carol enough for inviting me to be part of this. It was so exciting to get to see these owls up close and fulfilling to know that they had been successfully rehabbed and now were back where they belonged.

Quick Post: Here’s a couple of shots I got yesterday after work during a brief stop at the Wallkill River National Wildlife Refuge – Liberty Marsh.