Okay, so it’s time to play a little catch up. I’ve been getting out a bit in the last week but haven’t been organized enough or had the time to do posts. I’ll start with tonight after work – I stopped by 6 1/2 Station Road Sanctuary right here in Goshen. I  am happy to say that all the ice has melted and the sanctuary was relatively birdy. It was nice to be on foot once again as well. Here’s my list for the night:

So, that was tonight. Now for the catch up over the last week. No great photos to speak of, but I guess that’s just the way it goes sometimes. 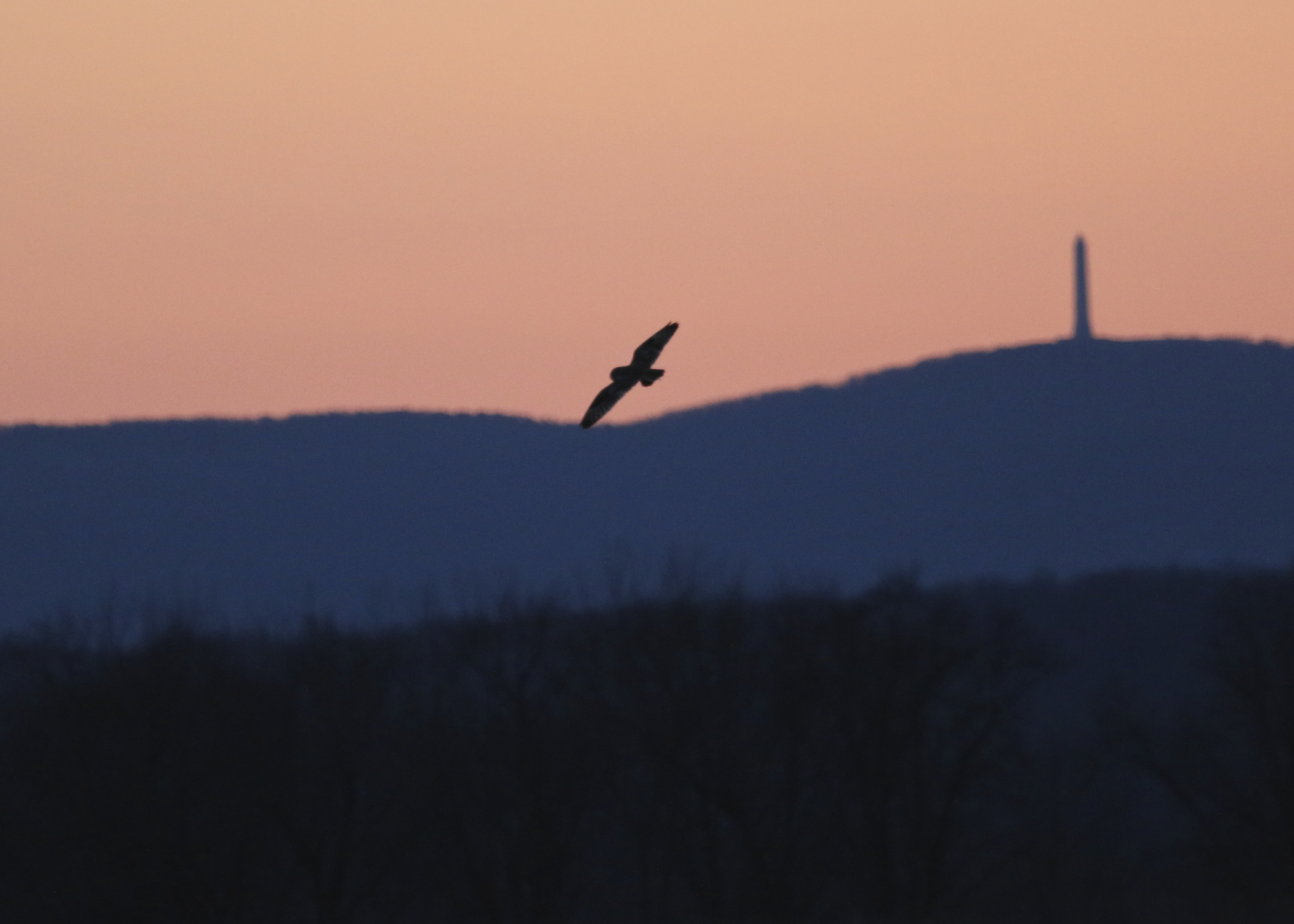 Monday I was out in the Black Dirt Region sorting through Canada Geese with no luck. I was happy to see that 4 Short-eared Owls were still around though.

Tuesday I was out looking for geese in Pine Island and came across a small flock of Snow Geese – approximately 400 birds. This group continues and was seen at the Camel Farm by a couple of people today (3/31/14). 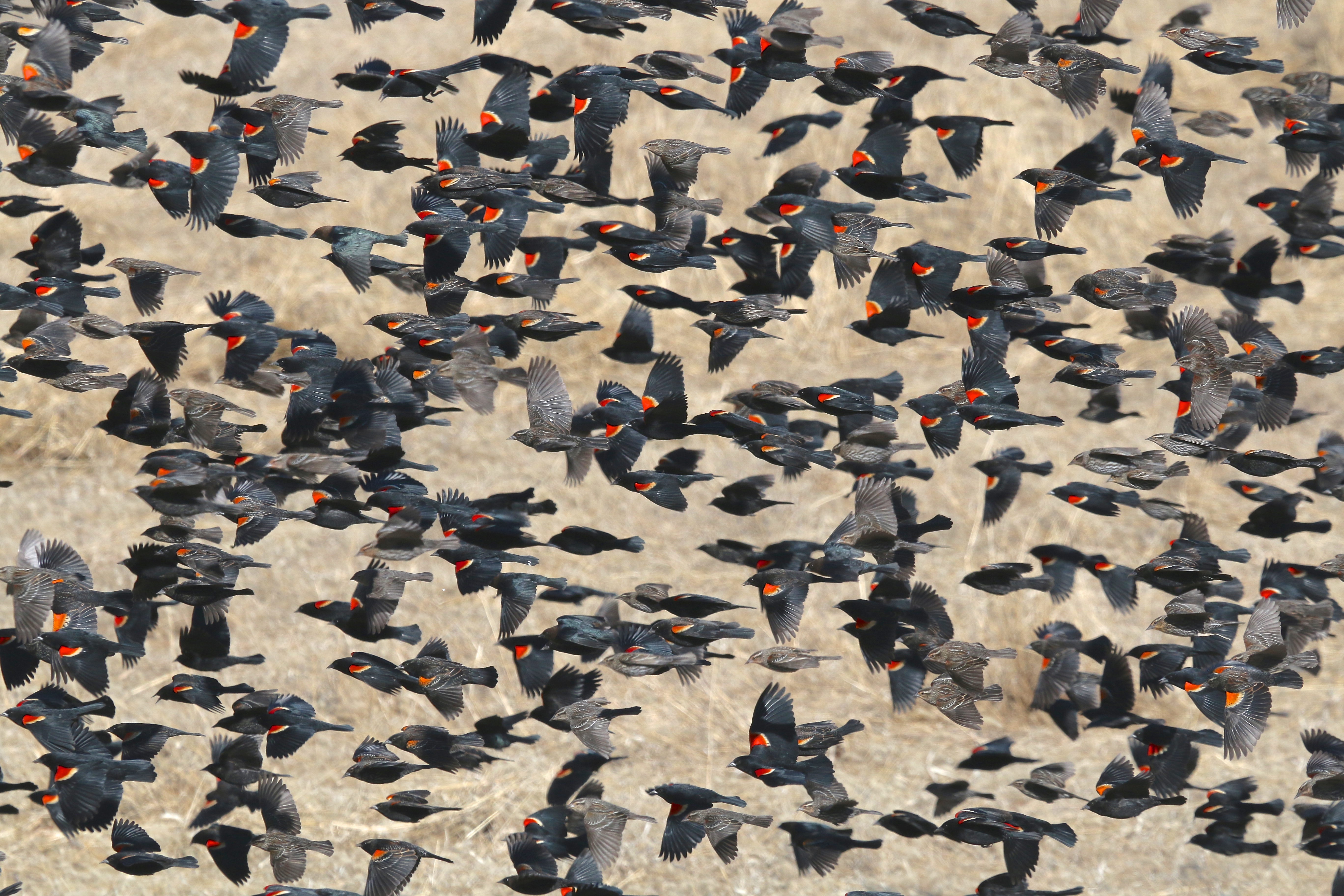 Wednesday was so cold and windy  that I did not stay out very long at all. Really, just long enough to get some shots of this mixed flock of blackbirds. This pic looks like all Red-winged Blackbirds, but when I was looking at the birds on the ground there were definitely some Brown-headed Cowbirds in the flock. 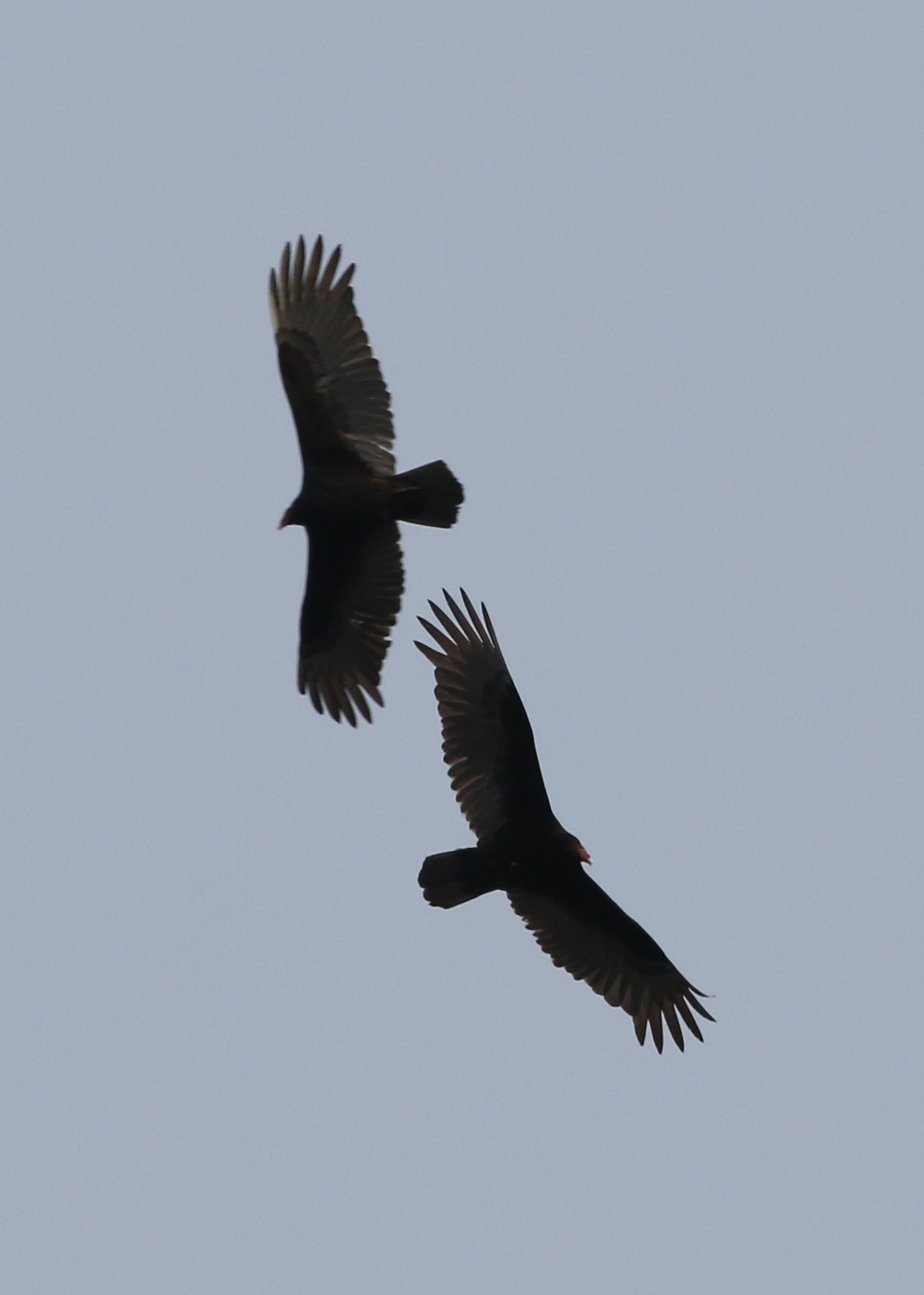 I actually got it together and did a post on Thursday from my visit to the Wallkill River National Wildlife Refuge but did not include this Turkey Vulture shot. See Thursday’s post here

I had Nature Watch Training at the Basha Kill in the morning and I got out for a little while in the afternoon. Notable observations included 3 Snowy Owls in the Black Dirt and the continuing flock of 400 to 500 Snow Geese as well. 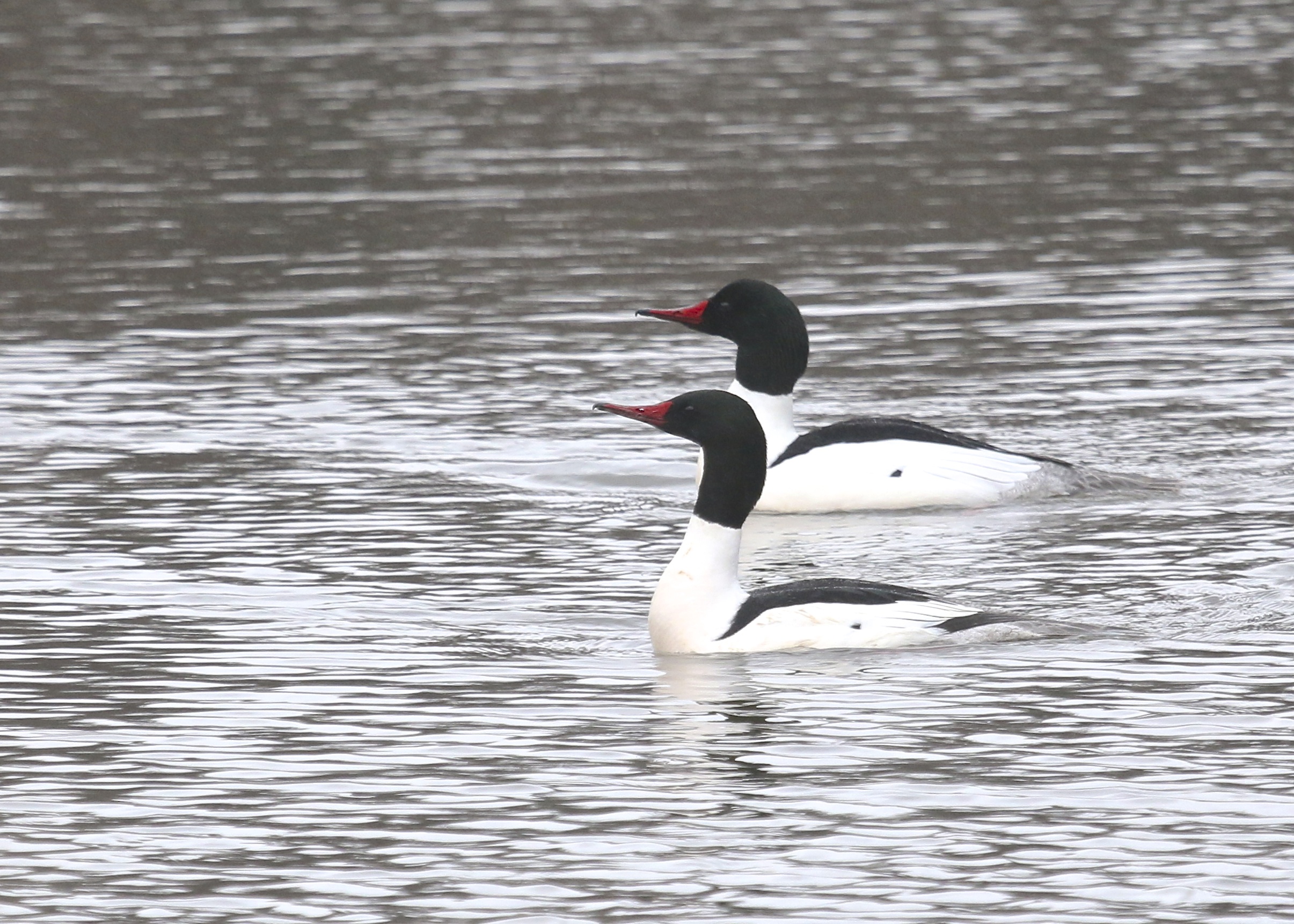 On Sunday, I only had a brief window to bird early in the morning. I headed over to the Hudson River to look for waterfowl. On my way over I stopped by the Heron Rookery across from Stewart Airport and noticed that several Great Blue Herons had taken up residence there. There was not many waterfowl to be seen from the Hudson, but I did have 15 or so Tree Swallows hunting over the river, seen from Plum Point. On my way back I stopped at Brown’s Pond, and although it was still mostly ice, there were some waterfowl to be found, including: Canada Goose, Mallard, Common Merganser, American Wigeon, Bufflehead and Mute Swan.

Tonight after work, I walked the Liberty Loop at Wallkill River National Wildlife Refuge for the first time in ages. It proved to be quite birdy, and a good showing of waterfowl was certainly the highlight:

Canada Goose (1500)
Wood Duck (35)
American Wigeon (4)
American Black Duck (30)
Mallard (60)
Northern Pintail (75)
Green-winged Teal (50)
Ring-necked Duck (120)
Hooded Merganser (6)
Other highlights included 14 Turkey Vultures that appeared as if they might have been moving through, and I also had an attractive looking Skunk that I was able to get a couple of mediocre shots of. It felt really good to be on foot, taking a hike, and out of the car for a change. It has been a long cold winter of car-birding.

Some of my shots from the past week:

The biggest news of the weekend was John Haas locating TWO CACKLING GEESE at Haven Road at the Basha Kill. Visit his blog to get the full scoop – it is actually an amazing story.

For myself, the best bird of the weekend was definitely the Red-necked Grebe. Additionally I had a few first of season birds this weekend: Tree Swallows (Basha Kill 3/23), Sharp-shinned Hawk (Celery Ave 3/22) and Eastern Phoebe (Algonquin Park 3/22).

I’m a day late and a dollar short with this bird – this is probably the most photographed bird on Facebook right now. Still, it is a beautiful bird to see and the pond in Algonquin park where the bird is located, is rather small, allowing for very good looks at this bird. Huge thanks to Bruce Nott for locating the bird and having someone post about it, even though he was still out in the field.

I took a quick but productive tour of the Black Dirt Region after work today. I was unable to relocate any large flocks of Snow Geese, but did find some larger groups of Canada Geese, and among them some gems:

Maybe there are still some large groups of Snow Geese around – there are certainly areas I did not get to tonight. Maybe this weekend will produce a Barnacle Goose or even a Pink-footed Goose? A Ross’s Goose? Who knows?

While I was at work on Thursday, I spoke to Rob Stone and John Haas; the Snow Geese in the Black Dirt Region continued in large numbers. They also continued to be restless, changing locations often. After work, I joined John Haas and Karen Miller as they scanned and photographed a group of 1,800 Snow Geese that included a single Tundra Swan as well. The birds picked up and we relocated them easily enough. The field that they had landed in made it easier to see the birds and after scanning them for a while we were confident that there was not a Ross’s Goose among them.

Just before noon today, Rob Stone called to let me know he had approximately 2000 Snow Geese at the Wallkill River National Wildlife Refuge, just across the road from the Liberty Loop. By the time I got out of work after 3:00, the birds had moved on. I got in touch with Curt McDermott and John Haas who were hot on the trail of the birds. They had relocated the flock (which had grown to 8,000 birds), but the birds lifted up once again. The flock had split into two groups and I followed Curt and John in my car as we (they!) relocated the larger of the two groups out in the Black Dirt Region. The three of us agreed that there were perhaps 5,000 Snow Geese in the group. We spent probably over two hours looking for a Ross’s Goose among them without success. With any luck the birds will stick around long enough and someone will find a Ross’s. 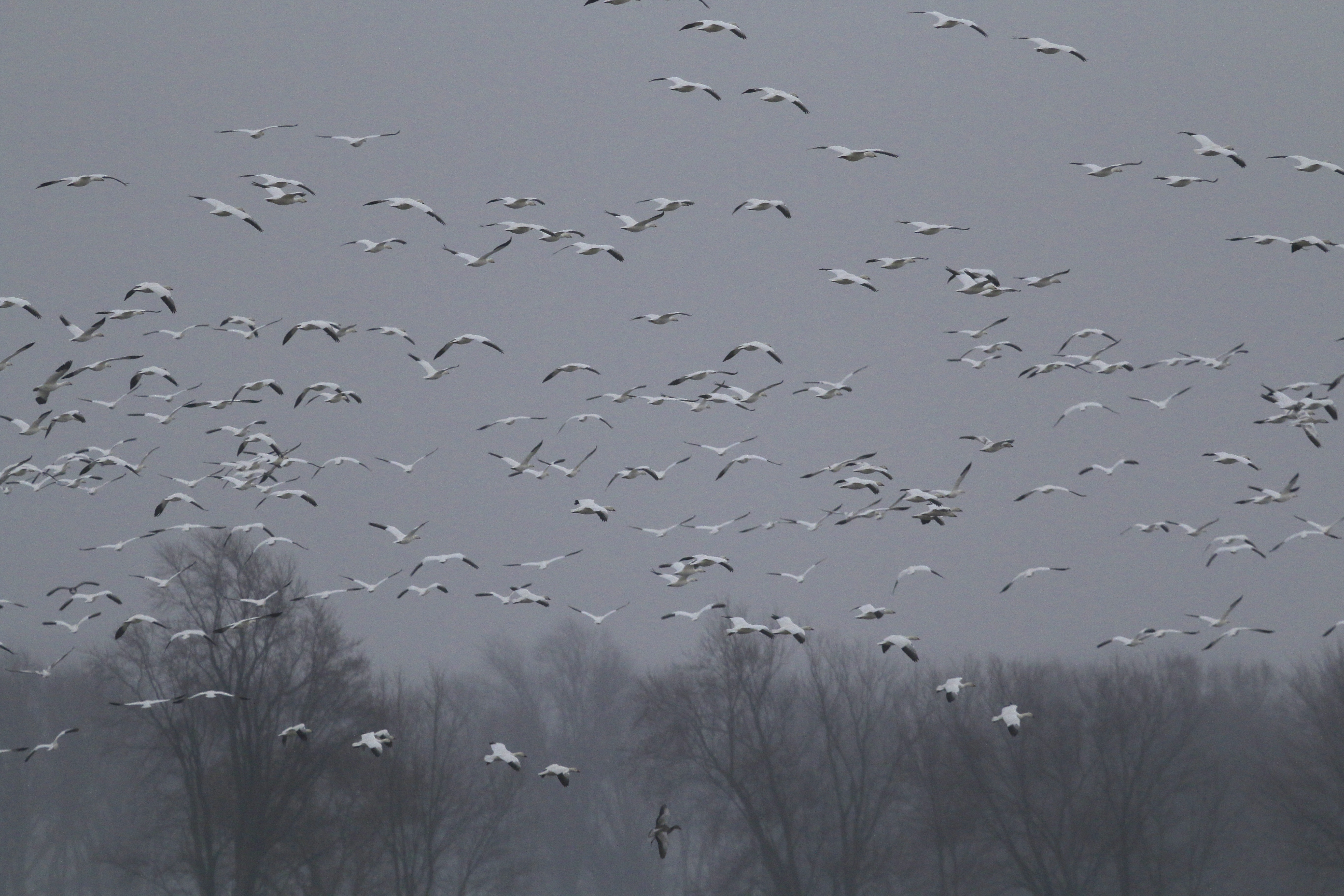 These photos of a Barn Owl in Orange County, NY are from early February, 2014. In the best interest of the bird, I have waited until now to post. I put the Barn Owl in the category of Birds I Never Thought I Would Photograph. What a pleasure and a privilege to see and photograph such an awesome and beautiful bird. 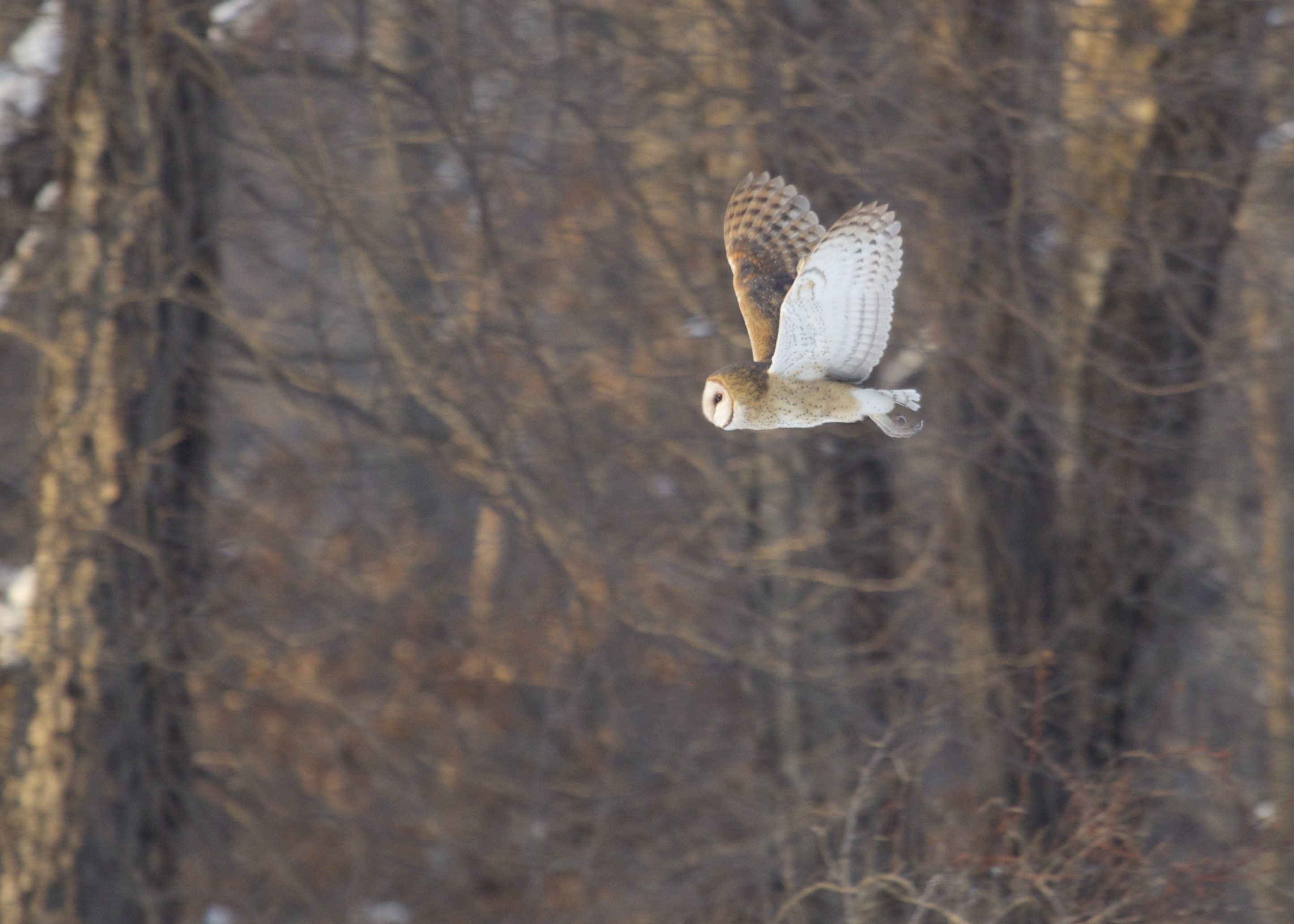 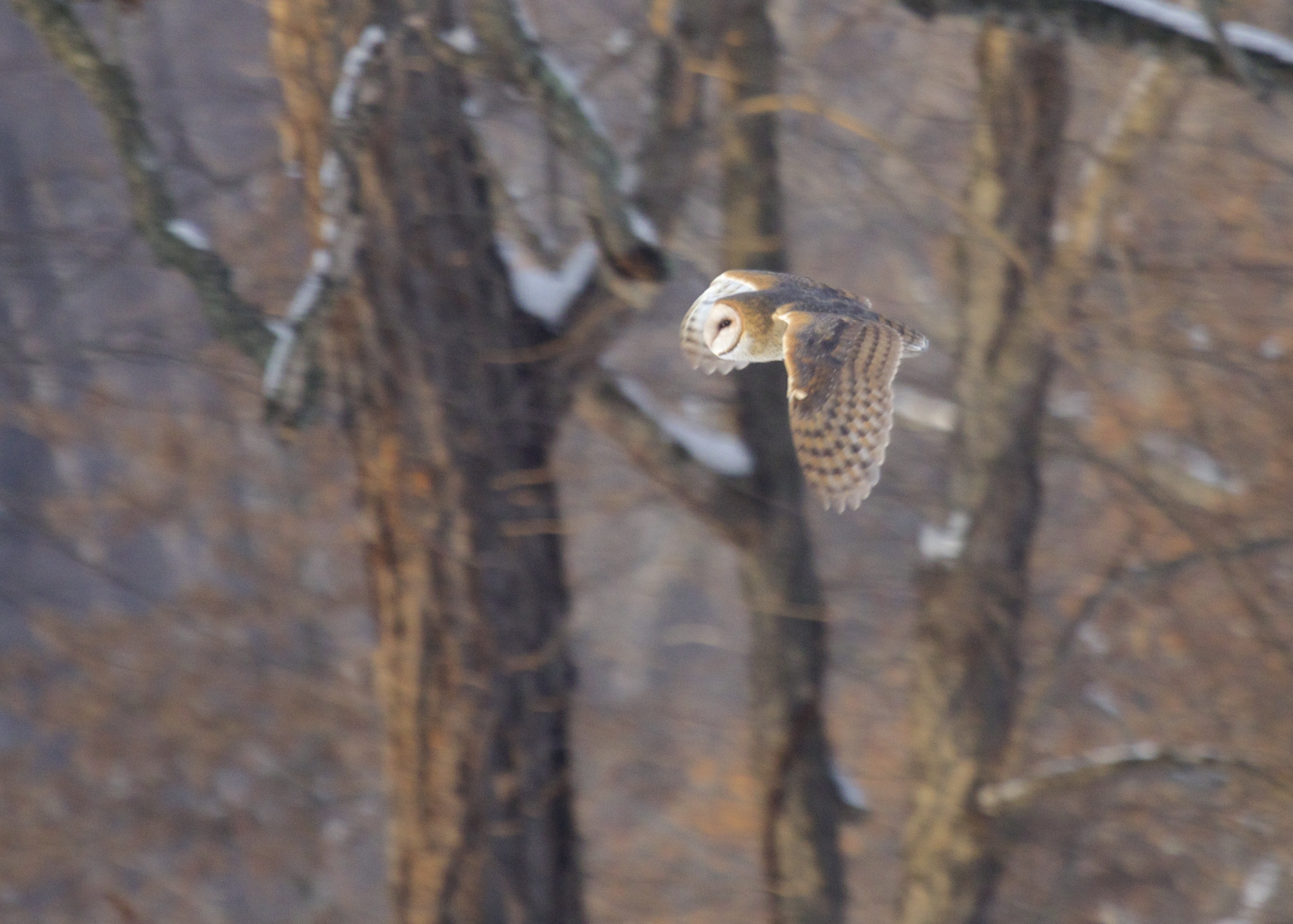 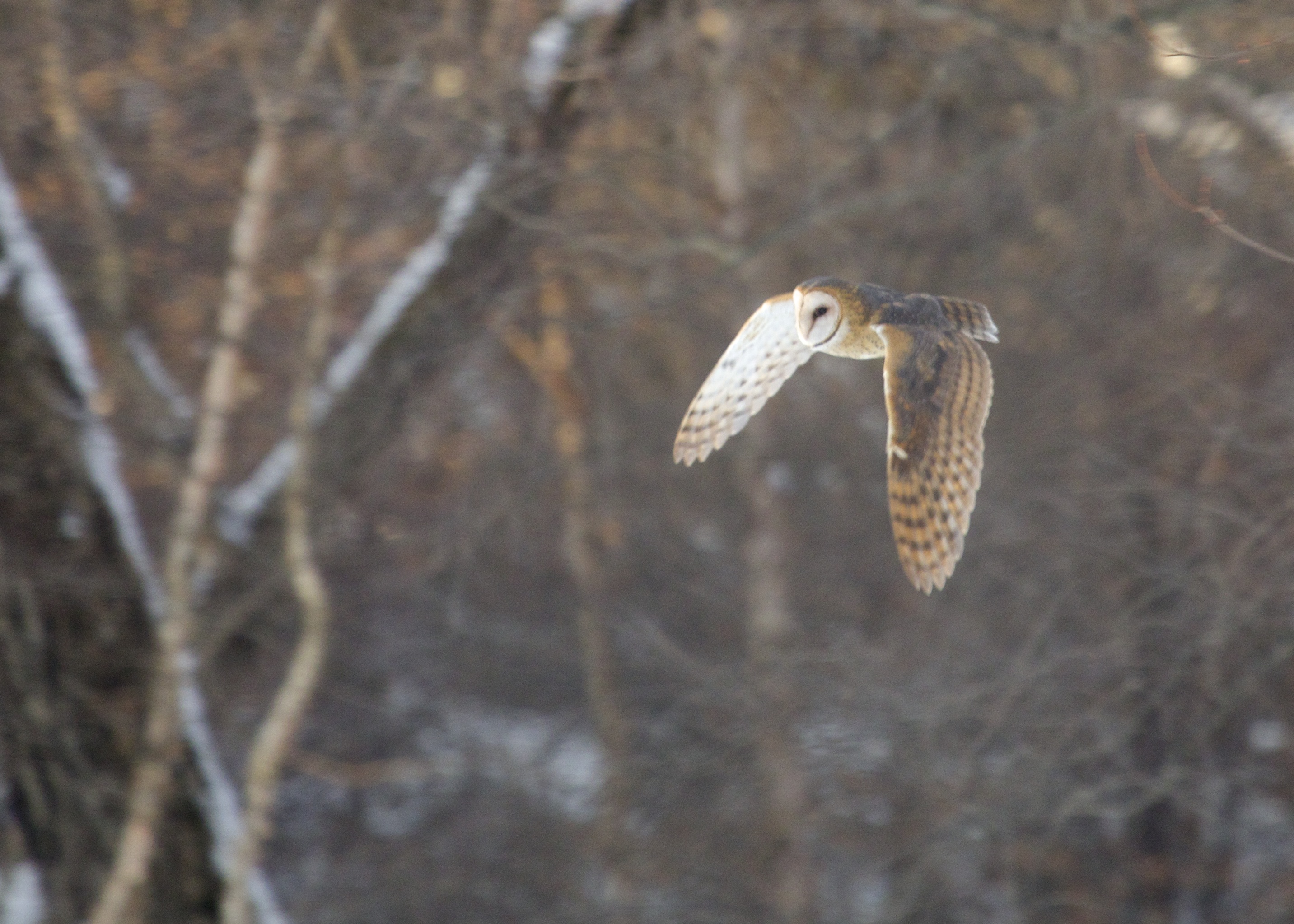 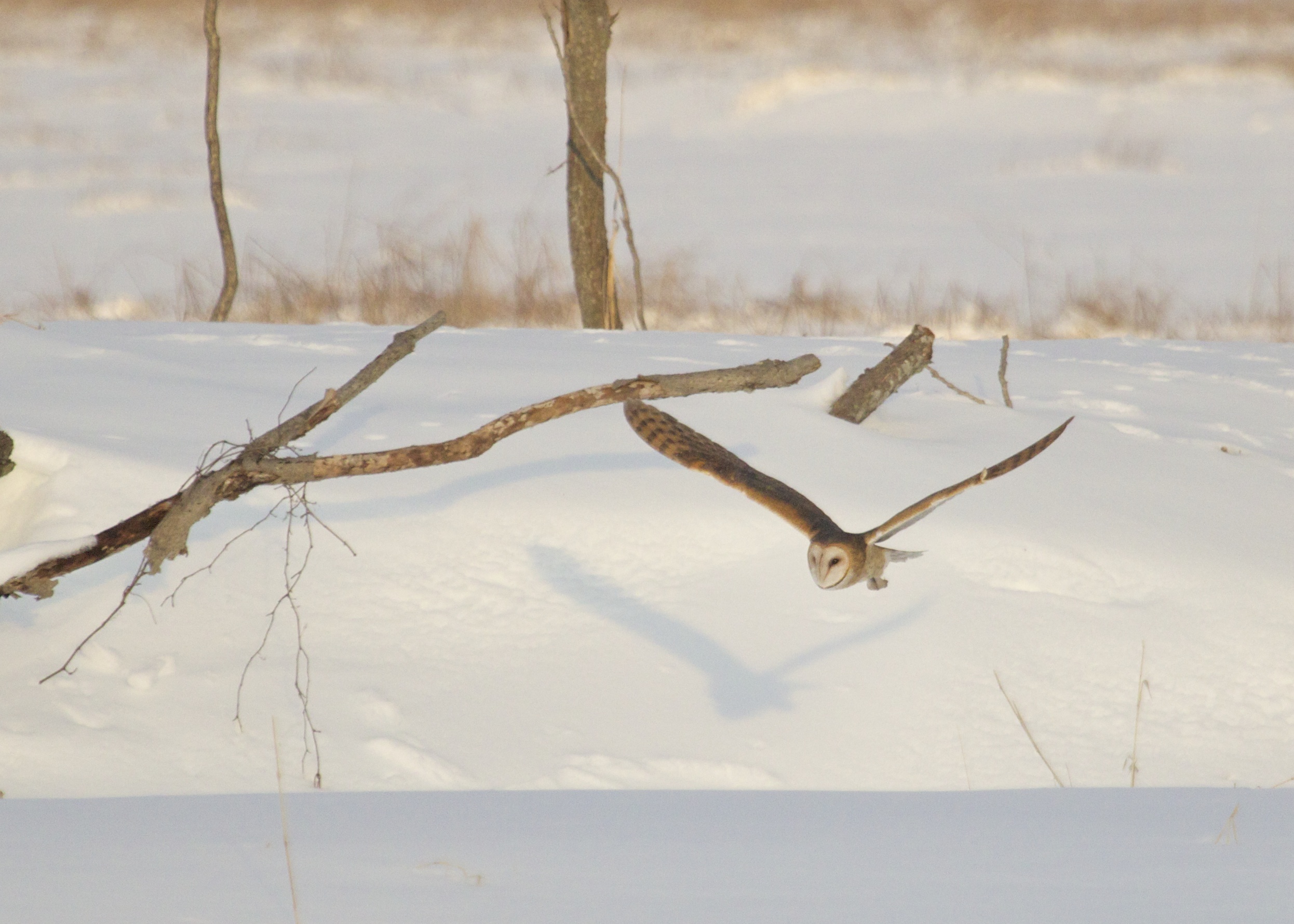 Curt McDermott was birding the Black Dirt Region today and located a total of 4 Snowy Owls. Additionally, I joined him at Onion Avenue, where he had 5 Greater White-fronted Geese and one Snow Goose.

I spent Thursday and Friday afternoons of this week in the Black Dirt Region looking for geese. I spoke to John Haas on Thursday during the day and he had located a Greater White-Fronted Goose out on Onion Avenue and a very large flock of mixed blackbirds. On Thursday evening I made it out and I found the flock of blackbirds easily enough; I estimate maybe over 5,000 birds in the flock? Also present were perhaps 2,000 Canada Geese, but I was not able to relocate the GWFG. It was a VERY cold night, which made it tough for me to stay out and sort through thousands of geese!

I went back on Friday and the flock of Canada Geese had grown to maybe 3,500 birds. Out in the fields, within the flock, I had what appeared to be one leucisitic Canada Goose, one Canada Goose hybrid (maybe with a greylag?), many Mallards and American Black Ducks, 3 Wood Ducks (!), and I had 2 Snow Geese that flew over, circled, but never joined the flock. Still no sign of the Greater White-fronted Goose though. Additionally, the number of black birds was down (perhaps 800?), but they were still present as well.

It was an absolutely gorgeous day and I could barely wait to get out of work to do some birding. Today was the first day that felt like spring to me and I took advantage by heading over to Warwick, NY to look for waterfowl. My first stop was at the pond across from Town Hall where I did well, accumulating 7 species waterfowl: Canada Geese (15), Mallards (12), Ring-necked Ducks (22), Wood Ducks (3), Gadwall (5), Hooded Mergansers (3) and a single Green-winged Teal.

My next stop was at Schervier Pavilion in Warwick, which has a small pond that apparently gets Hooded Mergansers regularly. Nine were present today and they were joined by 2 Canada Geese, 4 Mallards, and 1 Ring-necked Duck.

Finally, I did some driving around the black dirt region to see what I could find. It ended up being a banner night with three species of owl: Snowy Owl (1), Short-eared Owl (3), and Great Horned Owl (1 heard). Additionally, I got my first Killdeer (3) of the season for Orange County: