I stopped by my “home course” here in Goshen after work today like I often do. It was a gray cool afternoon with a moderate amount of bird activity. Turkey Vultures must be moving through pretty good right now, I’ve been seeing many on my daily commute and I had 11 at the sanctuary today. I also checked Hawkcount.org and saw that they had 555 Turkey Vultures go through the Derby Hill Hawk watch yesterday (I might make it out to Derby Hill this coming weekend, so I wanted to see what birds were passing through). Duck numbers and variety were down a little bit from last week. In all, I stopped by for just about an hour and I had 23 species:

In spite of the cold and windy weather, yesterday morning I attended John Haas’ waterfowl walk along with 18 other hardy souls. We were not disappointed, as there were many bird species present, waterfowl and otherwise. Visit John’s blog, The Basha Kill Birder to see his post which contains his account and a list of all species. Normally for me the highlight of any birding outing has to do with seeing and identifying a particular species, or maybe seeing some sort of new behavior. In this case it was being able to spend a few hours with John, who has a wealth of bird knowledge that is incredible. He is a fantastic teacher; he touched on basics for the beginners in the group, but also got more in depth for some of the more experienced birders in the group. On top of all this, John is a “bird magnet”. We were not on Haven Road for very long when he spotted an accipiter flying overhead…could it be? Yes! A NORTHERN GOSHAWK!

We got good looks at most of the waterfowl, but only because John and several other people brought scopes. Most of what we saw was quite distant, making it tough for photos. Here are a couple of Common Goldeneyes, a life bird for me on a visit to the Basha Kill earlier in the week:

Huge thanks to John for a very enjoyable and rewarding outing, and also thanks to my birding buddy Karen Miller for the group shots. Here’s a shot of me and the rest of group:

Later in the day I spent some time out at the Shawangunk Grasslands in the south blind. It was my first time in that blind and it paid off as I got many good looks at the “Gray Ghost”: 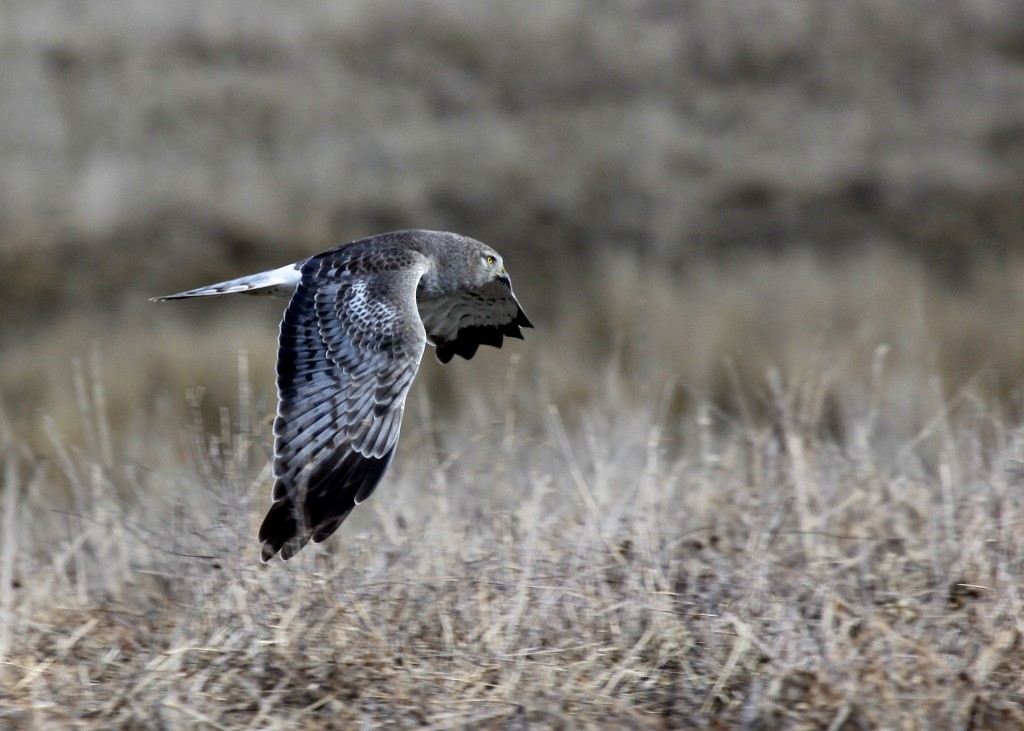 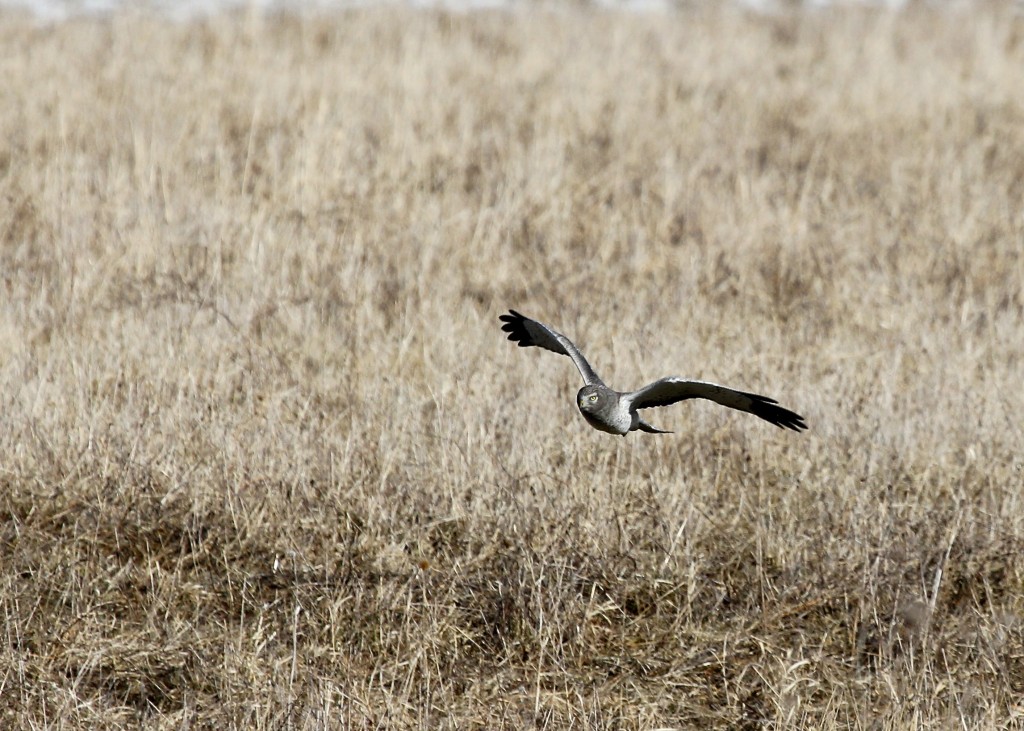 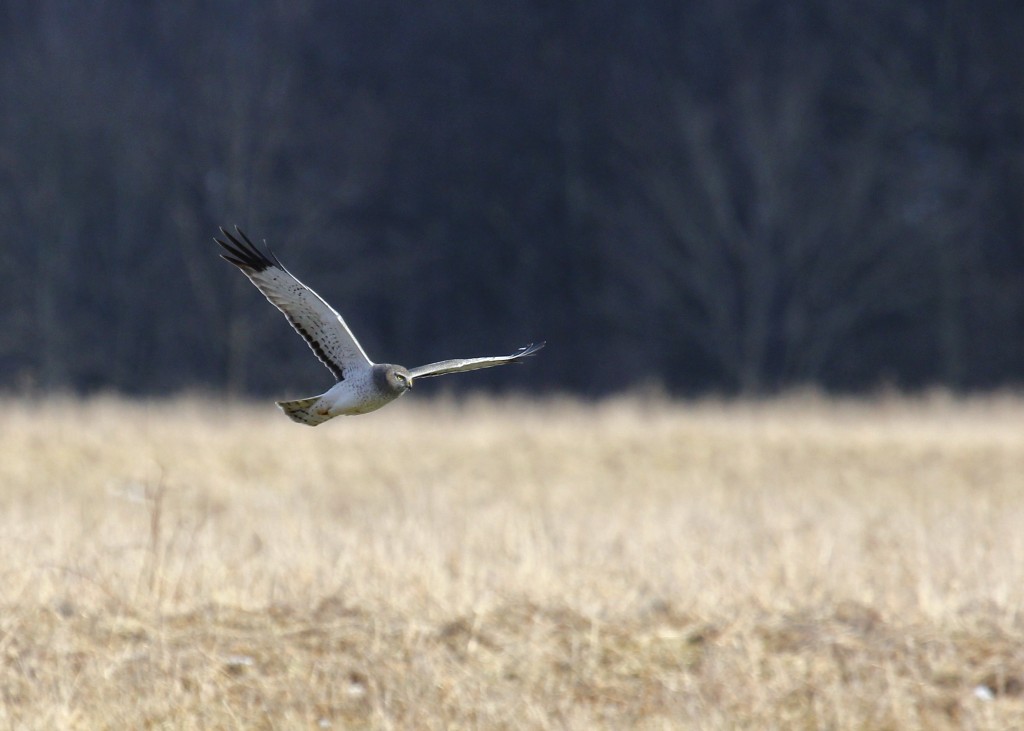 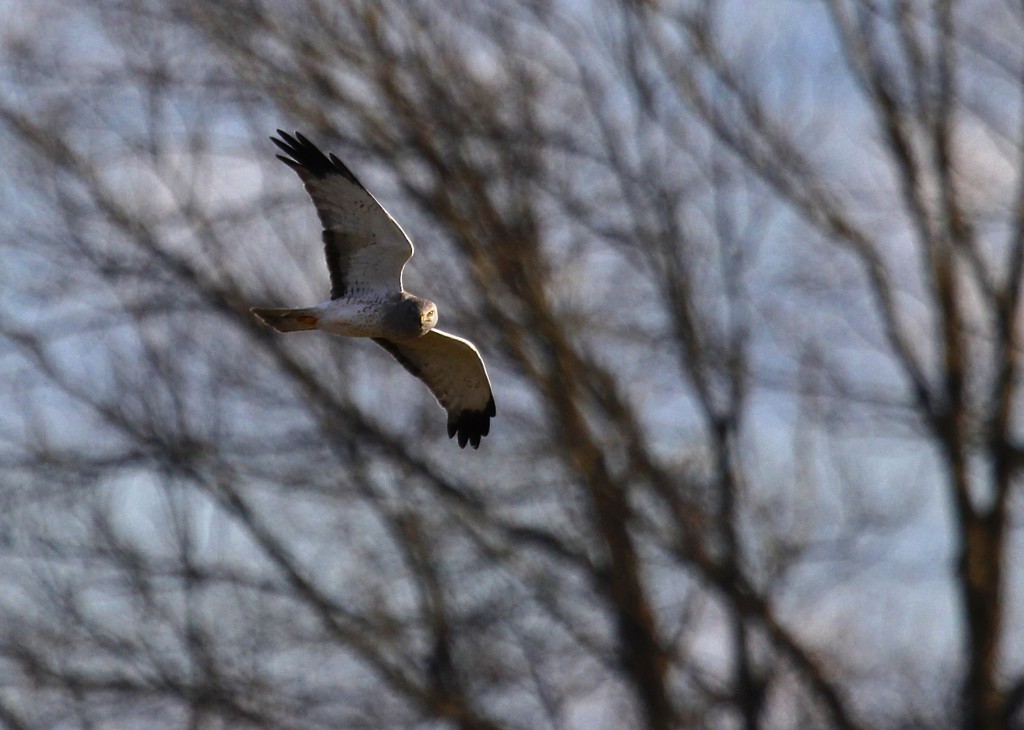 I went out to the grasslands yesterday after work in response to a post to the Mearns Bird Club by Ken McDermott. A couple of days earlier, he had eight Short-eared Owls at 3:00 in the afternoon. I was thinking that I had seen my last SEOW of the season before I read the post, though I am not sure when they actually head north. I figured I would give it a try and see if I would get lucky. I did not have any luck with the owls, but it was still a good visit with an interesting combination of what I consider winter birds and spring birds. The Common Redpolls and Horned Larks are still lingering, but I also had Red-winged Blackbirds and my first of season Eastern Meadowlark:

Today I did my usual brief visit to 6 1/2 Station Road Sanctuary, where things were a little less birdy than my last visit, but I still had a good list:

I haven’t been feeling well and actually went to the doctor’s today. On my way back I made a short but, oh so sweet, stop at 6 1/2 Station Road. During my brief visit, I identified 17 species in addition to the adult Bald Eagle pictured above. A nice variety of waterfowl make up exactly half of my list:

I made my way out to the Camel Farm this morning, stopping at some of the likely places to find geese, but did not have any luck. The Camel Farm was another story, with approximately 3,000 Snow Geese and more than a few birders present. After about an hour of scanning the Snows for Ross’s Geese, a birder that I don’t believe is local and that I’ve never met, located a Ross’s Goose. We got distant but good looks at this bird that I believe is a first winter Ross’s Goose. The bird was noticeably smaller than the surrounding Snow Geese and the more round head and smaller bill were easy to see. The bird also had a gray wash at the base of the neck, which matches the first winter bird as shown on page 43 of The Crossley Guide. We lost the bird the next time the birds picked up and flew. I tried for the next half hour or so to relocate the bird without any luck.

John Haas showed up not too long after that and located the adult Ross’s Goose in the above photo. It was remarkable really, John found the bird inside of 10 minutes and the birds flew moments after he found it. Once the birds settled down again, John found the bird again, this time in probably less than 5 minutes! This time everyone present (there were many birders there) got a good look at the bird. Thanks again John!

The other highlight of the morning was three Tundra Swans, also at the Camel Farm:

After the Camel Farm I went to my usual spot to try to get some photos, Wallkill River NWR. I walked part of the Liberty Loop and did well with seeing many ducks (two Northern Shovelers were my FOS), and I managed a couple photos of a male American Kestrel.

I went out yesterday and today looking for geese. The Ross’s Goose that Rob Stone and John Haas found yesterday was at the top of my list, but anything out of the ordinary would do. Last night there were nearly a thousand Snow Geese at the Camel Farm, but I did not locate a Ross’s among them. Tonight I had nothing but Canada Geese, but I did get this shot of a Killdeer.

This is a really good song with a video that I thought was very appropriate for all the geese that I’ve been seeing lately. I watch this and I am reminded of how badly I want to see a Barnacle Goose! Click the link below:

Nick Cave – To Be By Your Side

Today I went out in search of the Greater White-Fronted Goose that had been seen in the same area as the Pink-footed Goose. I cruised by Pierce Circle first and found no geese present. My second stop was Breeze Hill Road and Lynch Avenue, where after about 20 minutes of searching I located the GWFG among 200 or so Canada Geese. The bird was foraging on the bank beyond the pond at first and then moved down into the water with approximately 40 Canadas. I got really good looks at the bird in my scope, but it was quite a distance from the road. What a weekend it has been, three really good birds all in Orange County! Here is a heavily cropped long distance shot of the bird:

Update 3-7-13, here’s one more photo of the Greater White-fronted Goose:

It was a nice sunny day, so I wanted to try to actually get some decent photos, so I headed to Wallkill River NWR. Karen Miller eventually met me over there and we walked the Liberty Loop. We had a lot of birds and I had some decent results with the camera:

What do a Pink-footed Goose and a Golden Eagle have in common? I saw both of them in Orange County on March 2, 2013.

Wednesday through Friday evenings after work, I tried for the Pink-footed Goose that has been seen in the black dirt region of Orange County with no luck. The bird had been relocated several times by Curt McDermott, Rob Stone, and John Haas, but each day by the time I got out of work it had moved on. On Saturday morning Tricia and I went out to try for the PFGO. We hit all of the spots where the bird had been seen in the past few days but did not locate it. We ran into John Haas on our second visit to the Camel Farm and he reassured us that the bird would be found. We moved on and while we were at the Wallkill Wildlife NWR, John called – he had relocated the bird! We rushed over to join him and let Karen Miller know so she could meet us there. We all had good looks at this beautiful bird on the ice, preening away. The photos are a bit distant, but I really like to see this bird among the Canada Geese. It’s interesting how easy it is to see how different the PFGO is from the Canadas, but how hard it is to initially pick it out from the crowd. Thank you to Rob Stone, Curt McDermott for keeping me posted of the birds whereabouts, and huge thanks to John Haas (The Bashakill Birder) for relocating the bird on this day, a life bird for both Karen and Tricia.

After the PFGO excitement, Tricia headed home and I headed out to the Basha Kill with Karen. We did well there, seeing many birds with the highlight being a pair of immature Bald Eagles flying over the kill, one of which was just a gorgeous bird.

We decided to take a drive and try for the Golden Eagle that has been seen at Storm King State Park. We were not entirely sure where the bird had been seen, so I was doing some research while Karen drove. We eventually found the correct parking area off of Route 9W and the task of finding the GOEA seemed overwhelming. We did not have much information to go by, just that a scope was necessary and that the bird had been seen in a pine tree between the parking area and the river. That is a lot of area to cover, it was really cold and windy, and it had started snowing. We were just about to give up on it when I located the bird in my scope. It was perched in a tree on the north ridge, pretty close to the river. It was a distant view, as expected, but what an incredible bird! This was my first time seeing a Golden Eagle perched and it was awesome.