What a spectacular little bird! Huge thanks to everyone (there were many!) involved in locating and re-locating this beautiful rarity, especially Rob Stone, Curt McDermott, John Haas and Ken McDermott. What a great day to be a birder! 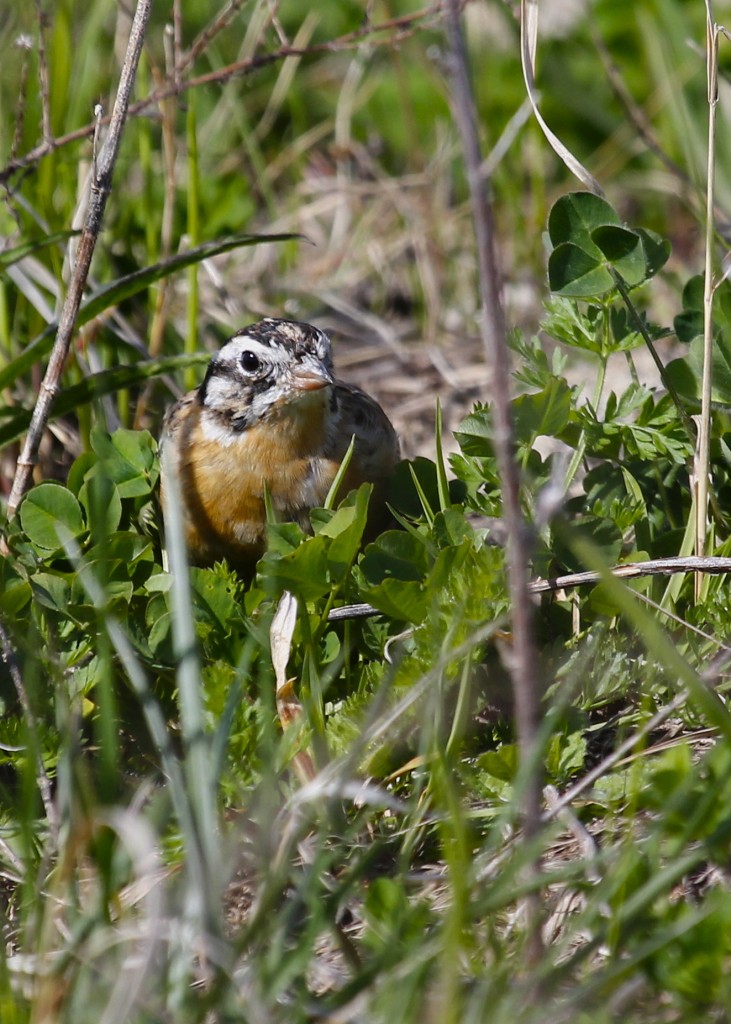 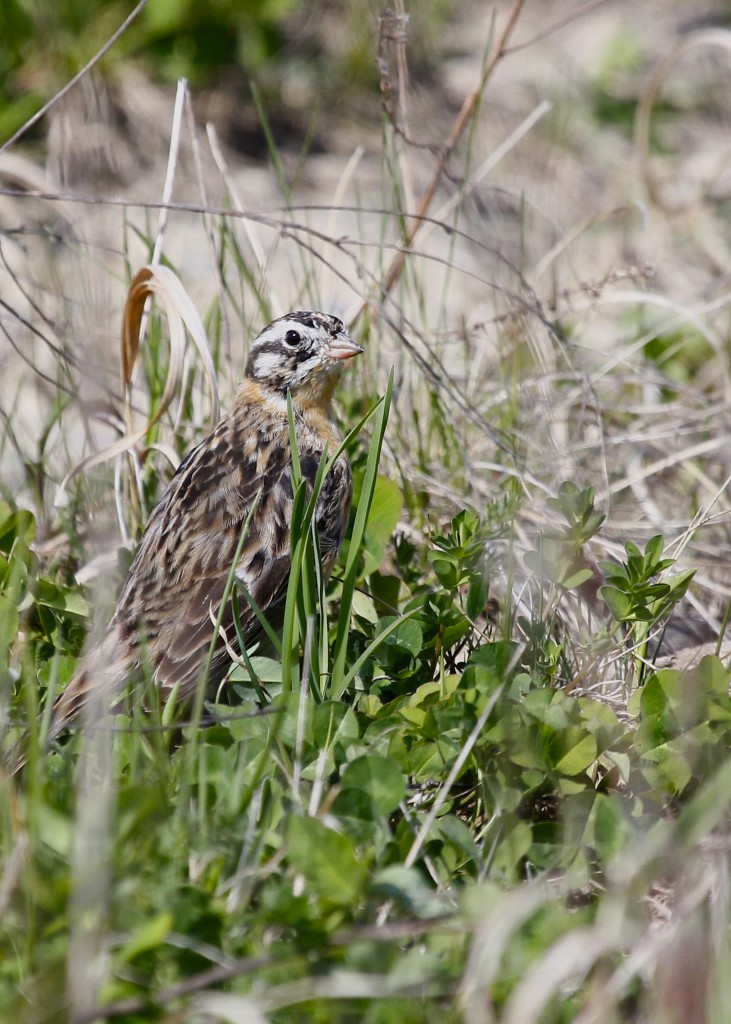 On my way to the bank this afternoon I spotted my first Green Heron of the season at the small pond right around the corner from our house. I know I say this about a lot of birds,  but Green Herons really are one of my favorite birds; I look forward to a summer of having them at that pond.

On Monday evening, Herb Stein posted that he had seen two Sandhill Cranes and a Glossy Ibis out at Wallkill River NWR. I always enjoy walking the Liberty Loop, so today I went to see what I could find. It was a nice warm evening, a little bit windy, but very pleasant. It made for a nice afternoon of birding. I had 23 species during my walk, with two highlights. The best bird of the night was definitely a single SANDHILL CRANE. What a fabulous bird, I feel so lucky to have seen this bird and to have managed a couple of distant photos, which I have cropped:

The second highlight for me was a DUNLIN in adult breeding plumage. This bird confounded me until I got home and looked it up. This bird was pretty far out, so here again is a distant photo that has been cropped:

What a great night of birding! Many thanks to Herb Stein for posting. Here’s my list for the evening: 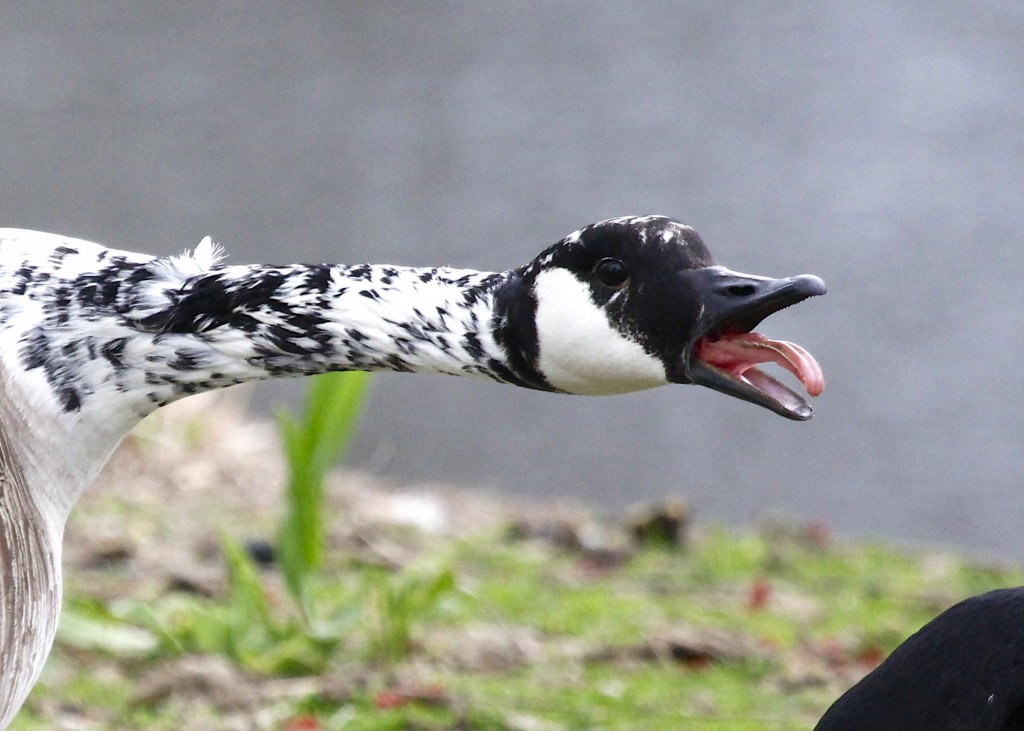 I only have time to post a quick photo right now, huge thanks to Rob Stone and of course Danny Messina who found the bird.

I had a really nice afternoon of birding after work on Monday. The weather was nice, cool and sunny. My first stop was at Glenmere Lake to see if anything interesting had come in. There was still a pretty good collection of waterfowl present, including Green-winged Teal, Ring-necked Duck, Lesser Scaup, many Bufflehead, and the highlight was definitely a  a single TUNDRA SWAN floating with a group of Mute Swans.

Afterwards, I headed over to my favorite spot, Wallkill River NWR, to walk the Liberty Loop. There was plenty of activity there; I spent most of my time looking at waterfowl and shorebirds. I struggled with the shorebirds as usual, but it was a lot of fun getting my first good dose of shorebirds for the year. I ended up with 28 species, and it was really nice to just walk the loop and enjoy being outside.

… is another life bird for me! I went out to Glenmere Lake this afternoon to try for the Long-tailed Duck again and to see if the second round of storms brought in any new birds. I was very happy to find this Red-necked Grebe: 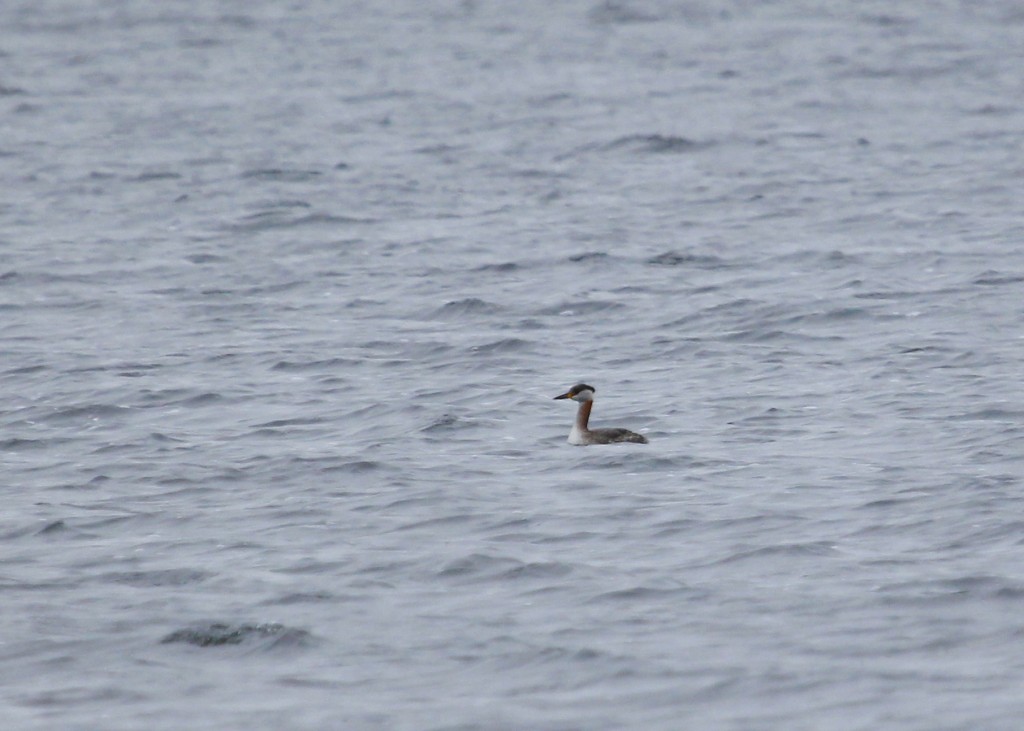 This is another distant shot that I have cropped pretty heavily. It has been a little frustrating that these birds are too far away for decent photos, but that is easily outweighed by the excitement of seeing a new species for the first time. There were fewer birds present today, but it was still a productive stop:

Thanks again to Rob Stone for turning me on to Glenmere Lake, it has been awesome for me this week!

…is a life bird for me. Thanks to Rob Stone alerting me, I was able to get to Glenmere Lake in Florida NY today after work to see some really good birds, including a beautiful Long-tailed Duck. Here is a very distant photo, heavily cropped:

When I got home I read John Haas’ post at Bashakill Birder and learned that due to the thunderstorms that passed through last night, there was a major fallout of birds. John wrote specifically about Sullivan County, but I imagine that I saw these birds in Orange County for the same reason. I had never birded at Glenmere Lake before, but it is now on my radar for birding spots. Here is my species list for the day:

Last Friday afternoon at the Shawangunk Grasslands, I had my first real experience trying to photograph American Kestrels for any extended amount of time. I was hidden in the blind closest to the pond where there is a new Kestrel box.

Both birds were perched in a tree near the box when I arrived at the blind. The male left shortly after my arrival and was gone for nearly an hour. During that time the female did not leave her perch, she faced into the strong gusts of wind and preened. When the male came back the two birds took turns going to the box. It is unclear to me what they were doing, maybe they were checking it out to see if it would make a suitable nesting site?  I thought maybe they were bringing in nesting materials, but I looked at my photos and I didn’t see either bird carrying any nesting materials. I have since read that American Kestrels do not use any nesting materials.

Between visits to the box the male made many visits to a patch of grass very close to the blind. Again, I’m not sure what he was doing; I have discovered in the past that photographing birds makes it much more difficult to observe their behavior. This seemed to be happening a lot on this day. 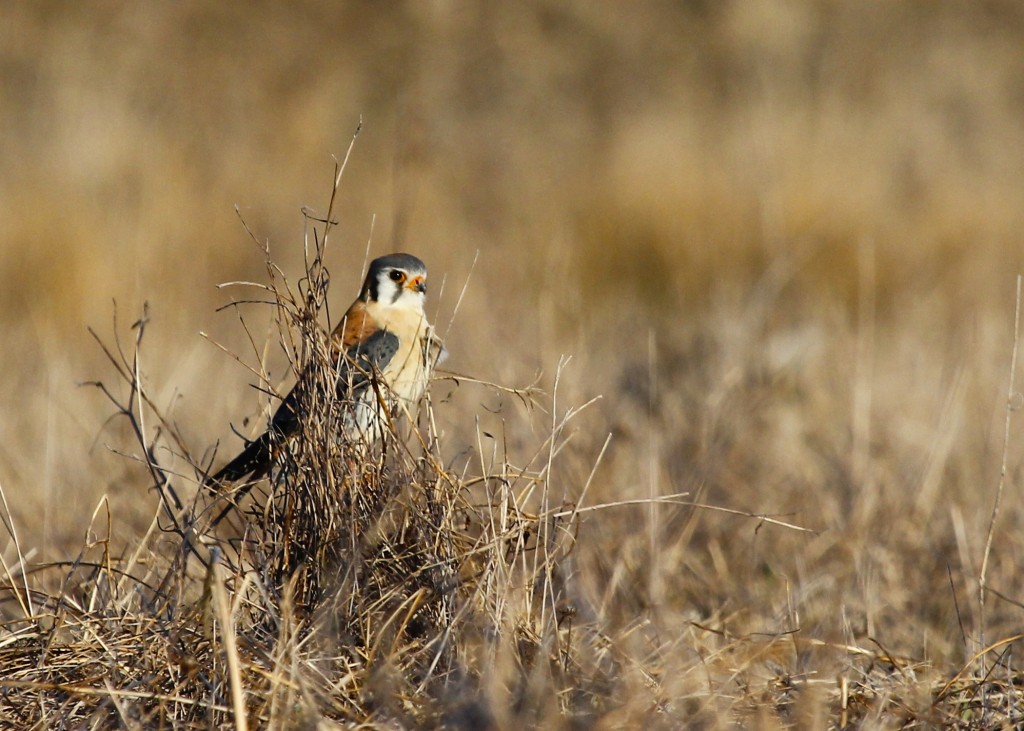 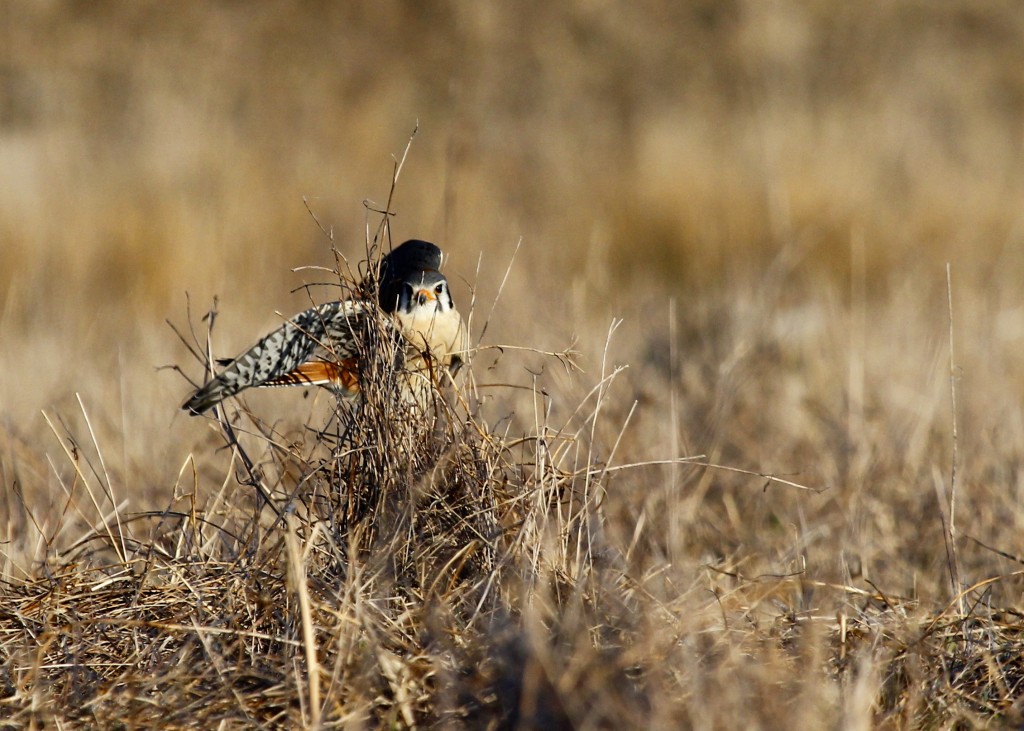 I was given many good opportunities for flight photos as the male was flying between the tree, the box and the clump of grass right by the blind. I found out quickly that it was much more difficult than tracking Northern Harriers and Short-eared Owls, both of which are much bigger birds. I was learning as I went, and did get a few decent flight photos. 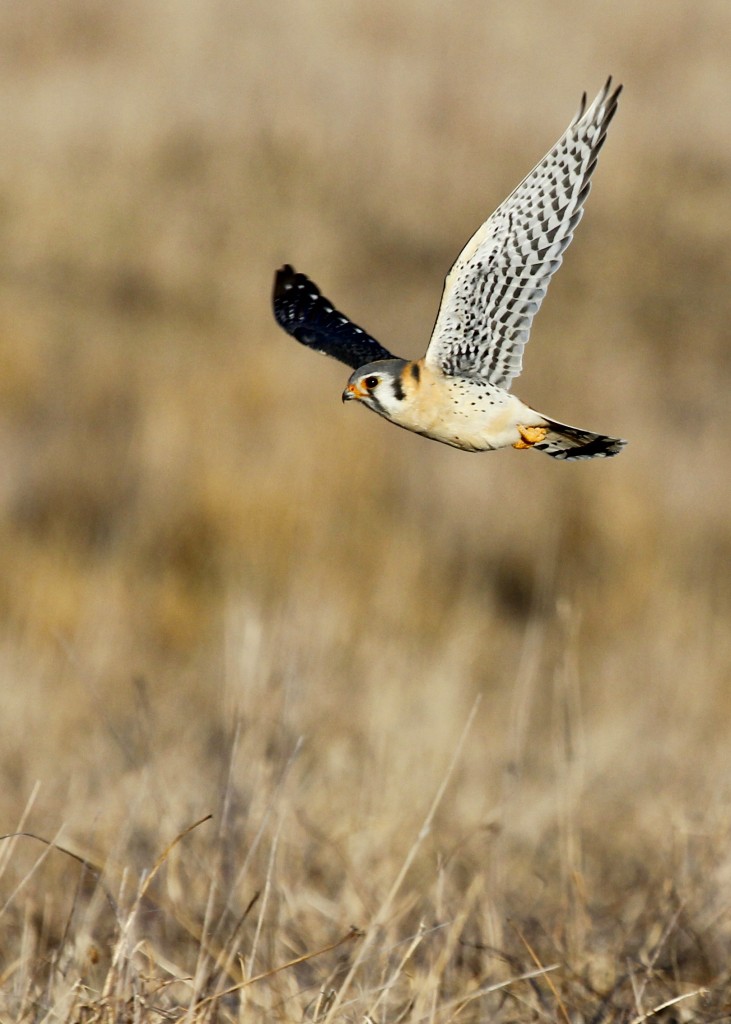 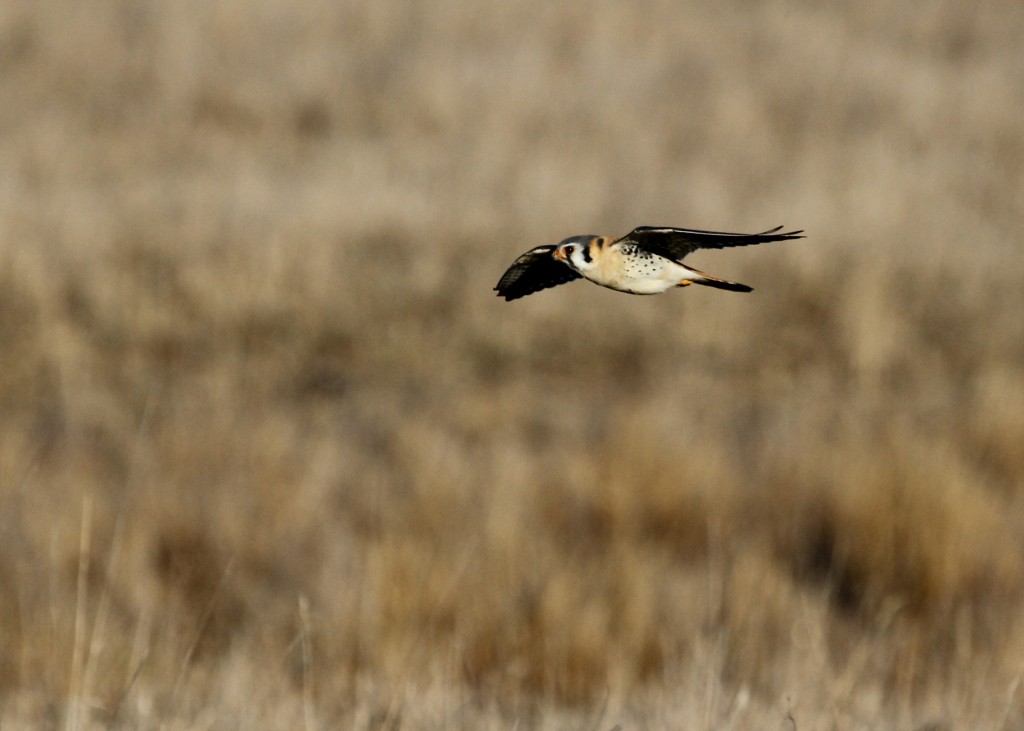 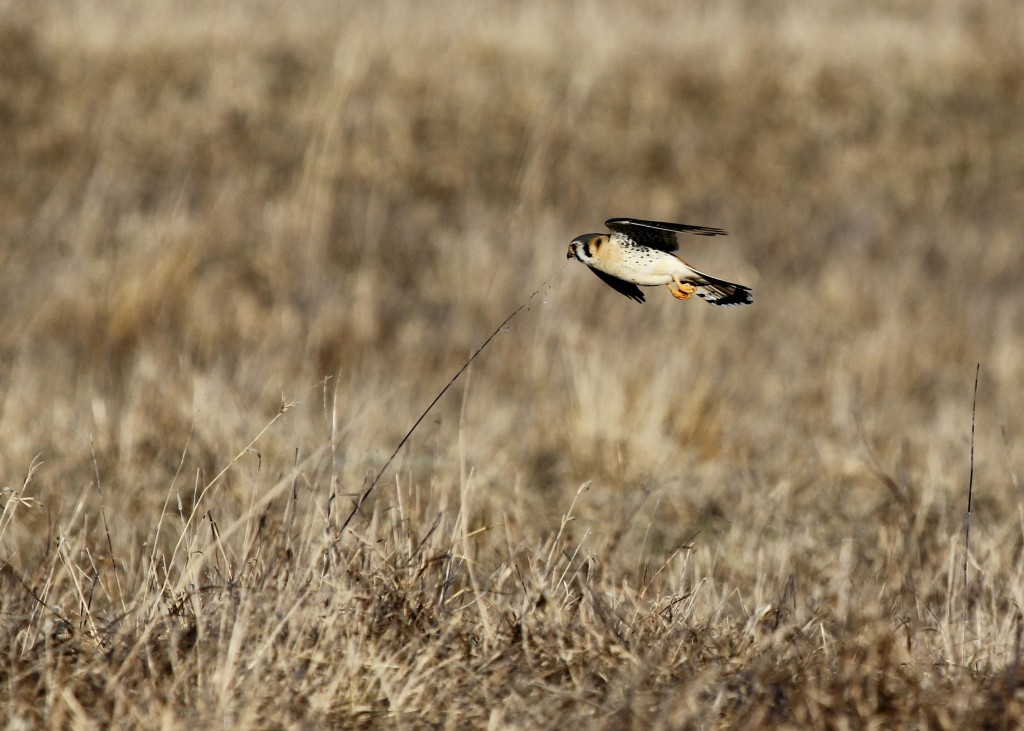 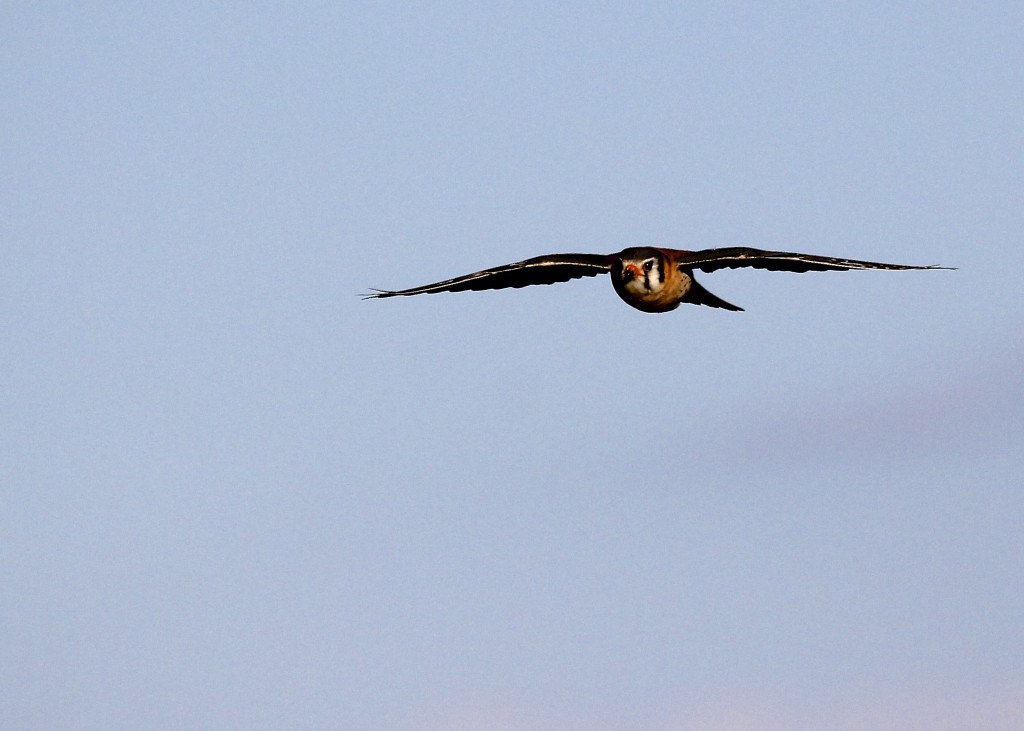 Both birds were perched once again in tree nearest to the blind. The male left again and I lost sight of him. He returned a couple of minutes later and I thought that they were mating as I took photos. What actually had happened was a food exchange, which you can see in the photos below. I read on Hawk Mountain’s website that the male American Kestrel will sometimes bring food the female, in an effort to entice her into a nesting site he has chosen. I could be wrong, but it looks to me like he brought her a bat. I have included a heavily cropped image to show the prey. The female took her meal to a shady branch and I watched her enjoy her meal.

This was all very interesting to witness, and I feel like I have some reading up to do regarding American Kestrels. If anyone has any insights, please comment.

I hit the Shawangunk Grasslands Friday evening and sat in one of the blinds for a few hours. I finally got lucky with the Short-eared Owls. It is always such a rush to shoot these birds, especially when they come up right before sunset and the light is changing very quickly. I was happy to get one more chance to get some SEOW photos this year. 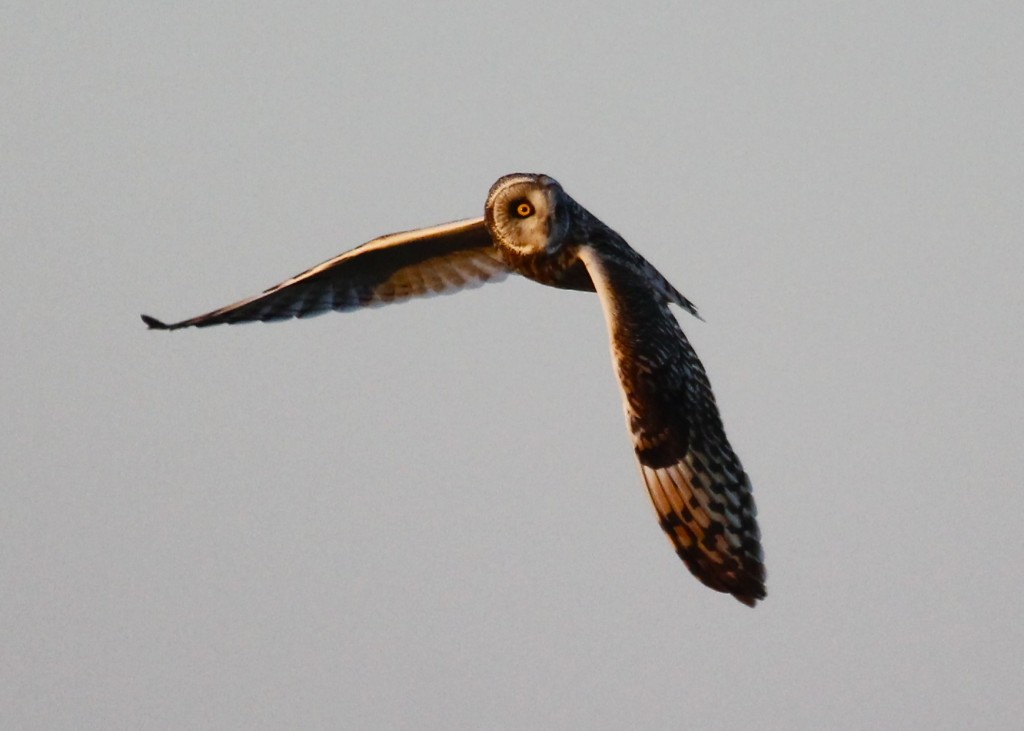 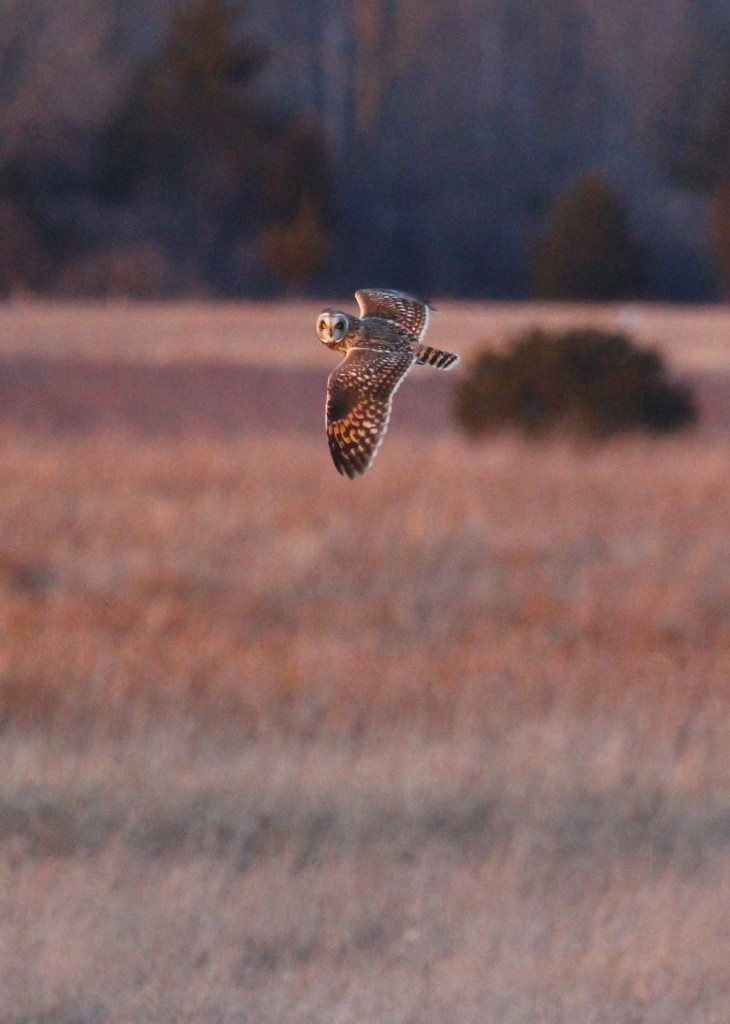 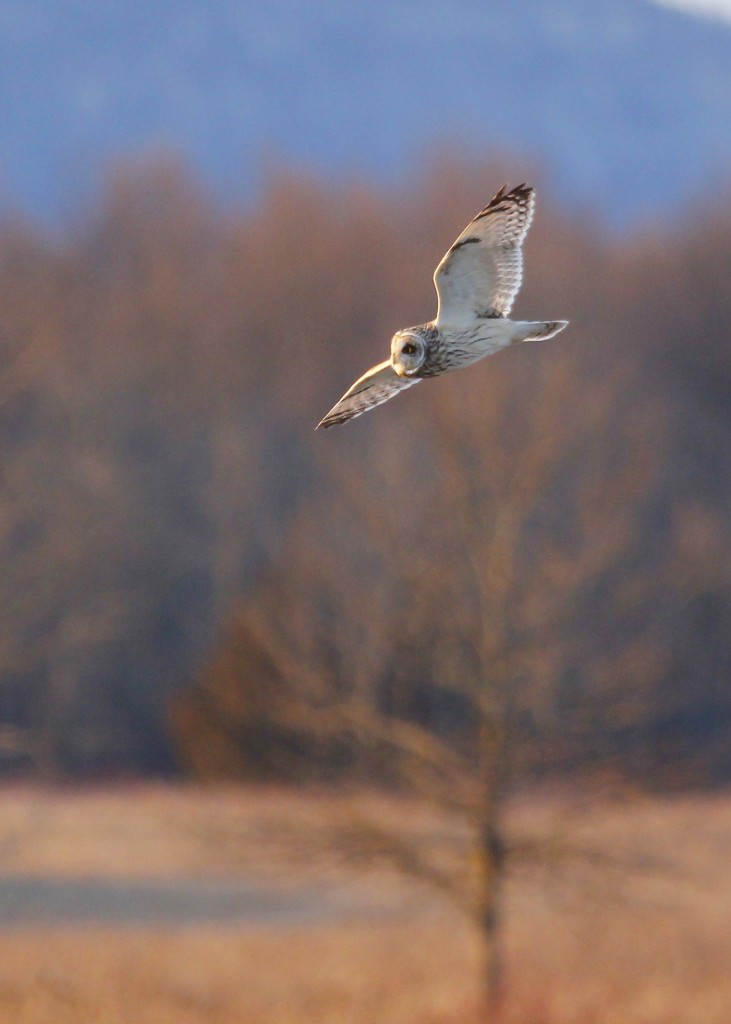 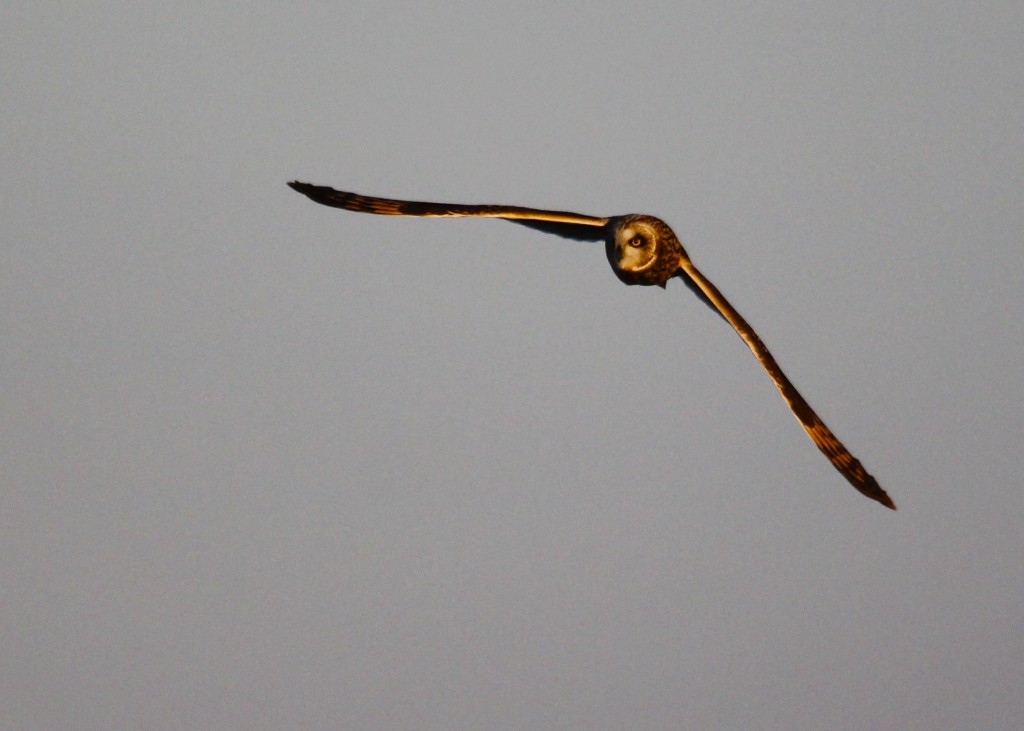 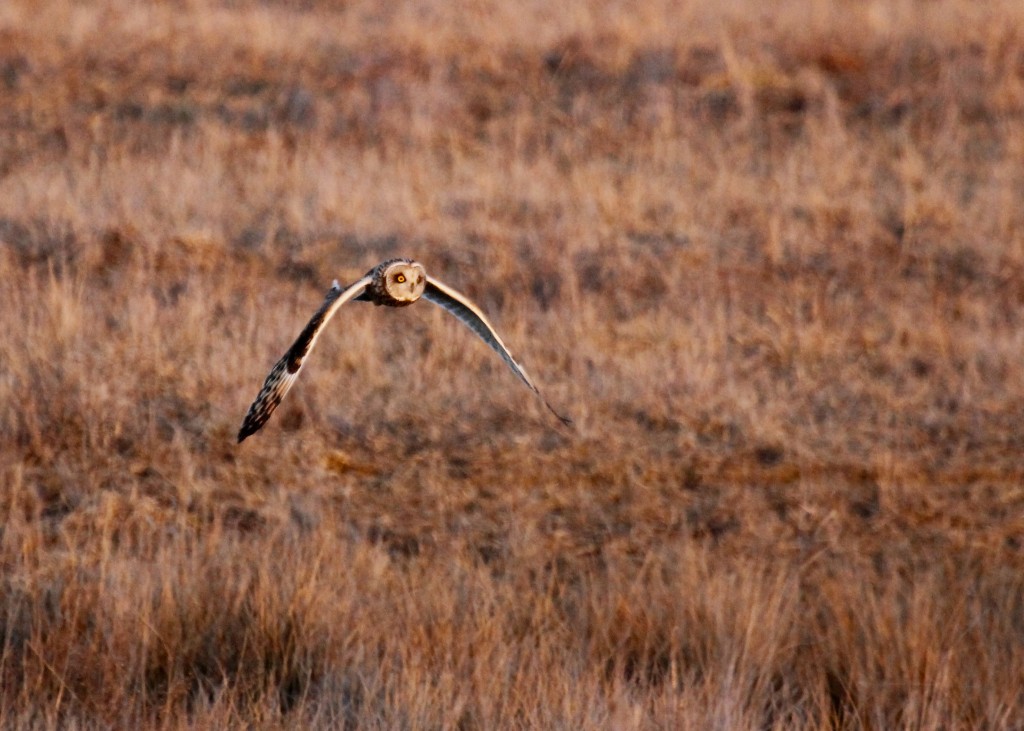 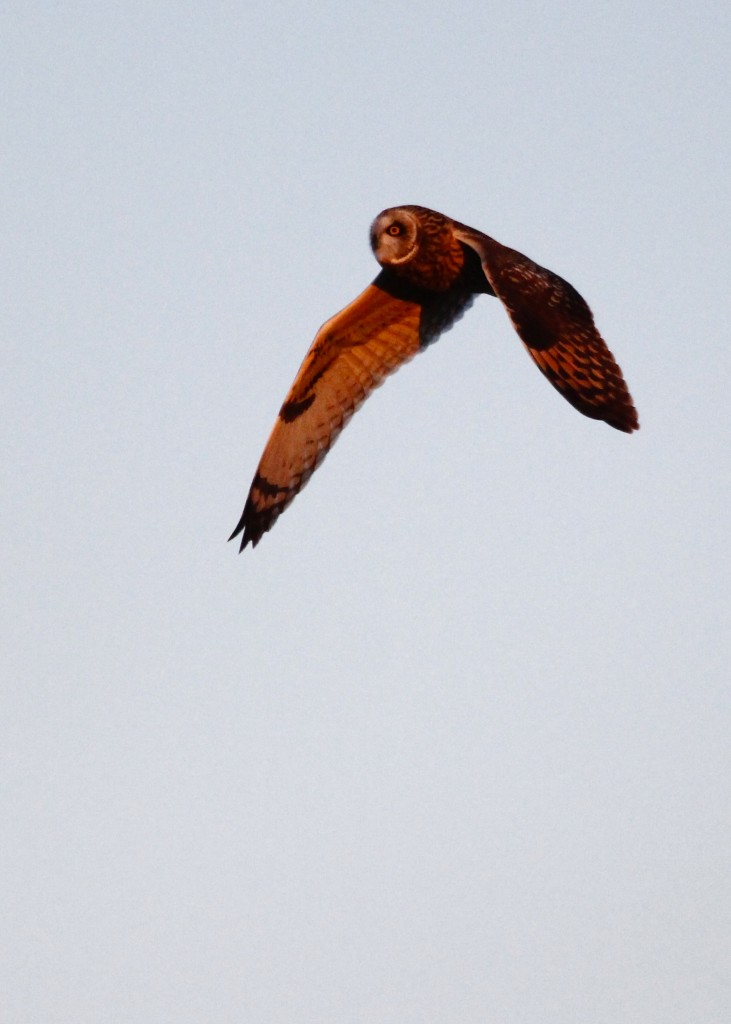 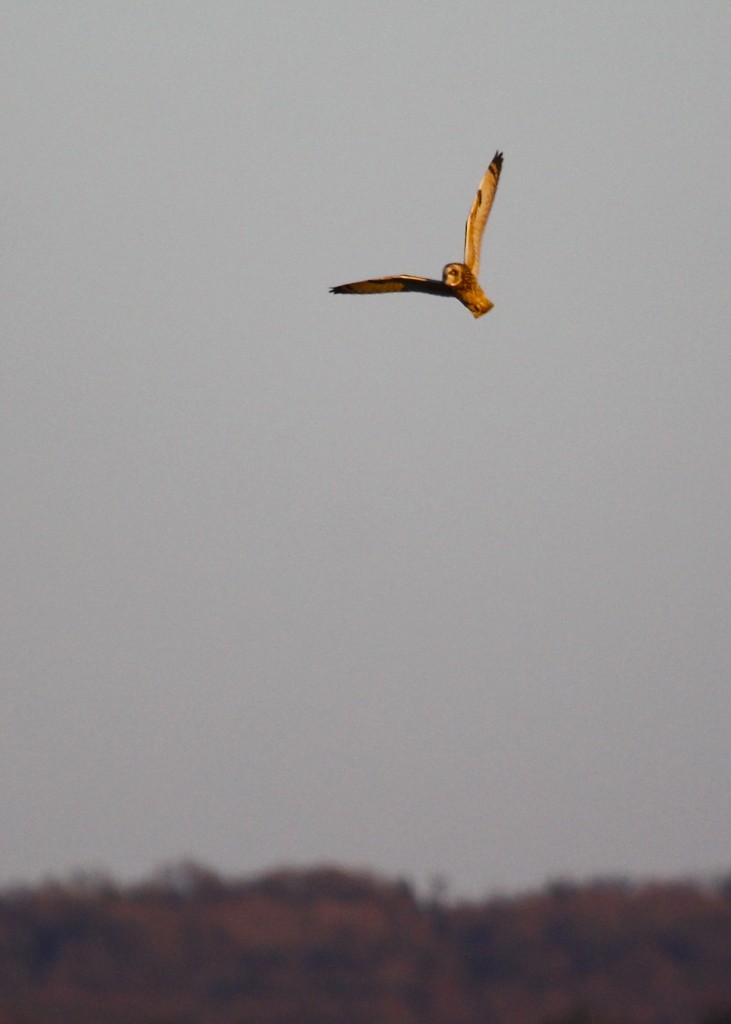