QUICK POST: Huge thanks to Bruce Nott, who contacted me earlier today to let me know he had a RED-THROATED LOON at Orange Lake. Not only that, he came back out in the evening and was present with his scope on the bird when I arrived! You can’t ask for any more than that! It was a beautiful bird, we had distant (of course), but good looks in our scopes. I tried for photos but they came out terribly; the bird was just too darn far. I was pretty excited as it was my 213th bird in Orange County this year and also a county life bird (#236). Excellent birding!

My Thanksgiving tradition of visiting Montezuma National Wildlife Refuge continued this year, in spite of the gray skies and intermittent rain. My brother-in-law, Bill and I were happy to learn that Wildlife Drive was open in spite of the recent snow fall. We had a productive day where the ducks were numerous but VERY distant. It was hard to even contemplate any sort of accurate count and I’m sure my eBird report numbers are a bit too much on the conservative side. We had 17 species of waterfowl:

The highlight of the day was, undoubtedly, locating first one and eventually three ROUGH-LEGGED HAWKS at the refuge. It was my first time getting them there, and Bill was very excited, as it was a life bird for him. All in all we had a really good day but struggled like crazy for decent photos. In case I haven’t said it enough on this blog: Go to Montezuma NWR! It’s a really great spot.

On Sunday, I hooked up with Kyle Dudgeon early in the morning and we birded southern Orange County pretty much by car, trying for photos for the most part. It was good to see Kyle and catch up (he has been away at college), and we had some decent birds for the day. Notably, we had 8 raptor species for the morning: Bald Eagle, Northern Harrier, Cooper’s Hawk, Red-tailed Hawk, Rough-legged Hawk, American Kestrel, Merlin, and Peregrine Falcon. The highlight for me was seeing a good sized flock of Snow Buntings, perhaps over 100 birds. Good Birding!

QUICK POST: There’s nothing like a quintet of LONG-TAILED DUCKS to give me a lift after a rough night of insomnia and subsequent brutal work day. These 5 beautiful birds were at Wickham Lake this evening after work and they lifted my spirits considerably. Also present were 6 Hooded Mergansers, 41 Buffleheads, and 1 Greater Scaup. Huge thanks for Rob Stone for the heads up.

QUICK POST: I spent a pleasant morning birding in the snowy conditions at Port Jervis Watershed Park and Recreational Area. I walked the trails there for over four hours; it was quite birdy at times, but with all expected species. I did not have any luck with my 2 target birds – Pine Siskins and Crossbills. My best birds for the morning were:  a Hooded Merganser (my first of the season), a Fox Sparrow, and couple of Hermit Thrushes.

I got a relatively early start and arrived at the Shawangunk Grasslands National Wildlife Refuge at 7 am. I had a couple of goals for the morning. The first was to try for some photographs; it felt like ages since I’ve gotten a decent shot. The shortened days have really limited my ability to photograph in any sort of good light, plus I just feel a little snakebite lately when it comes to photos. My second goal was to relocated the Northern Shrike that has been hanging around out there, on and off. On this past Thursday evening, I made a brief stop and viewed the refuge from the Galeville Park and was lucky enough to find the shrike and get a couple of distant, brief looks at the bird in my scope before I lost track of it.

As for my first goal, I did get some post-able photos this morning, however they are nothing to write home about. But, still it was great fun to be out on such a gorgeous morning and have some good birds in beautiful early morning light. As for the shrike, it was a no show. I spent most of my time in the area where I had seen the bird on Thursday, but I was unable to relocate it.

It was an enjoyable morning of birding, if not amazing. One bird I was hoping to see but did not was Rough-legged Hawk. It leaves something to look forward to for next time, I guess. I’ve include my species list at the bottom of this post.

Well, sadly today was my final day as official counter at Mt. Peter Hawkwatch for the 2016 season. It was a gorgeous day to be on the mountain; sunny and cold with a moderate northwest wind. Judy Cinquina joined me for most of the day, and although the conversation was more plentiful than migrating raptors, we still had a pretty good flight, with 31  birds which included a pretty good variety. Highlights for me included good looks at two adult Bald Eagles, two adult Red-shouldered Hawks, and a brief look at a bird that always seems to be on a mission – a Merlin. Photos were tough to come by, even the vultures and passerines seemed to keep their distance today.

It was another excellent season for me at Mt. Pete; I had decent flights every Saturday except the two where I was rained out. And, I feel like I continued to learn and improve my hawk watching skills. It’s sad to think it’s another 10 1/2 months until I’ll be at it again. I should mention that you still have a few days to go to the watch – official counters will continue to be there until Tuesday November 15th.

Here’s my report for the day: 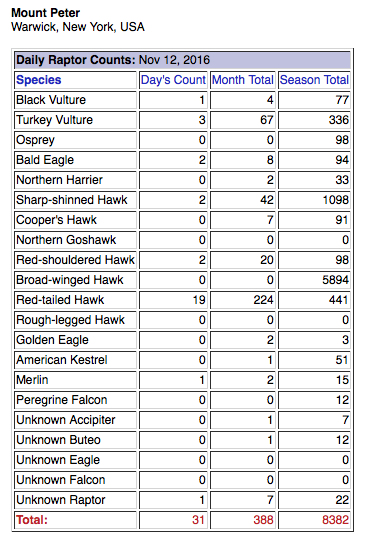 My Saturday shift counting at Mt. Peter Hawkwatch was steady but not exactly exciting. WNW winds provided me with 47 migrating raptors, consisting of mostly Red-tailed Hawks (22). Raptor highlights for me were decent looks at 3 adult Red-shouldered Hawks, and a distant look at a migrating ‘Gray Ghost’, an adult male Northern Harrier. My non-raptor highlight was 6 Common Loons – one group of four, and two singles. Photos were scarce for the day, but thankfully visitors were not. I enjoyed the company of Linda Scrima, Judy Cinquina, Maria Loukerisk, and Rob Pirie. Huge thanks to all four for their help spotting birds too.  Here’s my report for the day: 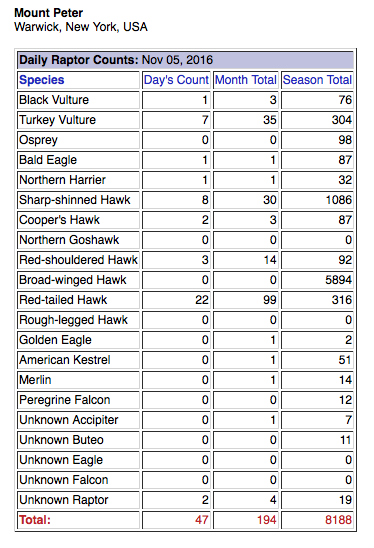 Weather:
Cloudy and cool with a WNW wind. Temperatures ranged from 5 to 13 degrees Celsius