I met Linda Scrima at the Liberty Loop this morning for a brief outing. My target bird was LINCOLN’S SPARROW, which I got relatively easily as Linda had had them out there several times earlier this week (big thanks to Linda – this is two years in a row that she helped me get my LISP). We got excellent looks at a couple of birds and photos too. Other good birds for the morning included: Merlin, Cooper’s Hawk, a trio of cooperative Palm Warblers, several Savannah Sparrows, and a Pied-billed Grebe right in front of the viewing platform. The Lincoln’s Sparrow was bird #210 for me this year in Orange County.

I can’t sugarcoat this one. It was a tough day at Mt. Peter Hawkwatch. Seven hours of scouring the bluest, haziest, cloudless sky you can imagine. Under a blazing sun. If the birds were up there, I didn’t find very many of them. I had some good help (and good company) too, but at the end of the day, we scraped and clawed for 54 migrating raptors. Rick Hansen, Kyle Dudgeon, and Rob Stone all visited for periods of time, and who knows how few birds I would have had if they hadn’t come up. They can’t all be winners, and today was not my most fun day on the mountain.

I did end the day on a very positive note. A couple, Henry and Lynne Launig came up to the watch. I immediately got a positive vibe from them. We had some nice conversation and we enjoyed seeing a relatively close young Bald Eagle that flew to the west of the platform (but didn’t migrate). Lynne brought up some feathers from her car that we tried to ID (Red-tailed Hawk?). It ends up that it was their 50th Wedding Anniversary. And they came to Mt. Peter to celebrate. I thought that was pretty cool. Their next stop was going to be the Bashakill; I hope they had a wonderful evening over there. 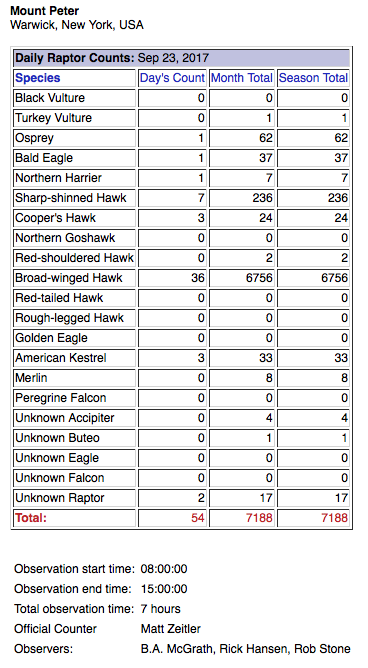 I stopped by Citgo Pond on my way home. I was pleasantly surprised to see that some new birds had moved in: 4 SEMIPALMATED PLOVERS and 5 Semipalmated Sandpipers joined the shorebirds that have been present for about a week or so. Also, the Wilson’s Snipe was nowhere to be seen.

I’ve been out checking for shorebirds as much as I can this week. For those of you who don’t know, I started a new job about a month ago. I’m really enjoying it and my stress levels are much lower, so the move has made me happy. The downside, however, is that I get out of work later in the evening, so it’s cutting into my birding time. Regardless, I’ve made it out to Citgo Pond three times this week and took a quick tour of the black dirt on another evening. Conditions at Citgo are excellent for shorebirds and I’ve had fairly decent numbers of what I would consider expected species. Tonight I had:

Earlier in the week I had a single Semipalmated Sandpiper; I did not see it tonight. And up until yesterday, the Glossy Ibis that was first reported in late August by Bill Fiero continued, but I did not see the bird tonight and I suspect it finally moved on.

Last night I took a quick spin through the black dirt. I found plenty of Killdeer and was lucky enough to stumble upon 8 American Golden-Plovers. They made my night.

I would also like to mention that John Haas has had some good shorebirds in Sullivan County this week – check out his blog here for the latest. 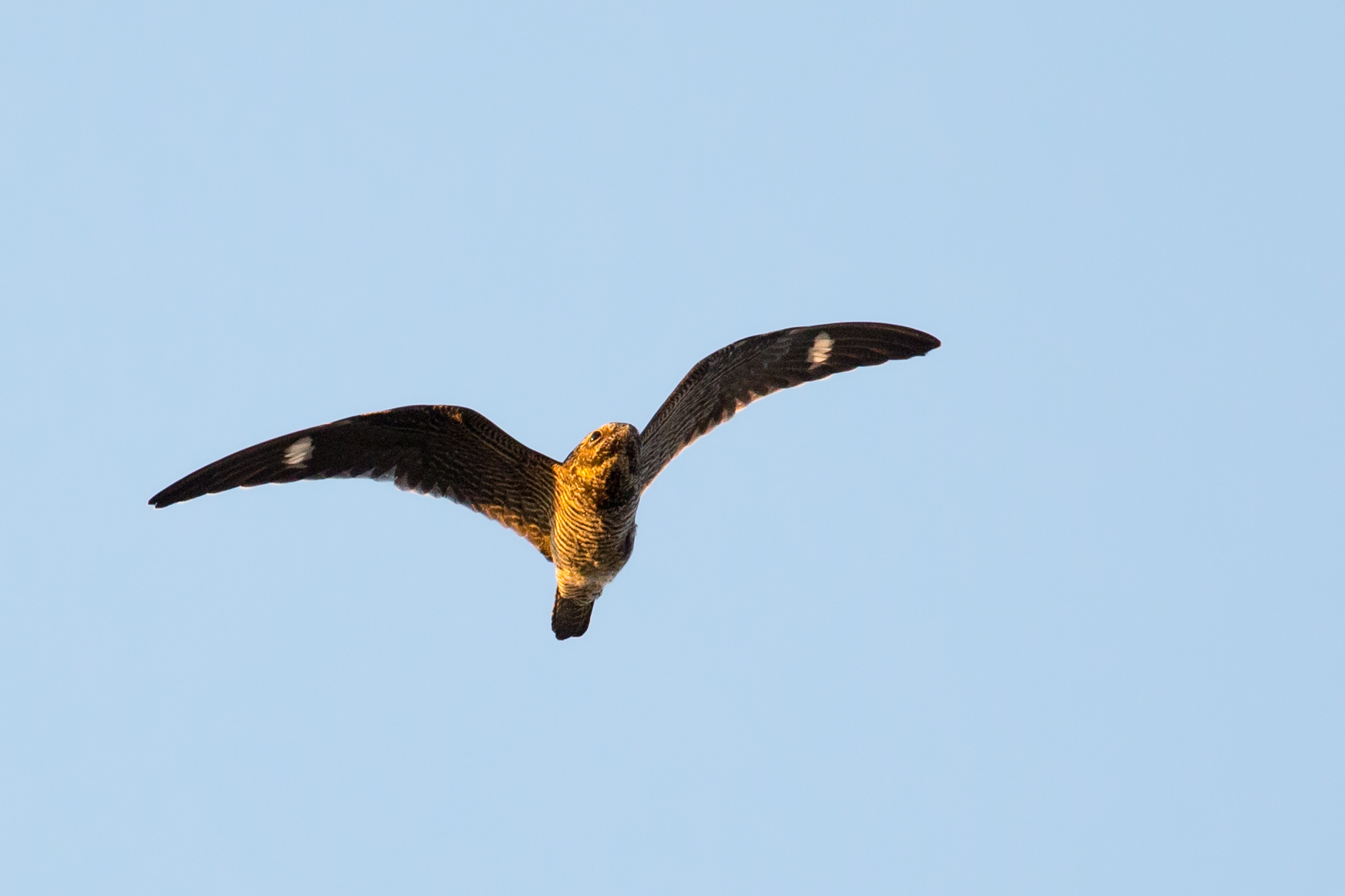 After a spring where I didn’t see any in the county, I’ve been fortunate this fall when it comes to Common Nighthawks. I’ve had nearly a dozen sitings in Orange County, including two occasions when they flew right over our house in Goshen, NY. I was on my way home on September 4th in the evening, when I noticed this bird as it, and several others, hawked insects over the small ice cream stand on the corner of Matthews Street and West Main in Goshen. I pulled over and grabbed my camera. I was pretty excited since the birds were up early and I had good light. I enjoyed trying to track the birds as they flew erratically and hunted; it was certainly a nice end to the day.

I had a great day today at Mt. Peter Hawkwatch. The birds were flying, at least to a certain extent, and I had a respectable 493 migrating raptors (448 of them were Broad-winged Hawks). I also had many visitors – it’s an exciting time of year at the hawkwatch, so there are plenty of folks coming an going: Joyce Depew, Kathy Ashman, Maria Loukeris, Linda Scrima, Rob and Anthony Stone, Denise Ferrel, Carol Linguanti, the Zahns, and Phil and Ann (who’s last name I don’t know but they are avid hawk watchers and yearly visitors to Mt. Pete) all spent time on the mountain today, scouring the skies for hawks. Here’s my report for the day: 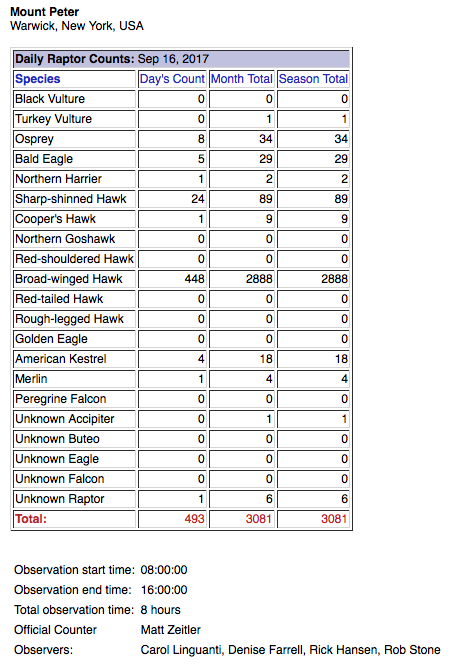 SUPER QUICK POST: I had loads to do tonight to get ready for my Vermont golf trip, but made it out to the black dirt this evening because conditions seemed ripe for good shorebirds. I was happily surprised beyond what I would have hoped for. On Skinners Lane, I located a really great collection of shorebirds, all in a single field: 12 Black-bellied Plover, 43 American Golden-Plover, 10 Killdeer, 1 Greater Yellowlegs, 4 Lesser Yellowlegs and definitely the best bird of the day, 5 SANDERLINGS.

I put the word out and Linda Scrima and Rob Stone both joined me to enjoy the birds. Excellent OC birding! 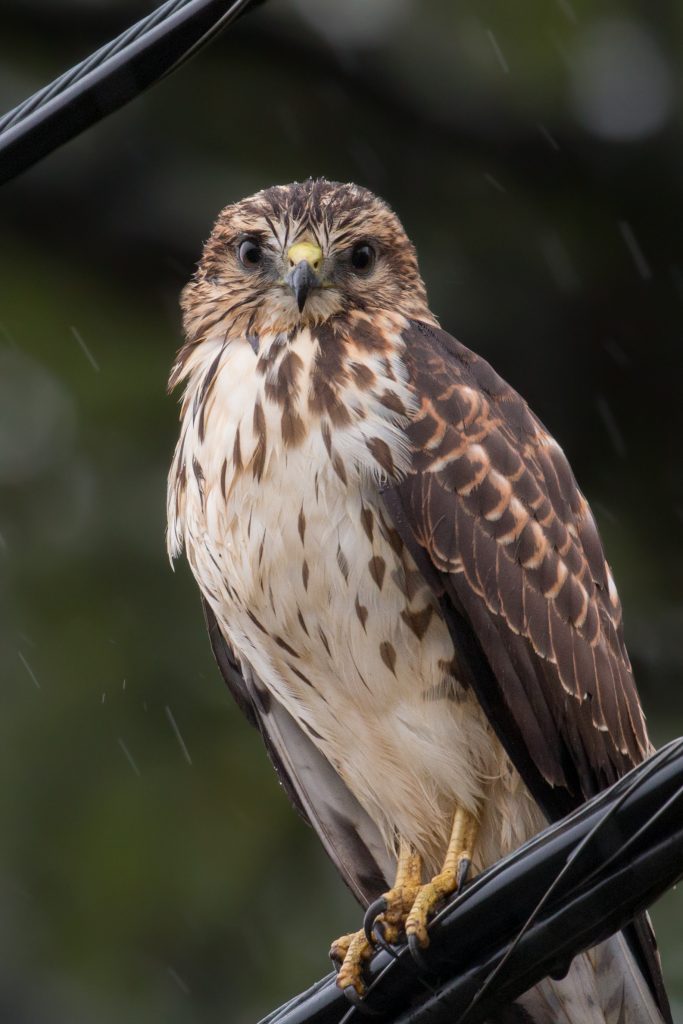 09/03/17: After an early morning searching unsuccessfully for shorebirds in the Black Dirt, I came across this Broad-winged Hawk on a wire near 6 1/2 Road Sanctuary. My impression is that this was a very small hawk, in fact, likely the smallest buteo I’ve ever seen; to my eye it appeared to be just a little larger than a Merlin. I’m thinking that this is a small, young, male BWHA. I’m not a fan of wires as a perch for photos, but I do like this one just because it gives a really good look at the hawk.

Time flies. It’s hard for me to believe the summer is over and hawkwatch is upon us already. I am excited for the season; hawk watching is one of my favorite types of birding, and, with the exception of next week (9/9), I will be the official counter at Mount Peter Hawkwatch every Saturday for the duration of season.

I got off to a decent start to the season today with 17 migrating raptors counted, which isn’t horrible for September 2nd. I had 11 Broad-winged Hawks, 5 Sharp-shinned Hawks, and a single Osprey. Five of the Broad-winged Hawks came over in a “mini-kettle” that formed to the right of the tower in front of the viewing platform. The birds climbed quite quickly and then streamed off, migrating to the southwest. I was joined by Bill Connolly and Rob Stone – not coincidentally, I had my most productive hour (8 birds) when they were both present.

Here’s my report from the day: 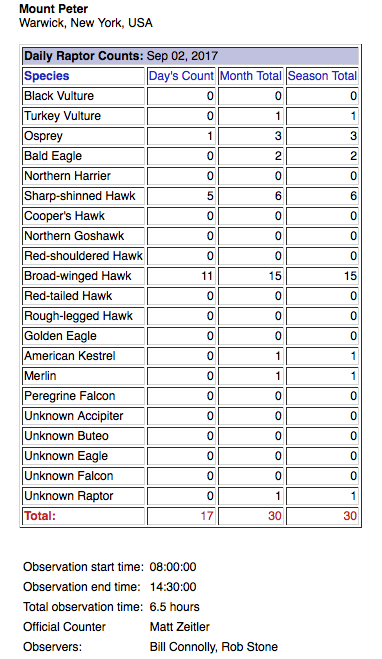