My day of counting hawks at Mount Peter Hawkwatch definitely exceeded my expectations. With gentle southwest winds in the forecast, I was thinking it would be a long day with very few birds. Instead, it was a pretty good day with a total of 52 migrating raptors, which put the total number to over 13,000! It was a gorgeous day, sunny and cool with just enough clouds to help find birds in the sky. Huge thanks to the hawkwatch’s fearless leader, Judy Cinquina, for the company and the help on the mountain today. Here’s my report: 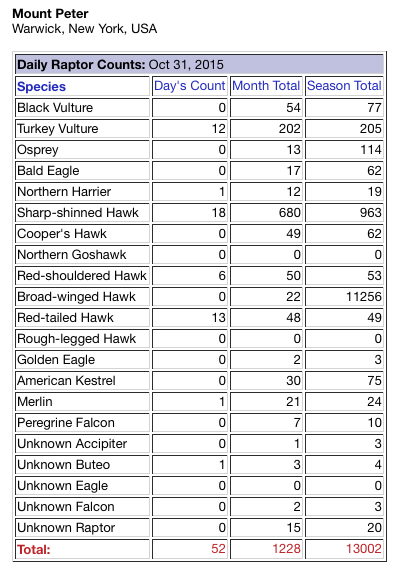 Weather:
Sunny and cool with some clouds. Temperatures ranged from 2 to 15 degrees Celsius; there was a light wind primarily from the southwest all day.

I had an unproductive morning of birding today; I was hoping that perhaps some waterfowl had moved into the area. The I checked Glenmere Lake and Wickham Lake and only found a pair of Ruddy Ducks at Wickham and a single Greater Scaup at Glenmere. I went home disappointed and then headed back out in the afternoon, unsure where to go. I decided to check 6 1/2 Station Road Sanctuary – Citgo Pond for shorebirds, and I’m so glad I did. Upon my arrival to the pond, I immediately located a DUNLIN and what I thought were three Pectoral Sandpipers. I put the word out and took many photos, particularly of the Dunlin. Two of the “Pectorals” were not sitting right with me, but I couldn’t think what else they might be.

UPDATE 10/29/15: After receiving a couple of comments on this post questioning the identification of the two birds below, it was time to take another look and try to get it right. Both commenters believe that the birds are White-rumped Sandpipers rather than Red Knots. So last night I put my photos on the New York Birders Facebook page, where I only got one response, which also identified the birds as immature WRSAs (but importantly no comments disagreeing with this). I initially considered WRSA for these birds, but ruled them out based on size, so I was confused. I turned to The Shorebird Guide by Michael O’Brien, Richard Crossley, and Kevin Karlson. The last two pages of the book contain silhouettes which depict the relative sizes of shorebirds. Looking at the silhouettes, it became clear that I should have actually ruled out Red Knots, based on their size rather than the opposite. It’s, of course, no fun to be wrong, but I believe that White-rumped Sandpiper is an accurate ID, so I’m happy to hopefully get it right. Thanks to Rosemarie and Christopher for their comments which got this started.

Sharpies and sharp eyes were the story today at Mount Peter Hawkwatch. I counted 41 migrating Sharp-shinned hawks, but I don’t know how many of them I would have missed without a little help. Many of the birds today were passing by to the east of the viewing platform. For those who have never been to Mount Pete, the view on that side is obstructed by a number of trees, so it can be difficult to pick up the birds as they pass through the smaller windows between the groups of trees. Kyle Dudgeon spent most of the day at the watch with me, and this guy can find and see hawks naked-eye better than I can with binoculars. Oh to have young eyes! Then, in the afternoon, Ryan MacLean, official counter at Quaker Ridge Hawkwatch joined me, finding several birds during the hour or so he was there. By the end of the day, I had totaled 62 migrating raptors – a pretty good day! Here’s my report: 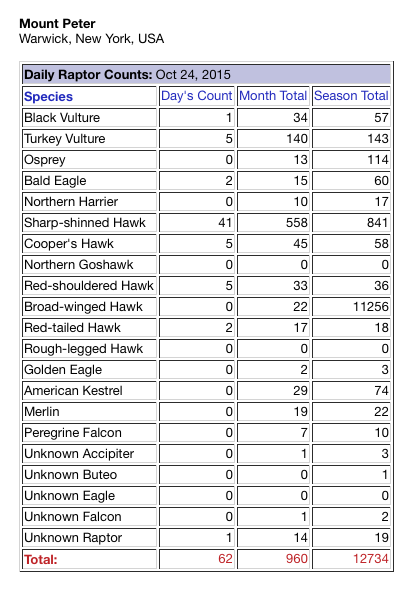 Weather:
Cloudy and cool with temperatures starting at 3 degrees Celsius and rising to 11 degrees. There was a northeast wind for most of the day, which shifted to southwest in the afternoon. 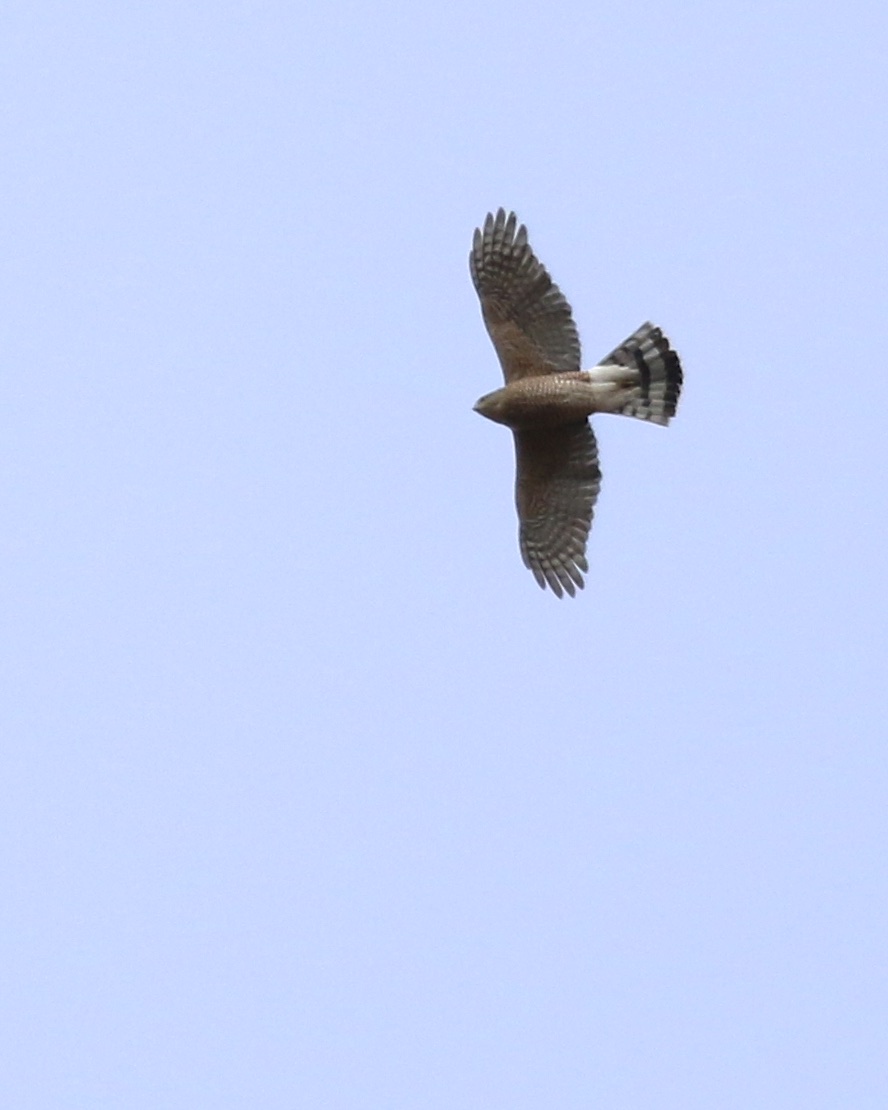 As I left Mount Peter Hawkwatch this evening after work, I received a call from Rob Stone. He had several VESPER SPARROWS in the area near Wickham Woodlands Town Park earlier in the day. I was heading to the park already, so I went to check it out. After a little bit of searching, and just before the sun got too low for photos, I located one and then two Vesper Sparrows, skulking in the grass. The bold eyering was seen very easily, even without binoculars. In my photos, other identifying features can also be seen: white outer tail feathers on a fairly short tail, large bill, and pale-centered dark ear coverts. I mistakenly thought that this was a life bird, but when I got home I entered the observation into eBird and I saw that I had one when I was in Colorado back in 2013!  I can barely remember that bird and I was unable to get photos, so today was much more fulfilling since I got such good looks and photographs too. Plus, it is nice to be able to add the bird to my Orange County year list and life list. Huge thanks to Rob Stone for the heads up!

QUICK POST: Here are a few shots from this morning when I walked Liberty Lane and part of Winding Waters Trail at the Walllkill River National Wildlife Refuge. It was an unremarkable morning bird-wise. There were enough birds around to keep me entertained (mostly sparrows, of which I had 5 species: Song, White-throated, White-crowned, Swamp, and Field), but I mostly just enjoyed a walk in the cool crisp weather. 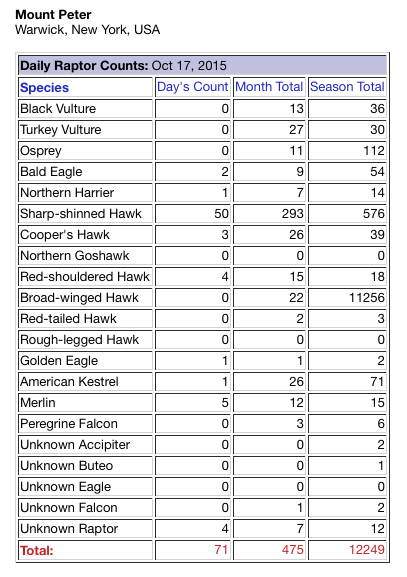 QUICK POST: I birded Wickham Woodlands Town Park once again this morning, and it was quite birdy. I walked for over two hours and had 37 species for the morning. I had all six of the expected woodpeckers for our area; I was especially happy to see and get a shot of a Yellow-bellied Sapsucker. Sparrows were not numerous, but I did get 2 White-crowned, 4 White-throated, and 1 Lincoln’s Sparrow. Other highlights included more Yellow-rumped Warblers than I could possibly count, a single Palm Warbler, a Black-throated Blue Warbler, and both kinglets. The Golden-crowned Kinglet was the first I’ve had this year, making it my 190th Orange County bird for the year, which is four more than I had all of last year.

I had a pretty good day today at Mount Peter, at least compared to how dead it has been up there for the last week or so (the weather just hasn’t been cooperating!). I had 46 migrating raptors, which was just enough to keep it interesting throughout the day. Raptor highlights included an immature Bald Eagle that flew over the valley heading southwest in the third hour of the watch, and the final bird of the day was an adult Peregrine Falcon that passed, very high, directly over the viewing platform. Sharp-shinned Hawks led the day with 28 being counted.

One of the many things that I like about counting at the hawkwatch is that it is 8 hours of straight birding. You never know what you might get during that time. Right upon my arrival and pretty much throughout the day, I had a pair of Black-throated Green Warblers not very far from the platform. I also had several Yellow-rumped Warblers and a couple of Ruby-crowned Kinglets at different times, and Canada Geese were moving big time; I counted over 1,300 for the day. Here’s my report: 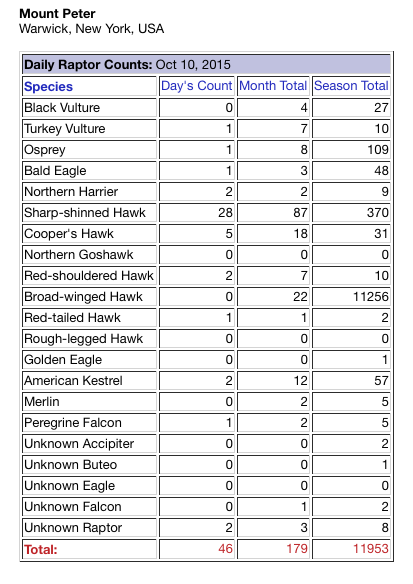 Weather:
Sunny with some clouds in the morning, then sunny and clear. Temperatures ranged from 11 to 17 degrees Celsius. 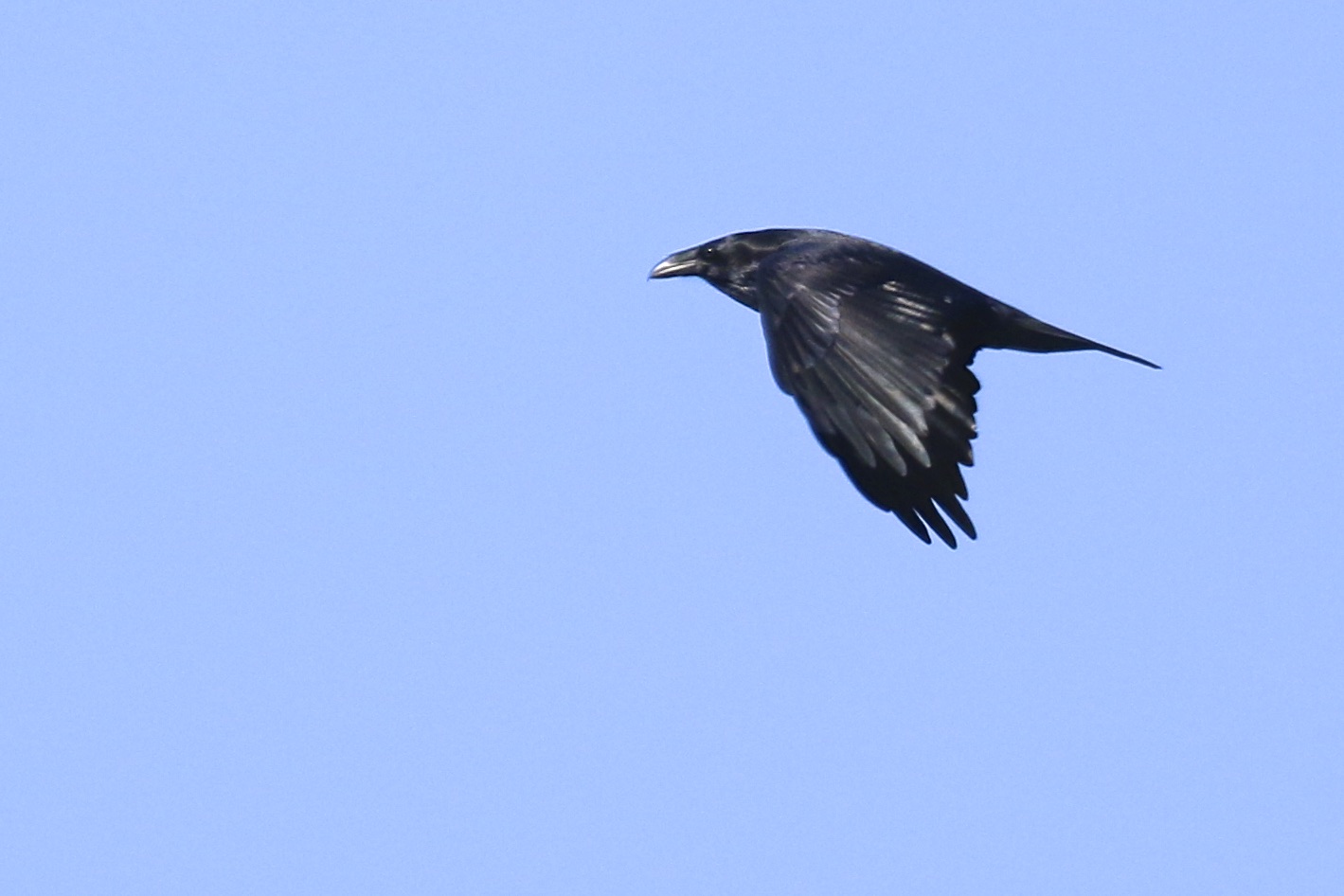 I was happy to finally get out to bird Warwick’s newest town park, Wickham Woodlands. For me, the best thing about the park is that it offers a good look at nearly all of Wickham Lake. My highlight was seeing 11 Ruddy Ducks that were present on the lake, my first of the season.  Scanning the lake, I also had many Mallards, Canada Geese, a dozen Ring-billed Gulls, 2 Belted Kingfishers, a Double-crested Cormorant, and an adult Bald Eagle. But as I wandered through the 50 acres that make up the park, I realized that it was quite birdy. I had easily over 20 Yellow-rumped Warblers, 4 Ruby-crowned Kinglets, several Eastern Bluebirds, and I got a nice look at a Pileated Woodpecker as it flew across the lake. Nice night of birding!

If it wasn’t for Kyle Dudgeon’s persistence, we would have missed a lot of good birds. We met up at 7:30 am and arrived around 8:15, just in time to catch one of the local Peregrine Falcons enjoying a meal at “the perch”. We had many good birds early on, including several Bald Eagles, but the lighting was pretty bad; all the early photos in this post have a stark white background. I haven’t shot hawks in flight for an extended period of time like this in a while and I definitely felt rusty. I was having a hard time keeping up with the birds (and camera settings!), particularly the Peregrines which move so fast it’s incredible. I managed to get some good shots, but really I felt like I could have done better; that many opportunities had slipped by. I guess that will motivate me for the next outing.

We were joined by Jill Homcy and then a little later on by Maria Loukeris. We all enjoyed a good mix of local raptors (Peregrine Falcons, Bald Eagles, Red-tailed Hawks, and Osprey) and migrating raptors which were lead by Osprey (35), followed by a tie between two accipiters Sharp-shinned Hawks (28) and Cooper’s Hawks (28).  I felt like they must have been having a pretty good day for migration, I checked when I got home and according the Hawkcount.org, the total count for the day at State Line Lookout was 121 migrating raptors. It was a really enjoyable day for me, with good company and plenty of super birds to photograph.