Kyle Dudgeon and I loaded the kayaks onto my VW Golf this past weekend and headed north to do some Adirondack birding. We were heading to Saranac Lake, where there are some excellent local birding hotspots and the St. Regis Canoe Area is less than a half hour away. This trip has become an annual one for me; I’ve gone the past four years in a row now, but for Kyle, this was his first birding trip in the Adirondacks. Our main goal was to photograph the Common Loons, and if that went well and the timing worked out, we would do some additional birding in the area.

We arrived at the boat launch late Saturday afternoon. The weather seemed good while we were on the road, with mostly sunny skies above us as we made the 4 1/2 hour drive. But, when we got out of the car it was really windy and we immediately saw that the water was extremely rough. As we debated on whether or not to venture into the water, an adult Bald Eagle swooped in by the boat launch and then perched on the other side of the small cove. That convinced us and we headed out in the kayaks. Once in the water, the eagle did not stick around for any photos and the water was rough enough for me to be concerned. I wasn’t worried for our safety, we had life vests and we are both strong swimmers, but between the two of us, we had a lot of camera gear to keep dry.

We eventually made it to some areas that were protected from the wind, making the waves at least tolerable. Unfortunately, we were not having much luck with loons, getting only a brief look at a single bird. I’ve been successful on every other trip, but here I was with Kyle and I was beginning to get worried. We paddled around the large pond, hoping our luck would change and eventually it did. We first heard a loon calling, and then four loons flew in and put down just across the pond from us. We made our way over to them and, as I’ve experienced in the past, the birds were comfortable with our presence and went about their business. The loons had put down in an area where the water was pretty rough, which made it really tough to take photos, but in the end I felt like the water movement really added to the photos. Later, as we paddled back to the launch, Kyle and I decided to definitely give it another try first thing in the morning, hoping that the wind would die down a bit and make for some easier paddling.

We arrived at the boat launch right at sunrise on Sunday morning. And the water was like glass. What a difference a day makes! The light was gorgeous and the paddling was super easy. We spent 2 1/2 hours on the water; we did well with more Common Loons, including finding one that was on a nest. We were also hearing many songbirds along the shores of the pond and the islands in the pond. We had an excellent close encounter with a Blackburnian Warbler, but I somehow blew my photos of that bird. Kyle did better than I did, you can check it out, as well as all his photos from the trip here. The highlight of the morning, however, was an adult female Common Merganser with 8 of the cutest chicks you’ve ever seen!

It was still early when we finished up kayaking, so we hit a couple of hotspots to try and get Kyle some target birds. We were hoping for Boreal Chickadee, Gray Jay, and Black-backed Woodpecker. We made brief stops at both Bloomindale Bog and Bigelow Road. Both areas were birdy, but the birds were mostly heard and not seen. We had our best luck at Bigelow Road, where right near the trailhead we had a great look at a Nashville Warbler. Further on, we eventually heard a pair of Black-backed Woodpeckers, which were frustratingly close to the trail, considering we never got even a glimpse. Then, on our way back to the car, we first heard and then saw a single young Gray Jay. The bird did not cooperate, so no photos. We wrapped up the weekend with a nice big, late, breakfast before getting on the road. It was another great trip to the Adirondacks, a place that I’ve grown to really love in recent years. Huge thanks to Kyle for joining me; he was great company.

QUICK TEASER: Kyle Dudgeon and I took a trip up north this weekend for some awesome Adirondack birding. We took loads of photos (especially of Common Loons), so it may take me a little time to get through them. Stay tuned for a post in the next few days.

Since my shift at the Bashakill Area Association’s Nature Watch didn’t start until 10, I decided to kayak the Bash beforehand. Nature Watch is a great program that I have participated in for years now – basically, trained volunteers such as myself set up viewing scopes at the main boat launch to help educate visitors about the nesting Bald Eagles and Osprey at the Bashakill. Click here to read more about it.

It was a gray, slightly foggy morning at the Bash. I paddled from 6:30 t0 9:30 and it was quite birdy, mostly with the usuals. My main target was LEAST BITTERN, which I heard very well, but never did get to see. The bird was calling in the vegetation just feet from my kayak, but was too well hidden, which was simultaneously exciting and frustrating. Also exciting was a BARRED OWL, which called several times in the distance, and an ACADIAN FLYCATCHER with its excellent call of “peet-sah!”. Photo ops were few and far between for some reason, and the poor lighting meant I had the ISO cranked up so I wasn’t really happy with most of what I took. An adult Bald Eagle did fly in and perch nearby, allowing for a halfway decent shot (see above).

I joined Karen Miller and Lara Sheikh as volunteers for Nature Watch, which was slower than usual as far as visitors go, but pretty exciting as far as the birding. A GREAT EGRET, was first seen by a visitor and then we got our scopes on it. A pair of Yellow-bellied Sapsuckers came and went from the main boat launch the entire time; apparently feeding on the willow tree they were visiting. The two young eaglets were on and around the nest, flapping like mad to get ready to fledge. Karen located a Yellow-throated Vireo that provided great looks. Towards the end of our shift we had a Broad-winged Hawk calling from the woods up near the road. Eventually the hawk flew out of the woods with some sort of large prey in its grasp. After the shift was over, on my way out, I relocated the BWHA and managed to get a photo. Overall it was a good morning of birding for me with plenty of good birds to keep it interesting. I had 50 species of bird in the 6 1/2 hours I spent at the Bash.

ALSO: While I was at the Bash, I was notified by Rob Stone that he had a DICKCISSEL in the black dirt, so I ran for that bird in the afternoon. I managed only a brief, distant look, but what a great bird for OC! Huge thanks to Rob, as usual. Documentary photo below.

QUICK POST: These days it looks like I’m doing better with mammals than with birds. I did some local birding after work today with Acadian Flycatcher as my target bird. I was able to get the flycatcher (heard first and then seen, but no photos), which made me happy, but it was a Black Bear that stole the show. It was very dark on the trail, so I was happy with how my photos came out since they were taken with an ISO of 10,000. On my way out I also came across some Wild Turkeys with some super cute chicks. I birded for just over an hour and I had 27 species.

My birding time was a little bit limited this weekend, but I did manage to do some early morning birding today at the Bashakill Wildlife Management Area. I had plans to meet up at the Bash with Linda Louise to do water-testing a little later in the morning, so I got up early to fit some birding in before that. I stopped at Haven Road, I walked the Birch Trail briefly, and I spent most of my time at the Nature Trail. The Bash was birdy with plenty of the usuals but nothing unexpected. Highlights for me included getting excellent binocular looks at a Common Gallinule from the Birch Trail and also of a rather bedraggled looking Broad-winged Hawk that flew over while Linda and I were water-testing at the fishing dock at the southern end of the Bash. In the end, between birding and water-testing, I had a total of 44 species. 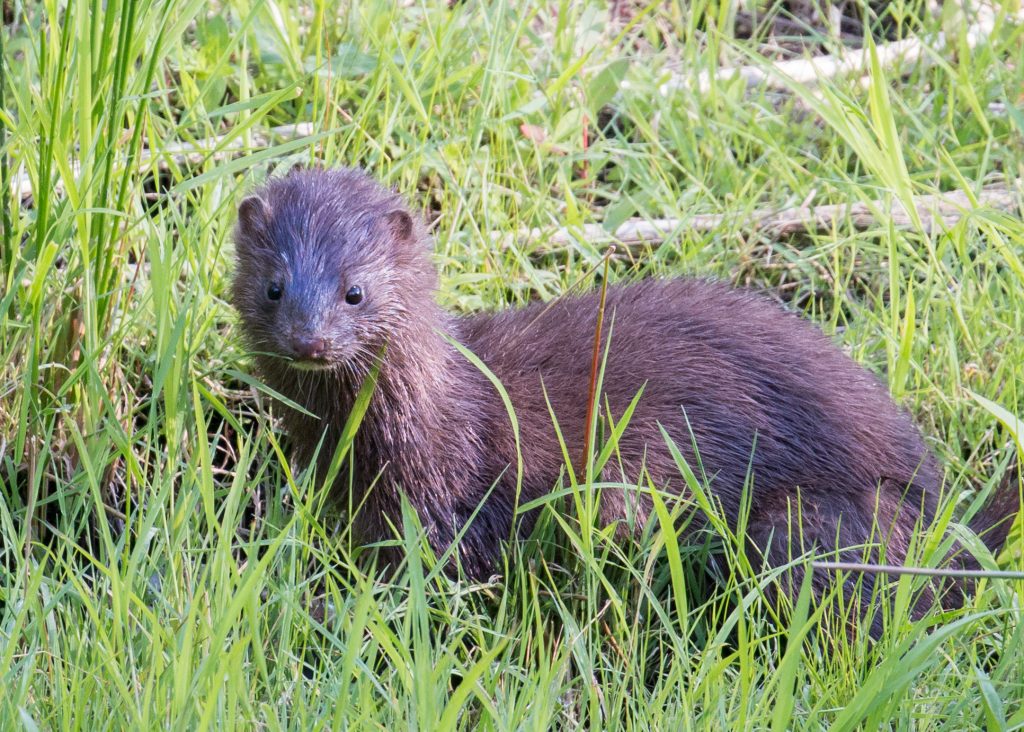 Every once in a while, my best bird isn’t a bird at all. I spent the afternoon after work today birding at Goosepond South, a spot that I’ve never been to before. Towards the end of an uneventful and not overly birdy hike, I came upon this mink and it made my day. I’ve never really caught more than a glimpse of a mink, but in this case I was sitting still for quite some time and the mink did not appear to know I was there and appeared on the far shore of the stream. It then actually swam closer to me before disappearing into the grasses on the near side of the stream’s edge.