After running for a trio of Little Blue Herons that were reported at Riverfront Park in Montgomery and coming up empty, I spent a good portion of the day searching for shorebirds in southern Orange County. I stopped at Turtle Bay Road on my way to Wallkill River NWR and, although conditions looked good with muddy puddles present, I only had Killdeer there. At Wallkill River NWR, the pool in front of the viewing platform at the Liberty Loop had water levels that seemed to high for shorebirds and I did not locate any. I walked out Liberty Lane and in spite of the high water levels there, I had one Killdeer, (3) Solitary Sandpipers, and (2) Lesser Yellowlegs. On my way back, I had a single Least Sandpiper foraging on the puddles on Liberty Lane, which allowed for a good photo op. A walk to the west side of the loop did not result in much – I had another Solitary Sandpiper and Least Sandpiper, a couple of Great Blue Herons, and only a single Great Egret.

I made my way back to Goshen, checking some areas of the black dirt, where conditions were good with plenty of puddles. I had many Killdeer on Skinner Lane. The Old Warren Sod Farm was the most productive spot; aside from many Killdeer, I also had one Solitary Sandpiper, one Semipalmated Sandpiper, and my most exciting bird of the day, a Semipalmated Plover. Unfortunately all of these birds were too far out for photos.

The rain started to fall pretty heavily, so I headed home and took a break. I waited for the rain to subside (it never really did!) before heading back out to the Citgo Pond in the evening. I was curious to see how the water levels would be there, normally they would be very high with all the recent rain, but a during quick check on Friday afternoon I saw that the water level was lower than I’ve ever seen it (by the way I had several LEYE and KILL, many LESA, and two likely SESA on Friday). Well, when I got out there, not only was the water level high at the pond, the trail itself was flooded as well. Needless to say, I had no additional shorebirds there. With all the rain that is falling, the black dirt looks to be the best spot in OC for shorebirds for the next few days at least.

Maria Loukeris and I got an early start and headed south to Richard W. DeKorte Park in Lyndhurst, New Jersey; we were trying for the Ruff that had been reported there. We were not the only ones with that idea, as the park was absolutely loaded with birders. We met up with Marianne O., as planned, met some other birders for the first time, and also ran into Denise Farrel, who is also a hawk counter at Mount Peter Hawkwatch. Ultimately, we left and the Ruff had not been relocated. Meanwhile, we had some great birds at the park, including several LEAST BITTERNS. I was hoping when I finally got my lifer LEBI, it would not be a speck in a scope, or a fleeting glimpse of a bird, and I was not disappointed. The first one we had was only 50 feet away or so. It was in the shadows and partially hidden by phragmites reeds, but it looked absolutely incredible in the scope, and we worked hard to get some decent photos (I was not at all optimistic about these shots, so I was pleasantly surprised when I got home and saw them on the computer).

DeKorte is absolutely loaded with shorebirds. There were too many Least and Semipalmated Sandpipers to count, the same goes for Lesser Yellowlegs and Short-billed Dowitchers. We also had a handful of Semipalmated Plovers and also several Greater Yellowlegs. A Peregrine Falcon came through a couple of times and lifted up all the shorebirds (I somehow missed it both times!?). Also of note was a Sora that was seen well by Marianne and others but would not re-emerge when Maria and I made our way back to where it was being seen.

I had always been intimidated to go to DeKorte; mostly because of the driving and traffic, but also because I didn’t know the lay of the land. I admit that we did get a little bit lost on the way in, but really the driving wasn’t a problem at all especially since it was early on a Sunday with little traffic. And the park is very inviting, you don’t really have to know anything going into it; just arrive an enjoy some good birding.

This morning I hiked a section of the Long Path Trail off of Mountain Road, just north of Greenville, NY. According to the New York New Jersey Trail Conference website, the Long Path extends 358 miles from the 175th Street Subway Station in New York City to John Boyd Thacher State Park near Albany in New York, connecting many of New York’s parks, preserves, and state forest lands. I looked at the overview map of the trail and saw that the Heritage Trail at 6 1/2 Station Road is part of the Long Path as well. I’ve really been enjoying combining birding with hiking this spring and summer, and it’s pretty cool to know that you can walk trails from NYC all the way to the Adirondacks.

As far as the birding went, my hike was relatively unremarkable. I had 28 species for the walk and all were expected birds. Eastern Towhees were probably the most numerous, followed by Red-eyed Vireos and then Eastern Wood-Pewees. I did have some interesting experiences, including a black bear that I saw about 5o yards off the trail; the bear high-tailed it once it became aware of my presence.

I also had a Wood Duck at one of the ponds, and I witnessed a behavior I’ve never seen from a Wood Duck before. The bird was perched on a rock in the middle of the pond. I walked down the trail and took some photos from the shore and then made my way back up the trail, satisfied that I had not disturbed the bird. About twenty paces up the trail I looked over my shoulder and the duck was getting into the water – instead of floating/swimming like normal, the bird nearly completely submerged itself, leaving just its head and a little bit of its butt showing and swam that way into the grasses along the shore where it stayed hidden.

My final bird of the day, after walking for over three hours, was a Prairie Warbler right near where my car was parked (it’s amazing how often that happens!).

Notes: Linda Scrima had a Little Blue Heron in front of the viewing platform at the Liberty Marsh on Friday afternoon (7/15/16). Unfortunately, the bird flew before I arrived later that afternoon. I have been on the lookout for shorebirds, mostly checking Liberty Marsh and the Citgo Pond. Both locations have Least Sandpipers and Killdeer, and earlier in the week I also had a single Lesser Yellowlegs at the Citgo Pond.

Sometimes things just seem to work out. I had a work appointment in Wilmington Delaware this morning, and Merrill Creek Reservoir in Warren County, New Jersey, where a BROWN BOOBY has been recently reported, is not very far off the route that I took home. With some directions from Linda Scrima and a little luck, I found the location easily enough, and the bird was still present and was immediately pointed out to me by the other birders present. It spent most of its time perched and partially hidden on the I/O Tower, but in time I was there it did take flight a couple of times, which allowed for some halfway decent photos. I really enjoyed this bird and with its beautiful long thin wings it was exciting to see it in flight.  Plus, it’s a booby in the middle of New Jersey, that’s pretty amazing! And finally, it was  life bird for me, my 367th. 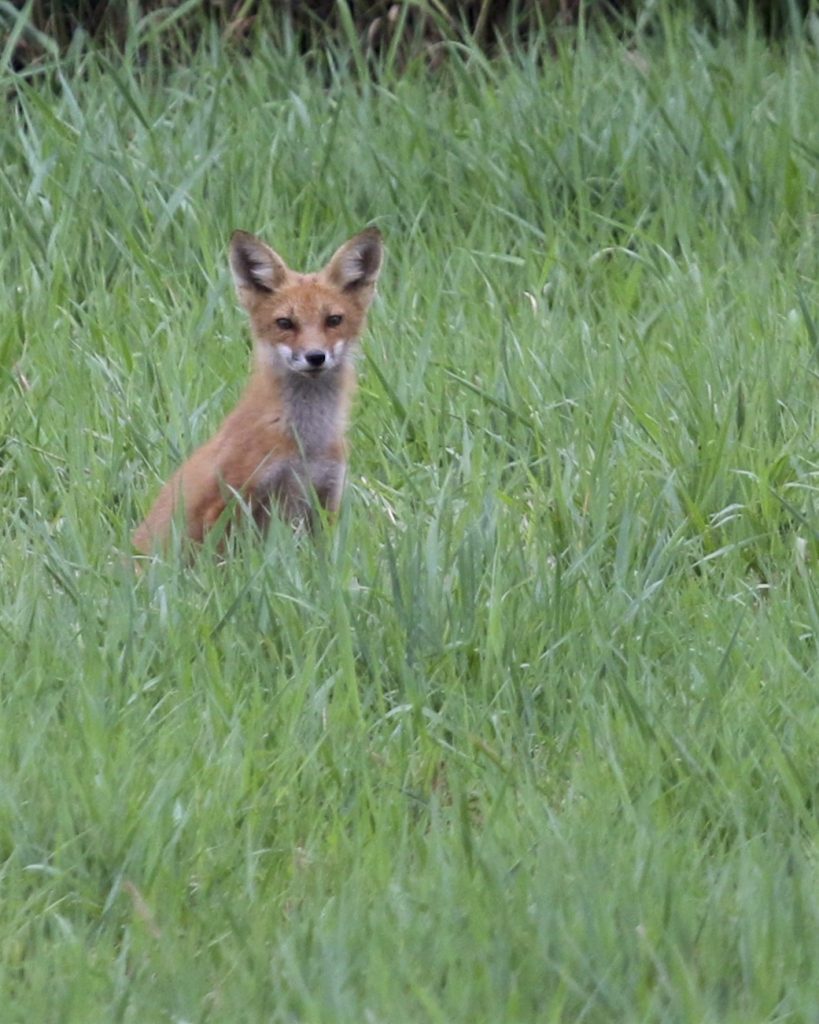 At the conclusion of a fun but relatively unremarkable morning of birding, I was lucky enough to spot this little beauty in a field on the side of the road. The fox was looking for a good place to take a nap. As I watched from a distance, the fox settled in, and when I left all that could be seen was the tips of its ears through the long grasses.

I met Linda Scrima out at the Wallkill River National Wildlife Refuge’s viewing platform; we were going to try for the Short-billed Dowitcher that Ken McDermott had located yesterday and Karen Miller had relocated earlier today. Shortly after arriving, Linda located a single bird straight out from the platform but just emerging from the grasses. Sure enough it was a Short-billed Dowitcher! The bird was distant, but we had decent looks in the scope. I went back to my car for a bottle of water when Linda located a second bird – we got on it with the scope and it was a second SBDO. We put the word out, but by the time Maria Loukeris joined us, the birds had disappeared behind the grasses. John Haas and Mark Spina came shortly after and still there was no sign of the birds. We changed our vantage point by walking 5o or so yards down the Liberty Loop Trail heading east, and that did the trick – the birds were back in view and were joined by a third SBDO. Everyone got good scope views and did their best to get photos. Since the birds were so distant, I ended up mostly shooting video with my phone through the scope, but took some photos too. Good birds and good birding!

This morning, I joined forces with John Haas and we birded the Bashakill Wildlife Management Area by kayak. We had a very enjoyable paddle with a decent number of birds (32 species), but we had no luck finding our target bird, the Least Bittern. I’m not sure at what point a bird becomes a nemesis bird, but I am certainly starting to think Least Bittern is officially a nemesis bird for me.

In spite of dipping on the LEBI, it was a fun morning of birding. It is awesome to bird with John, he is really great company and an absolute wealth of birding knowledge; every time I bird with him, I learn so much. Plus we did alright with some of the more expected birds: Eastern Kingbirds were numerous and seemed to be at every bend in the channel, we heard at least 10 Common Gallinules, saw 2 Belted Kingfishers, and we got really great looks at one adult and two young Bald Eagles.

In the afternoon, I received a call from Ken McDermott; he had a SHORT-BILLED DOWITCHER at the viewing platform at Wallkill River National Wildlife Refuge. I jumped into the car and made my way out there, but unfortunately the bird had flown north shortly before my arrival. Ken also had a Lesser Yellowlegs a little earlier, which had also moved on. So, I joined Ken and Maria Loukeris (who had also run for and missed the SBDO) for a while and we had an interesting afternoon/evening of birding. Shorebird highlights included Spotted Sandpiper (2), Solitary Sandpiper (2), Least Sandpiper (4), and many Killdeer, including 4 chicks. Other than shorebirds, we had many Great Blue Herons, several Green Herons, Cedar Waxwings, and one of the last birds of the day was an adult Bald Eagle that flew directly over the platform. The 2 Great Egrets that I had there earlier in the week were nowhere to be seen. All in all, a good day of birding, with the promise that shorebird migration is already underway! Huge thanks to Ken for the call.