I received a text today from John Haas that certainly improved my Monday – he had located a BAIRD’S SANDPIPER at Apollo Plaza in Sullivan County. I headed over after work and I was not disappointed. The bird was easily located as there were only two birds present, the other being a Killdeer. I parked and took some shots of the bird and fortunately the bird kept slowly working its way towards me. This is a beautiful bird, I guess  I say that often, but while I was there I couldn’t stop thinking it. Huge thanks to John for locating the bird and alerting me!

I only had time for a quick stop by 6 1/2 Station Road Sanctuary on this Sunday evening. The place was loaded with birds, mostly American Robins, Blue Jays, European Starlings, and, to a lesser degree, Northern Flickers. It would be hard to put a number on the robins, starlings, and jays, but definitely close to 100 for the robins and starlings and over 50 for the jays. I had a much more modest number of flickers, but to me, 6 is still a decent number for Northern Flickers. All the birds were quite active, moving around a lot, feeding and a large group of starlings were bathing just off the trail. The flickers were jumpy at first, but then seemed to get used to my presence and I got a few shots.

Other noteworthy observations: The only shorebirds present were several Killdeer and what looked like one Least Sandpiper. Great Egrets are still present in numbers, with approximately 15 present tonight.

I had a nice collection of shorebirds at 6 1/2 Station Road Sanctuary tonight. The birds have seemingly totally abandoned the pond at the end of the Citgo Trail and can now be seen easily in the mud flats of the marsh from the Heritage Trail. Here’s my list:

**One year ago this week at www.orangbirding.com: On September 29, 2013, I also had a Pectoral Sandpiper – this time at Morningside Park in Sullivan County. See that post here. **

**Two years ago this week at www.orangebirding.com: I had American Kestrels and Sparrows at Wallkill River NWR. Check it out here. **

I had some things to take care of at the house this morning before getting out, so I got a little bit of a late start. Because of this, I decided to go to 6 1/2 Station Road Sanctuary again, since it is only a few minutes from the house. I was not disappointed. The highlight was getting great looks at a Yellow-billed Cuckoo, one of my favorites to see and photograph. Other good birds for me included this Blue-headed Vireo, a bird that I have not had much luck photographing:

I also got what I think is sort of an unusual life bird for me at this point in my birding (#314). While walking the Heritage Trail, I had a pair of PURPLE FINCHES. This is a bird that for some reason, I have never gotten a good enough look at over the past few years to report with confidence. I got a great look today and I also managed a couple of photos:

Other notable observations include an apparently growing number of Green-winged Teals in the small pond at the end of the Citgo Trail. Shorebirds have abandoned the small pond and today I located several Killdeer and a likely, but too distant to be sure, Least Sandpiper on the far side of the large marsh (looking from the Heritage Trail). I will keep my eye on this area for sure. I ended the morning with 37 species which is not too bad. You can see my list at the bottom of this post. Here’s one more shot of the cuckoo:

I stopped by 6 1/2 Station Road Sanctuary after work today. It started out slowly, particularly because I was hoping for shorebirds and found NONE. But, in the end, it was a relatively productive day with 25 species being identified. Here’s my list for the day and some more photos:

Six and a Half Station Rd. Sanctuary, Orange, US-NY

And now to catch up a bit. On Sunday evening I got this shot of a juvenile Black-crowned Night-Heron at Wallkill River NWR:

Then, on Monday of this week, I stopped by Mount Peter Hawk Watch and got some decent birds including an adult Bald Eagle and a juvenile Northern Harrier. On my way out, Linda Scrima alerted me to the fact that there were some shorebirds at the Wallkill River NWR:

On Tuesday I stopped by Mount Peter again and got very lucky. Tom Millard and I had a total of 278 Broad-winged Hawks and 2 Sharp-shinned Hawks from 4:00 to 5:00. Then on  Wednesday I had some business in Wappingers Falls NY, so I stopped by Denning’s Point on my way back. It was not very birdy, but I did get a shot of this young buck:

I’ve been wanting to post this series of photos for a while. I took these back on July 18th while kayaking at the Bashakill Wildlife Management Area. It was an extremely foggy morning, so much so that until late in the morning, the fog prevented any good photos. This Great Blue Heron was shot just as the fog had lifted.

I did my first shift of the year as counter at Mt. Peter Hawk Watch last Saturday. I didn’t do a blog post because it was uneventful – I counted only 5 migrating hawks in 6 hours of observation. Today was quite a different story. Despite the cloudy and drizzly weather, I surpassed last week’s total in the first 10 minutes of the watch. The highlight was the third hour of the watch, when I had 301 Broad-winged Hawks pass through. To make it even better, the birds were flying relatively low and could be seen easily with the naked eye. I had two large kettles – one with 126 BWHAs and the other with 105. I was so involved with trying to get a good count that I neglected to take any photos. I had one more sizable kettle of 49 birds where I remembered to get the above photo. My total for the day was 337 migrating raptors. All were Broad-winged Hawks with the exception of a single Osprey. Here’s my report, as submitted to HMANA at hawkcount.org:

Visitors:
Visitors included: Karen Miller, Carol Linguanti, Carol Pastushok, and
Grace Woleslagle.
Weather:
Cool and cloudy with a light drizzle beginning in the third hour of the
watch and developing into rain on and off during the last hour and a half
of the watch. Winds were from the East at 10 km/hr and temperatures ranged
from 12 to 15 degrees Celsius.

Raptor Observations:
During the third hour of the watch, 301 Broad-winged Hawks were observed.
Kettles formed to the northeast of the platform and most birds flew
directly over the viewing platform – low for Broad-winged Hawks, all could
be seen easily with the naked eye.

**ONE YEAR AGO ON THIS DATE AT ORANGEBIRDING.COM: American Golden-Plovers in Pine Island.**

So, after talking to some of the other counters at Mt. Peter Hawk Watch and getting some feedback from John Haas, the consensus was that the two Lesser Yellowlegs in the previous post were just two young birds playing in such a way that it will prepare them for adulthood.

Today, out at Wallkill River National Wildlife Refuge, I came across two more young birds interacting – first a curious young Northern Harrier that flew in close to me. He was joined shortly after by a young Cooper’s Hawk and the two tangled for a bit. More playing/training? 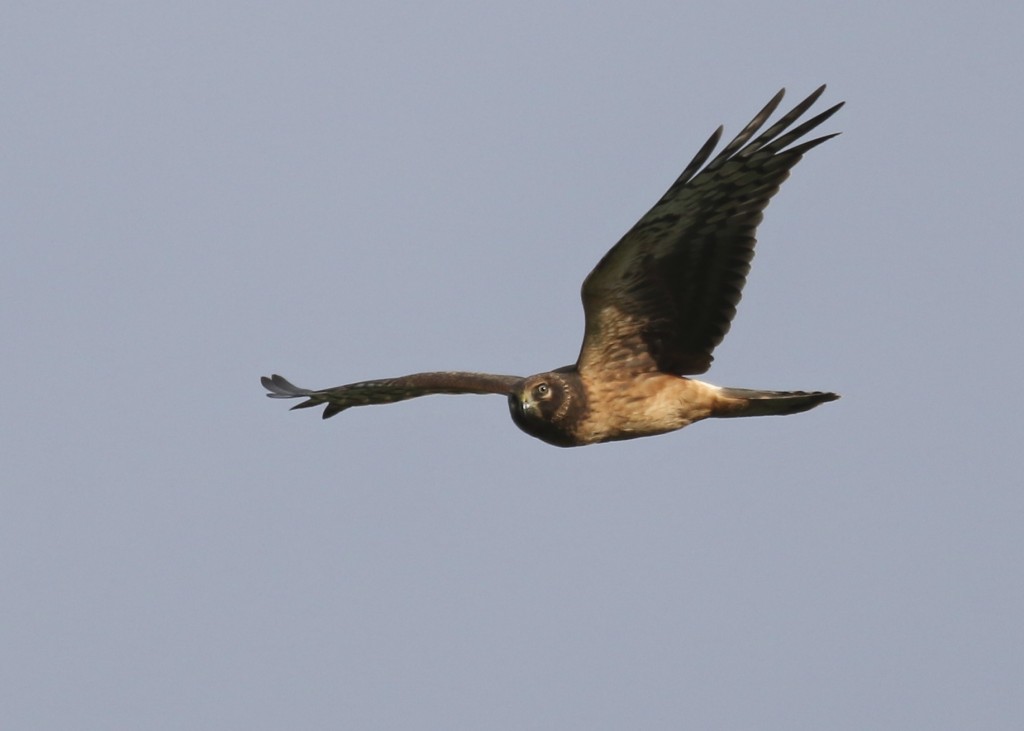 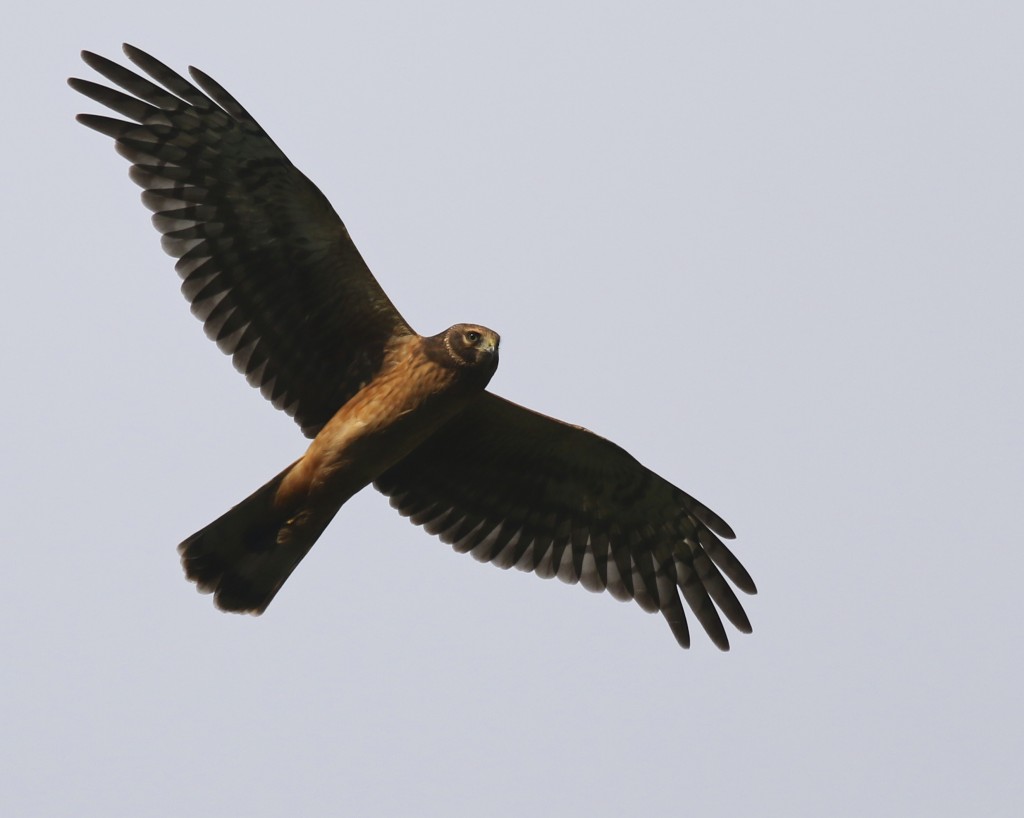 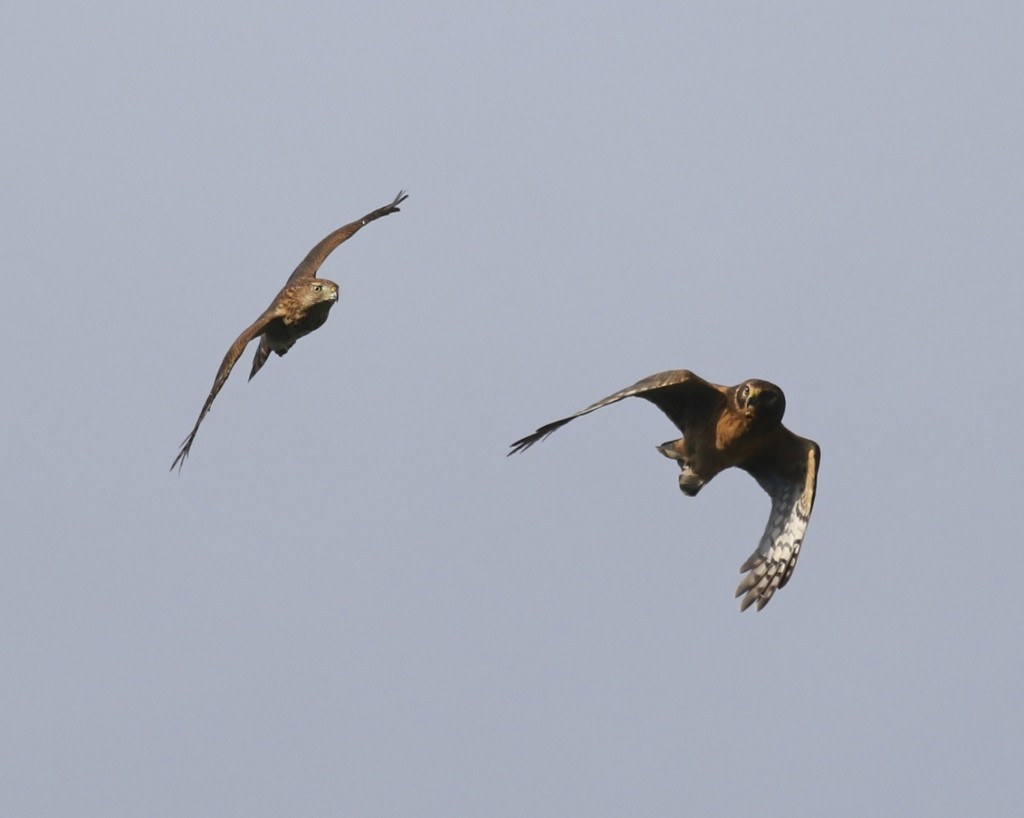 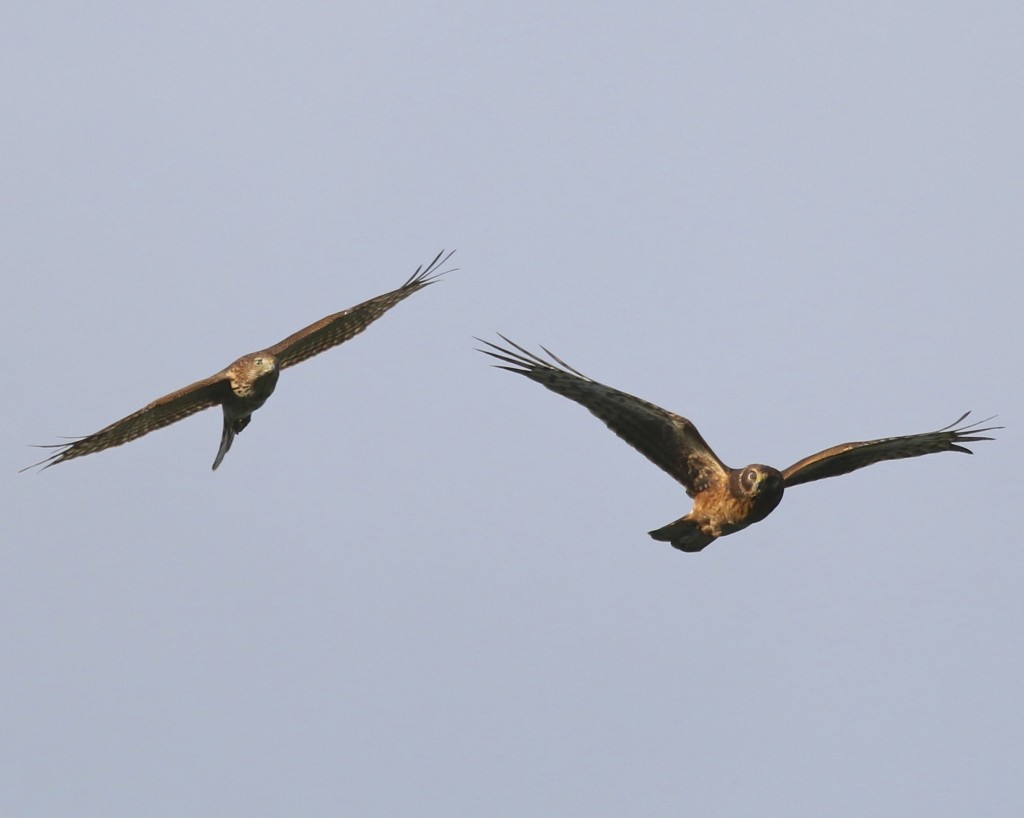 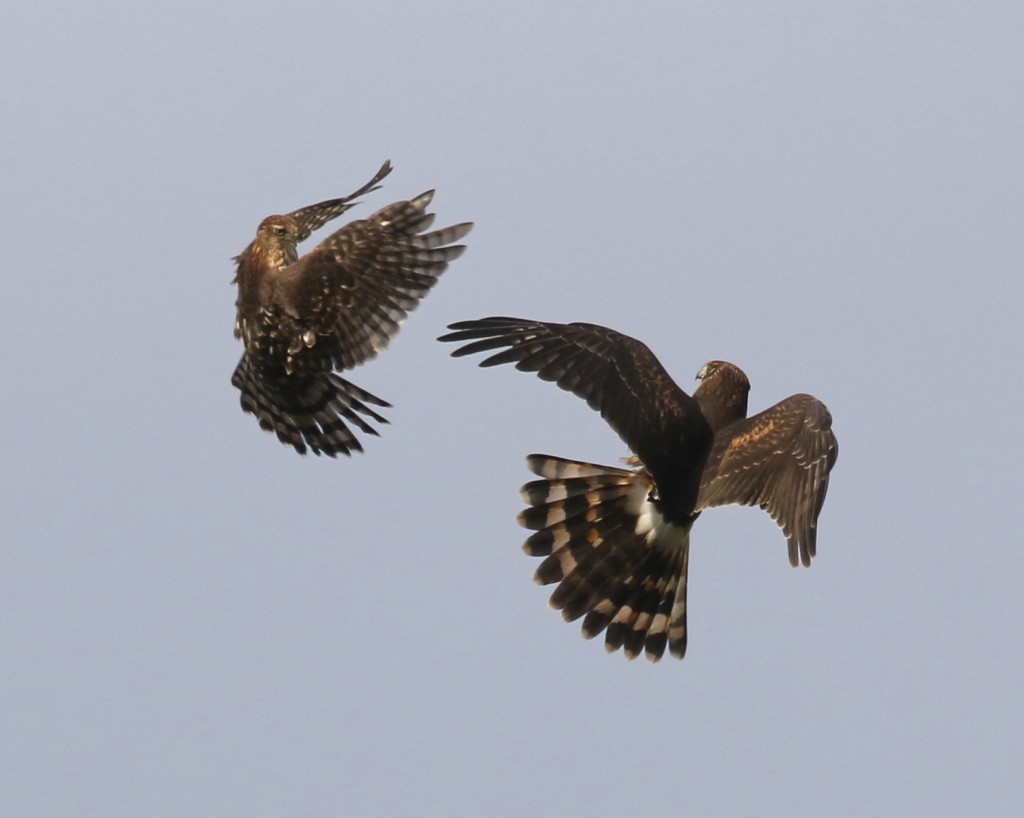 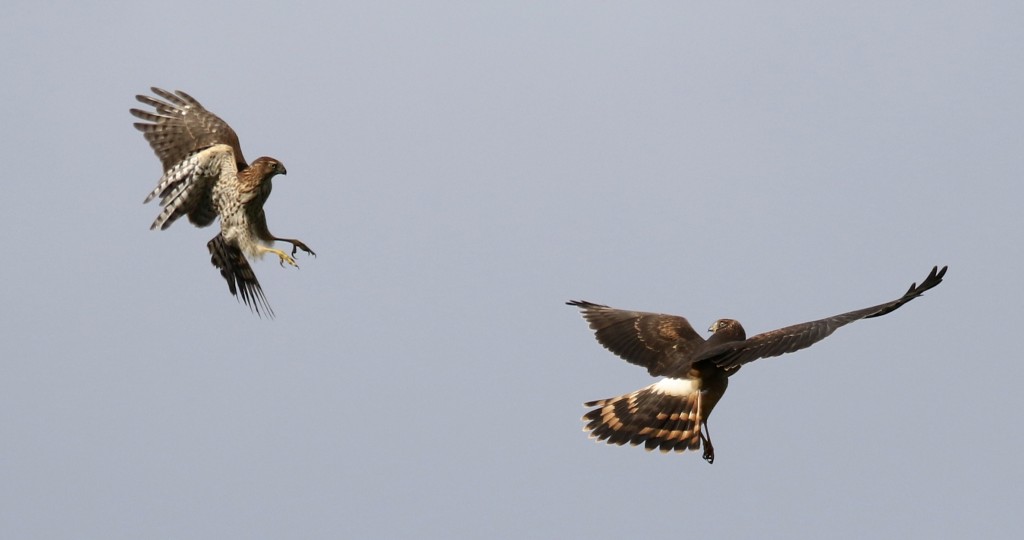 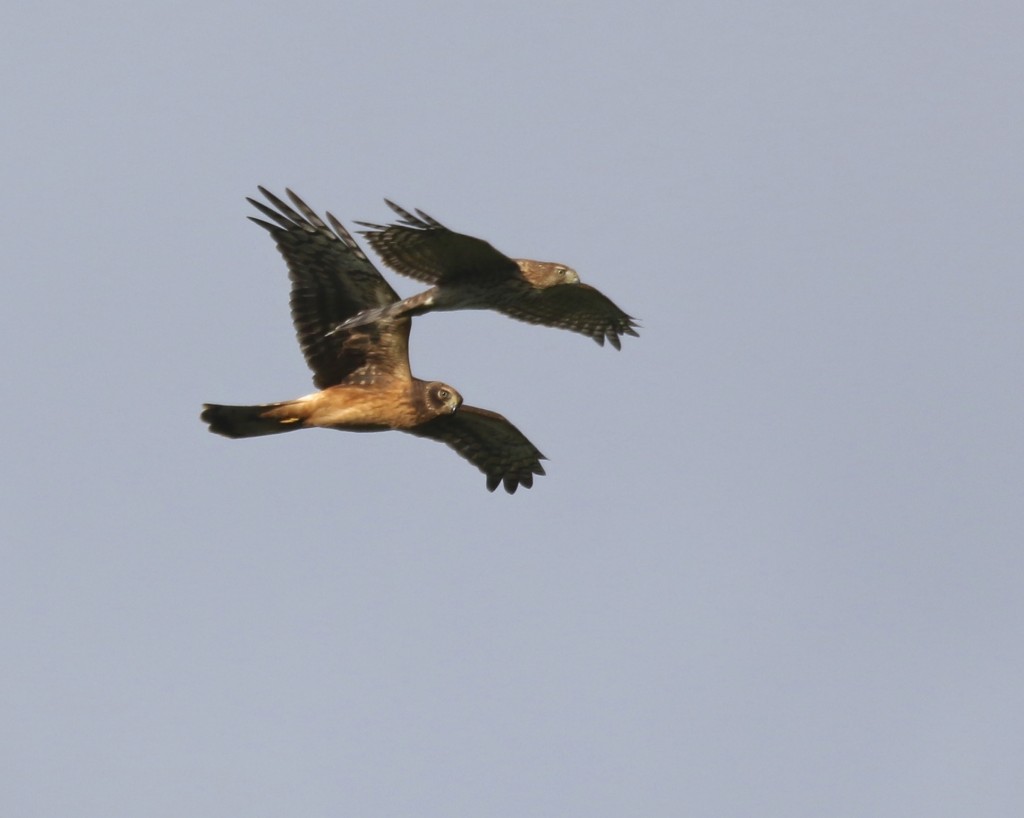 This evening I stopped by the small pond at 6 1/2 Station Road Sanctuary and was treated to a pair of Lesser Yellowlegs doing who knows what for nearly five minutes. It involved a lot of hopping around and chasing one another. I really enjoyed seeing this; the photos are distant and heavily cropped, but I really like them. Any thoughts on this behavior are certainly welcome… 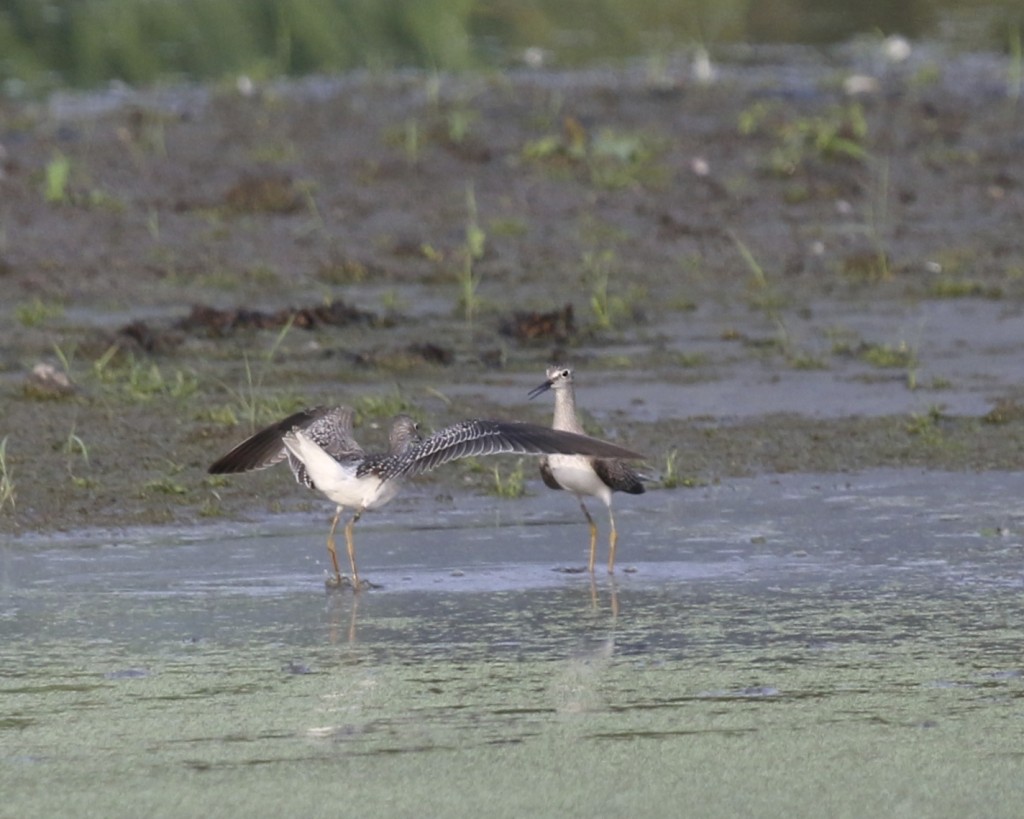 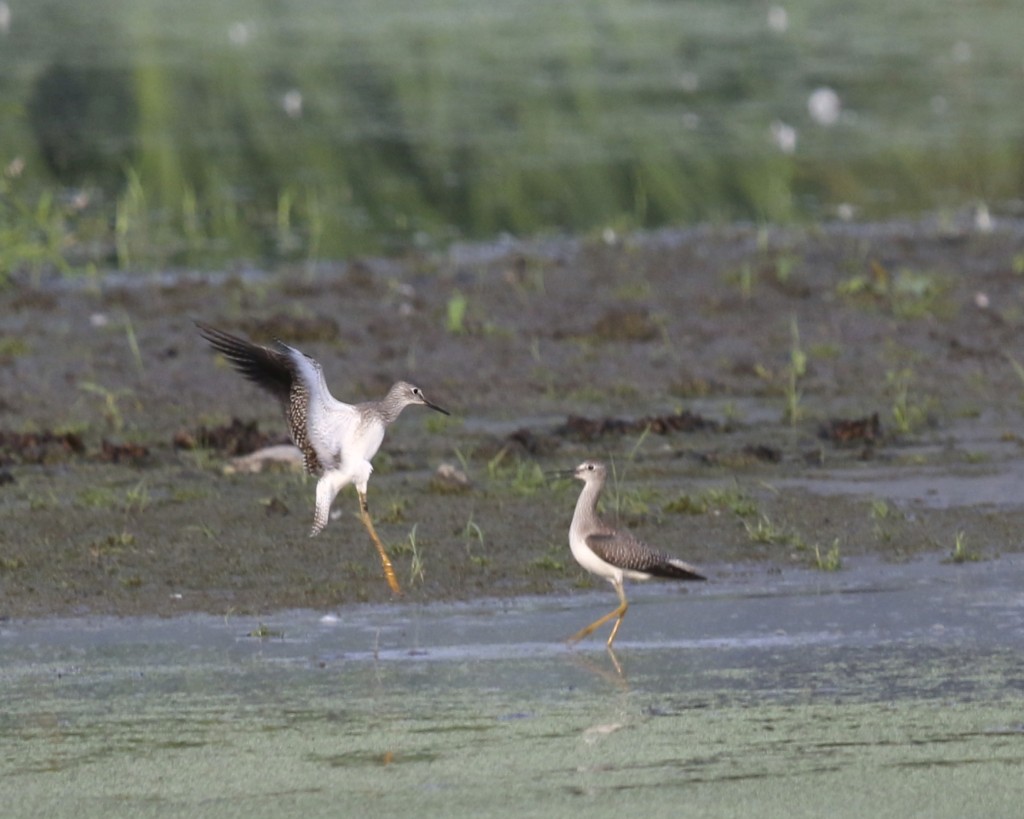 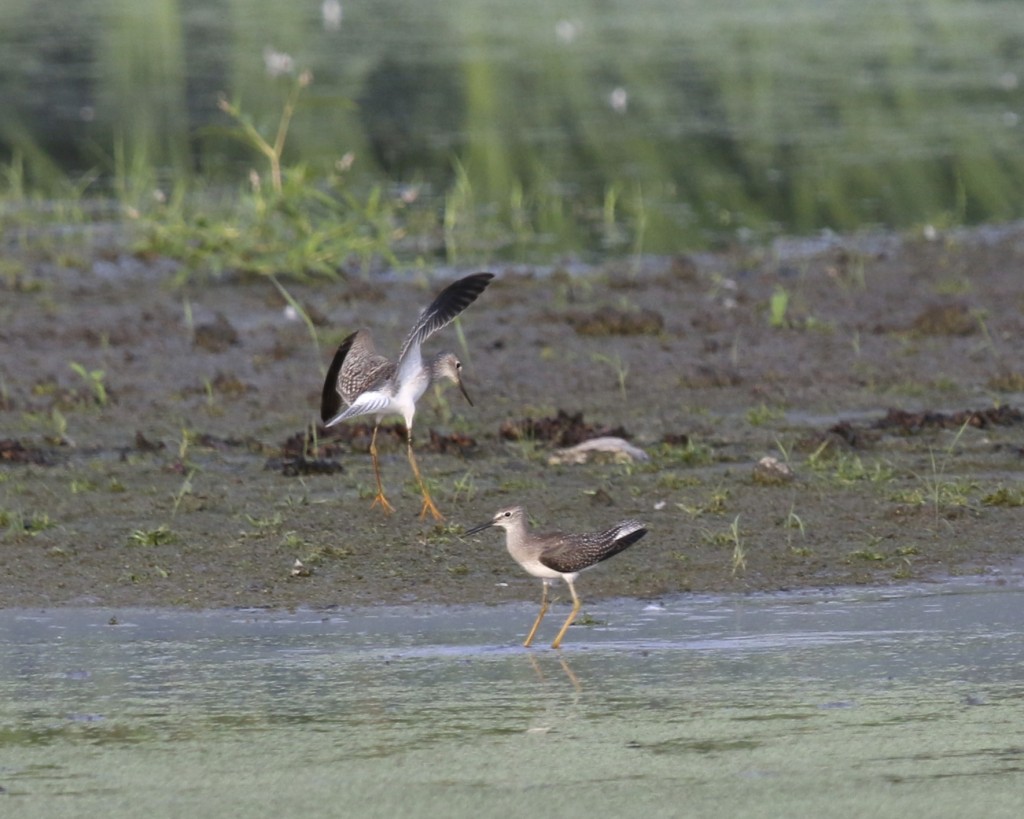 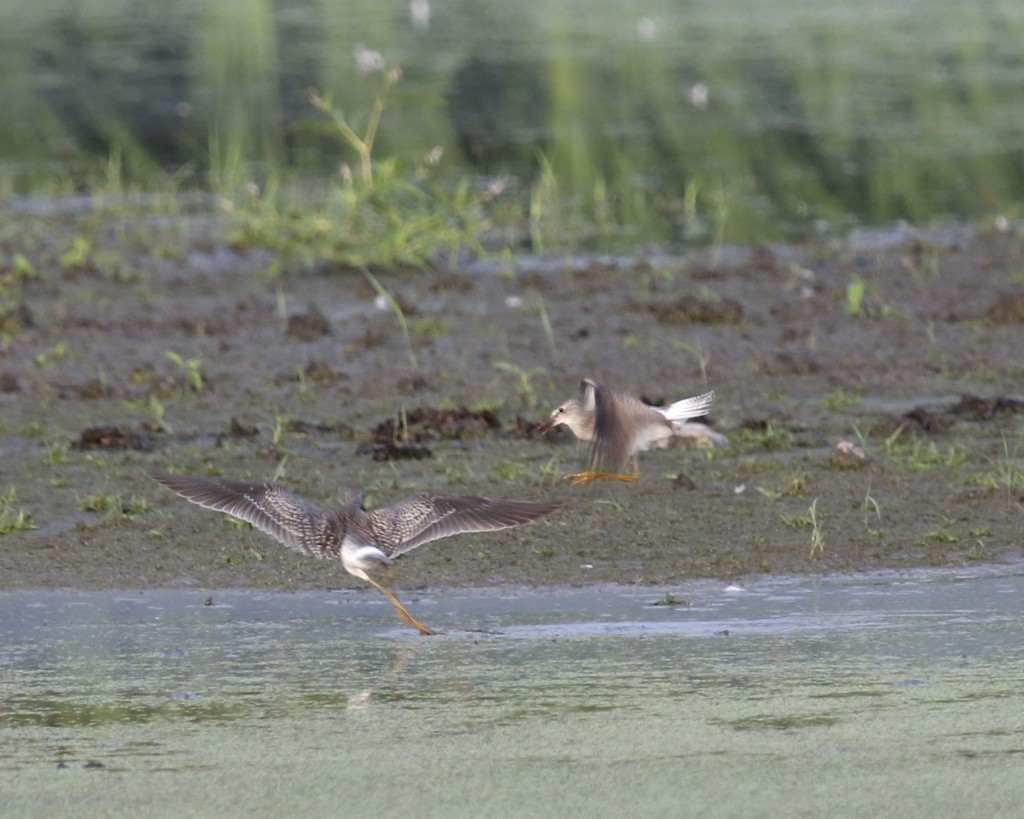 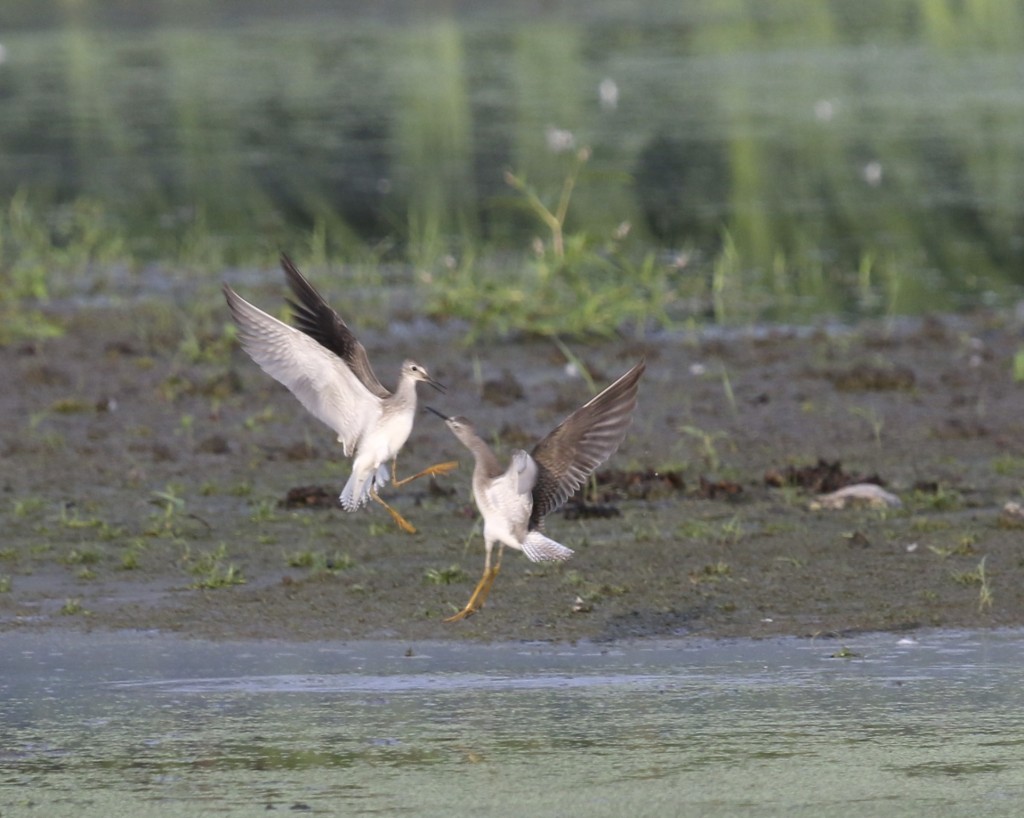 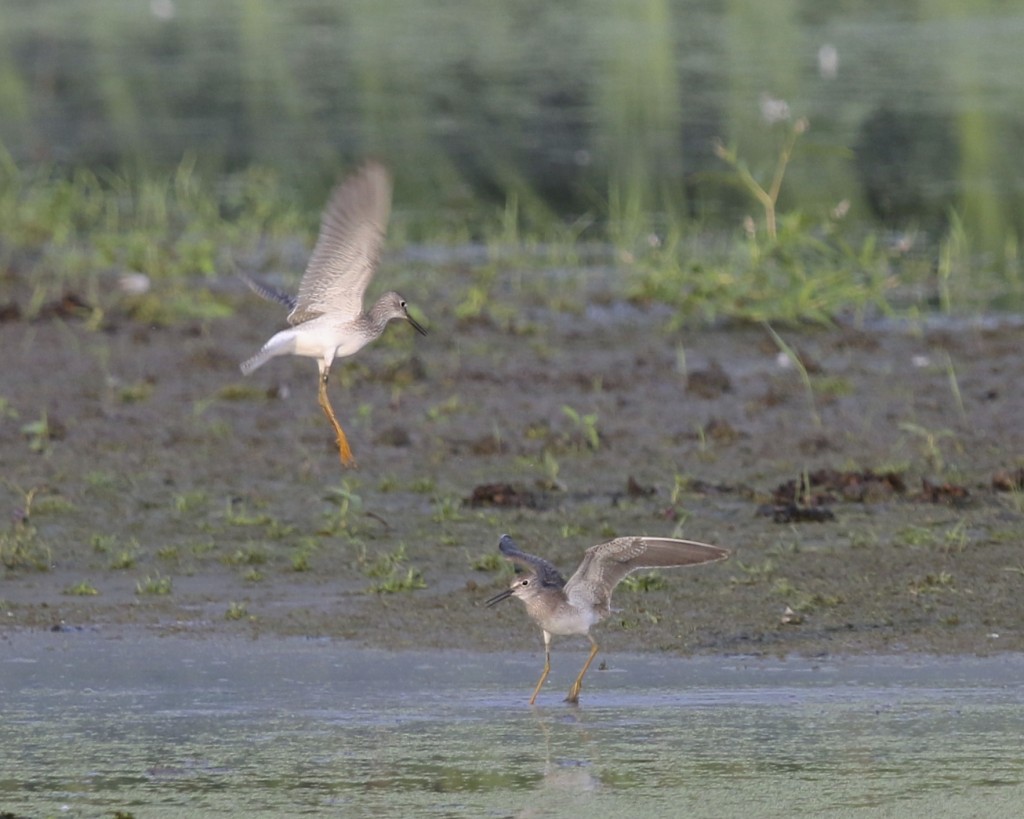 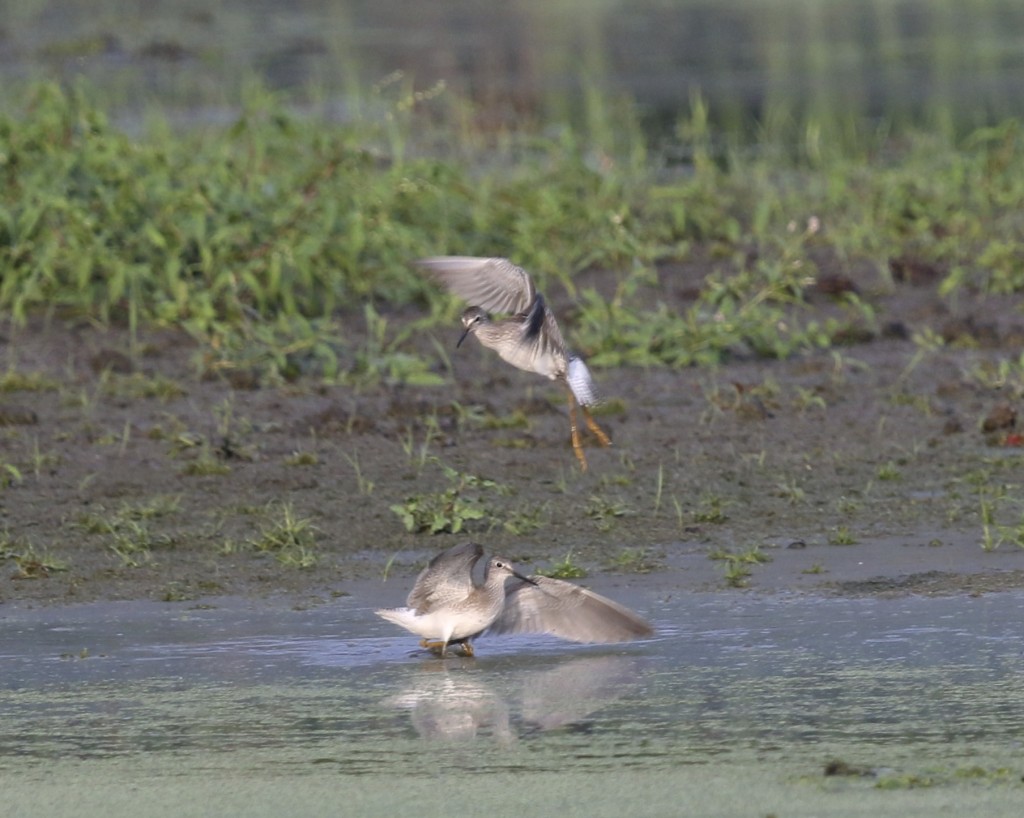 I had an interesting and fun experience in Pine Island yesterday afternoon watching a young Broad-winged Hawk hunt for insects. The bird was either unaware of my presence (I was using my car as a blind), or just didn’t care. Very close by, the hawk successfully hunted for about a half dozen insects, each of which the bird dismantled and patiently ate. While I was watch ing the bird in the field, I was pretty sure it was a Broad-winged Hawk. But, then when I got home and I thought about doing a post with the photos, I started to ask myself  – “why is this a Broad-winged and not a Red-shouldered Hawk?” Thinking about it, probably the main reason I was thinking BWHA was the size of the bird. To me, the bird appeared small in size – likely the smallest buteo that I have ever seen perched. The hawk’s behavior was another reason; a BWHA hunting insects in a field made sense to me, though I’m not sure why, perhaps Red-shouldered Hawks are just as likely to do this? I also think that at some level I was thinking about the fact that BWHAs are just starting to migrate through our area. For me to post about this bird, I needed to have a more positive identification, so I did a google search and found a very useful comparison of juvenile Broad-winged and Red-shouldered Hawks, provided by the International Wildlife Rehabilitation Council. The following photos illustrate some of the field marks exhibited by this bird that lead me to believe that the bird is indeed a Broad-winged Hawk:

I guess the bird had eaten enough and it flew (not very far!), and perched in a tree on the roadside:

A few more shots of the bird: