I was thinking that the best chance to see the Liberty Loop’s ROSEATE SPOONBILL enter Orange County was to wait until just before night fall and hope it flew into New York on its way to roost. Rob Stone had a different idea. His idea was to get up early and watch as the birds (the ROSP and the Great Egrets) returned to the marsh after a night at of roosting. He tried it on Saturday morning, but arrived too late. We agreed to try on Sunday; Rob thought if we arrived just after 5:00 am, the timing would be good. Well, I struggled to get out of bed and ended up rolling in at 5:40 am. Rob was on the viewing platform, his bins were up and he was on something. I hustled to the platform and he got me on the spoonbill. It was heading north along the west side of the marsh. I kept thinking it would put down in New Jersey, but it held on and flew over the berm an into Orange County! We hustled down the path to try for a better look, running, jogging, and then fast walking, the whole time keeping our eyes pinned on the area where the bird went down. When we were nearly at the northwest corner, we watched as the spoonbill took flight, went back over the berm, and into Sussex County once again. I couldn’t believe it stayed in OC for such a short visit – it could only have been 4 or 5 minutes tops! Still, we were pumped to have seen it, and who knows, this could be the start of some new behavior for the bird where it starts to spend some time in OC?

Rob and I decided to continue and walk the entire Liberty Loop. We eventually relocated the Roseate Spoonbill, it was in the general vicinity of where it was first seen last week. We also had a Glossy Ibis among a large crew of Great Egrets. Green Herons are numerous at the refuge right now, and we also located two BLACK-CROWNED NIGHT HERONS perched in a tree on the west side of the loop. My best photo op occurred at the south end of the loop, where we had several LEAST BITTERNS flying around and perching out in the open. It was awesome, Rob enjoyed seeing them and I enjoyed getting more photos of one of my favorite birds.

Afterwards, I went to the black dirt to try for shorebirds. I did alright, with a Solitary Sandpiper and a Lesser Yellowlegs at the Camel Farm, as well as a Least Sandpiper and 3 SEMIPALMATED SANDPIPERS at Turtle Bay. I was heading to Pine Island Turf Nursery when I got a notification that John Haas had relocated the ANHINGA at Morningside Park in Sullivan County. I rushed over, but unfortunately arrived after the bird had already flown. The Anhinga was first seen and considered a one-hit-wonder six days ago! Where has it been all this time? When will it show up again? I really hope I get another shot at that bird, that would be exciting. Great day of birding!

This past weekend, Kyle Dudgeon joined me in what has become a yearly trip for me to the Adirondacks to photograph Common Loons. We arrived Saturday afternoon, set up camp, and we were heading out in our kayaks onto Follensby Clear Pond by early evening. Moments after I got in the water, a Common Loon popped up right next to my kayak, checked me out for a minute or so, and then dove under. We spent the evening on the pond with several cooperative adult birds; the weather was great and we had some decent light for photos.

We timed the trip so that we might be able to see some loon chicks. When the sun had set on Saturday evening, we were questioning our timing since we’d seen only adults.

Over dinner, I double checked when I’d had chicks there in the past – our timing seemed okay, and when we woke up Sunday morning at our campsite there was an adult with a chick on the pond about 75 yards out. Unfortunately the weather had taken a turn for the worse, and it was a rainy, dark, morning. We enjoyed seeing the adult feeding the chick and we had some real excitement when an intruder loon came into the area and “our” adult tangled pretty good with the intruder, eventually forcing him/her out of the area. The chick, in the meantime, hid itself along the shore. We knew where it was, but only because we saw it go there – it was REALLY well camouflaged. Eventually the adult came back and the two were reunited. It wasn’t long after that when the second adult arrived and the two adults took turns feeding the chick. It was pretty cool stuff to see, even though the distance and lack of light limited the number of decent photos.

Kyle was determined to get into the water and photograph the loons using a boogie board to prop his camera on. 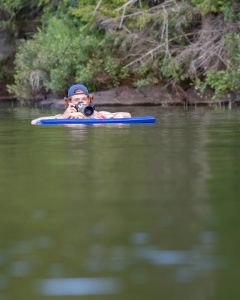 The idea is to get as low of an angle as possible, which always seems desirable for bird photography. On Saturday, at first, he tried it in deeper water and struggle to keep the camera from getting wet. Later he tried where he could stand and he had much more success. He couldn’t convince me to get out of the kayak and try it (I’ve had enough camera issues recently, I don’t need to drop one in the pond!), but he ended up swimming with the loons both days and I have to say I love the low angle he achieved:

It was a brief, but excellent weekend with the loons. It would be interesting to spend a summer with these birds – you would learn so much and the photo ops would be insane. Until that happens, I’ll try to keep up the yearly visits.  Here are some more of my favorite shots from the weekend:

I wonder how many people can say they saw breeding Common Loons with a chick in the morning and a Roseate Spoonbill in the afternoon? Without taking a flight? I’m guessing not too many, if any at all, but that’s exactly what Kyle Dudgeon and I did today. Just as we were wrapping  up our yearly trip to the Adirondacks after a morning of kayaking in the rain (and swimming in Kyle’s case) with Common Loons, I got a phone call from Linda Scrima. She had located a ROSEATE SPOONBILL at the Wallkill River National Wildlife Refuge’s Liberty Loop. Apparently  a photo of a ROSP had been posted to the refuge’s Facebook page and Linda followed up on it early this morning and found the bird on the west side of the loop, just over the border into Sussex County, New Jersey. As Kyle and I got on the road, we did some quick figuring and we knew that we would certainly try for the spoonbill. Five or so hours later, we headed down the trail and joined a number of birders and photographers gathered to see the bird. It was very strange to me to see this bird up in our area, after having previously only seen them in their normal range of Florida and Texas.  It was a life bird for Kyle, so that was exciting. The bird spent the duration of our time there partially hidden by vegetation, so Linda sent me one of her pics from earlier in the day to use for this post – thanks Linda!

I have a good number of Common Loon photos to get through, but I will post in the next day or so; it’s one of my favorite posts of the year, so I’m looking forward to it. Here is a teaser from earlier this morning, during a break in the rain:

From July 7th to the 14th, Tricia and I, along with seven other members of her family rented a house right on the beach in Rossadillisk, Ireland. Rossadillisk is a Townland in County Galway, Ireland. It is very small, taking up just .29 square miles of area. But, it is certainly not the smallest, as, of the approximately 4,556 townlands in County Galway, it is the 2,483rd largest. For such a small area, Rossadillisk packs a pretty mean birding punch. There is great birding along the road – with many fields and plenty of thick vegetation. And then, there is always the beach. I got into a nice routine of getting up nice and early. I would bird the beach right in front of our house and then set off to bird along the road, which is where I found most of my birds. I would finish the morning by birding what I called the “far beach”, which was much larger and more productive than the beach right in front of the house.

For the week, I tallied 46 species of birds in that .29 square miles. I mostly enjoyed the challenge of trying to find birds and identify them; in the beginning, identifying birds was not coming very easily at all.  It felt a lot like starting over birding – I came to realize how much I know the birds in our area just because I’ve had plenty of experience with them before and because they are supposed to be there; they are expected. And, I also realized that I’m not actually spending all that much time truly looking at birds and recognizing and knowing their field marks. Additionally, I hadn’t done much homework before the trip, and the guides I was using* just didn’t seem to be quite as comprehensive as the ones we use for birds in the eastern United States, and finally, it was the time of year when there were many young birds around, so some of the plumages I was seeing were not in the guides. This made for some very interesting and rewarding birding, in spite of it being frustrating at times.

I hope you enjoy this little taste of Ireland’s birds – I’ve included my favorite shots from my mornings in Rossadillisk. If I’ve misidentified any birds, please let me know in the comments.

*I used the Complete Field Guide to Ireland’s Birds by Eric Dempsey & Michael O’Clery, as well as two apps on my phone: iBird UK Pro and Birds of Britain and Ireland by Natureguides.

I had a fantastic week in Connemara, Ireland, a  district located on the west coast of the country, in the northwest corner of County Galway. The biggest surprise of the week was, in spite of renting a house right on the beach, I spent a large portion of my birding time with the local passerines. Songbirds were numerous on the road leading to our house and I walked it nearly every morning, trying to find and identify Irish passerines. I have loads of photos to get through, so I will put together a post or two as soon as I can. Until then, enjoy this European Goldfinch, a bird that reminded me very much of our own American Goldfinches.

Tonight, Tricia and I are flying to Ireland for a week of vacation. It’s been a while since we were there and I am excited because I feel like both my birding and my photography have improved to an extent that will make the trip that much more enjoyable for me. Because it’s a family vacation, I don’t have any concrete plans yet for birding; I think I’m going to mostly play it by ear, but regardless I know I’ll get out a good bit and it should hopefully be interesting. Stay tuned – with any luck, I will publish my first post about it a week from Sunday (07/15/18).