I had to break tradition this year on Black Friday. Due to the recent substantial snowfall, Wildlife Drive at Montezuma National Wildlife Refuge was closed, so I decided to try a new spot. I headed to Onondaga Lake Park’s West Shore Trail to follow up on recent eBird reports of COMMON REDPOLLS there. I’d never been to the park; I found the parking area easily enough and as soon as I got out of my car, a local photographer named Tim was kind enough to give me the lay of the land. There is a network of trails that run along the shore of the lake and around the amphitheater. Tim went off on his own, but we met up not too much later and we ended up spending the rest of the day birding together.  The trail was birdy with many of “the usuals”, with American Robins being the most prominent. Raptors were around in decent  numbers; we had several Red-tailed Hawks, a couple of young Bald Eagles, and a Cooper’s Hawk (which I misidentified in the field as a Sharp-shinned Hawk) that did a very nice, close flyby. The lake didn’t have as much waterfowl as I’d hoped, but we did have six species, including a distant large flock of what looked to me like Scaup, but I’m not sure which one. We saw fresh Coyote tracks in the snow, as well as some scat; it would have been excellent to catch up with one of them!.  The highlight of the day, however, was coming across a small flock of COMMON REDPOLLS just off the trail. It’s been a long while since I’ve seen them, back in 2013 at the Shawangunk Grasslands. I’ve seen one report this year already in Orange County, let’s hope they continue. It was a good day of birding, it was a cool, crisp day and we hiked maybe 5 miles and totaled 28 species.

I had a nice weekend of local birding; after two weeks with almost no birding, it was just good to be out and about. For the most part, the birding was uneventful – I finally managed to locate a Fox Sparrow in Orange County which was noteworthy on a personal note as it was my 220th bird in the county this year.

The real excitement, however, happened late Sunday afternoon. I picked up my car from the shop and just wanted to do some last ditch effort birding (I didn’t want the weekend to end!). So, I headed to Skinner Lane, since I was nearby. It was mostly quiet until I heard the familiar sound of SNOW GEESE calling over my head. I didn’t even have my camera unpacked, so I grabbed it quickly and snapped some shots. Three more large skeins flew over, and then I noticed in the far distance, well south of my location, a large group of Snow Geese putting down. I’d put the word out, and I eventually met up with Ken McDermott and Linda Scrima. Ken had seen them putting down too – he thought maybe at Pine Island Turf Nursery, but we had no luck there. It wasn’t until we were leaving that Linda noticed a large group of SNGOs in flight just off of Route 1, west of the turf nursery. They were hidden once they put down, but we were able to get some grainy shots (darkness was coming quickly) of the birds in flight over the fields. What an excellent way to end the weekend! 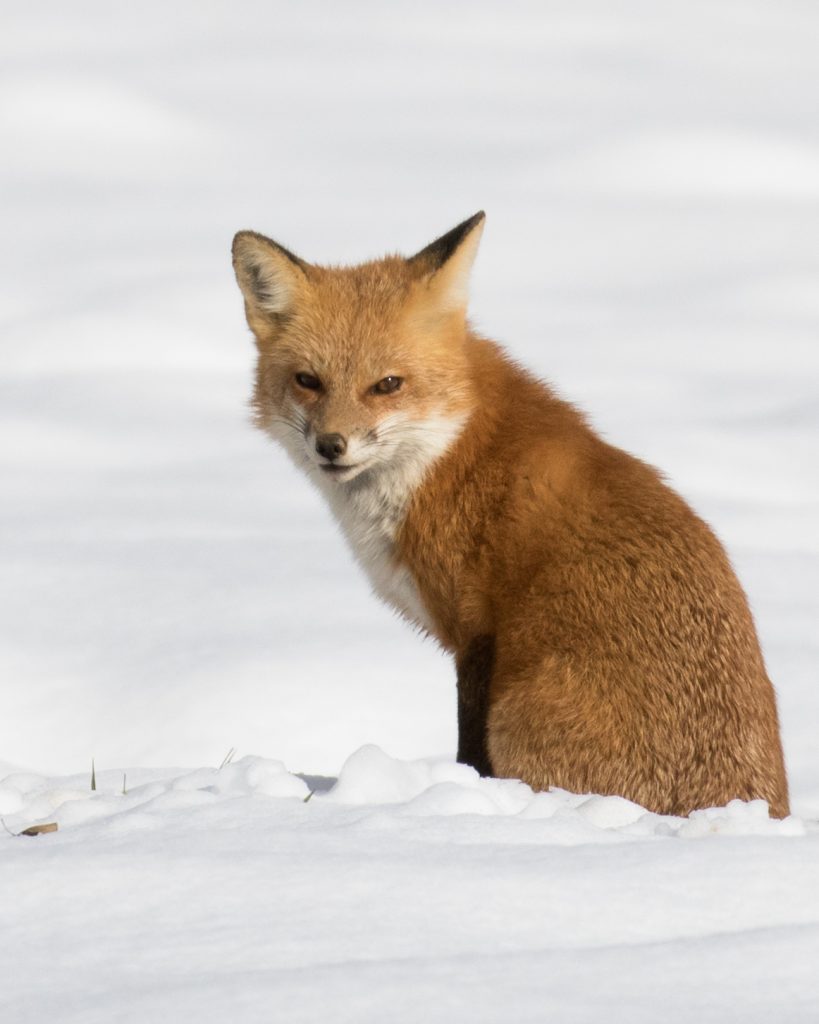 Since the times have changed, I have not taken my camera to and from work like I normally do. With it getting dark before I get out, it just isn’t worth dragging it back and forth. But, today I went in late because of the snow. As I made my way out the front door, the light was beautiful. And I had a hunch. So I played it smart and grabbed it, and it sure paid off when I saw a fox in a snow covered field not far from my work. As luck would have it, there was a good area to pull off and I was able to take some photos before continuing on to work. You never know where or when you’ll see something good! 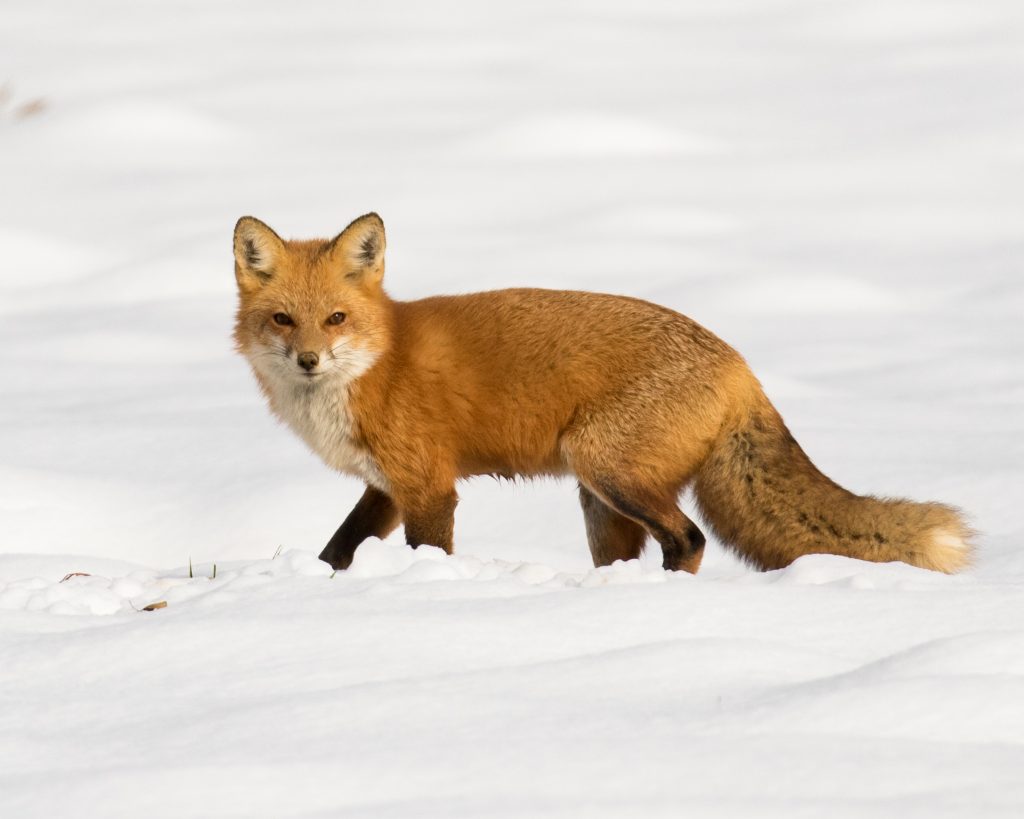 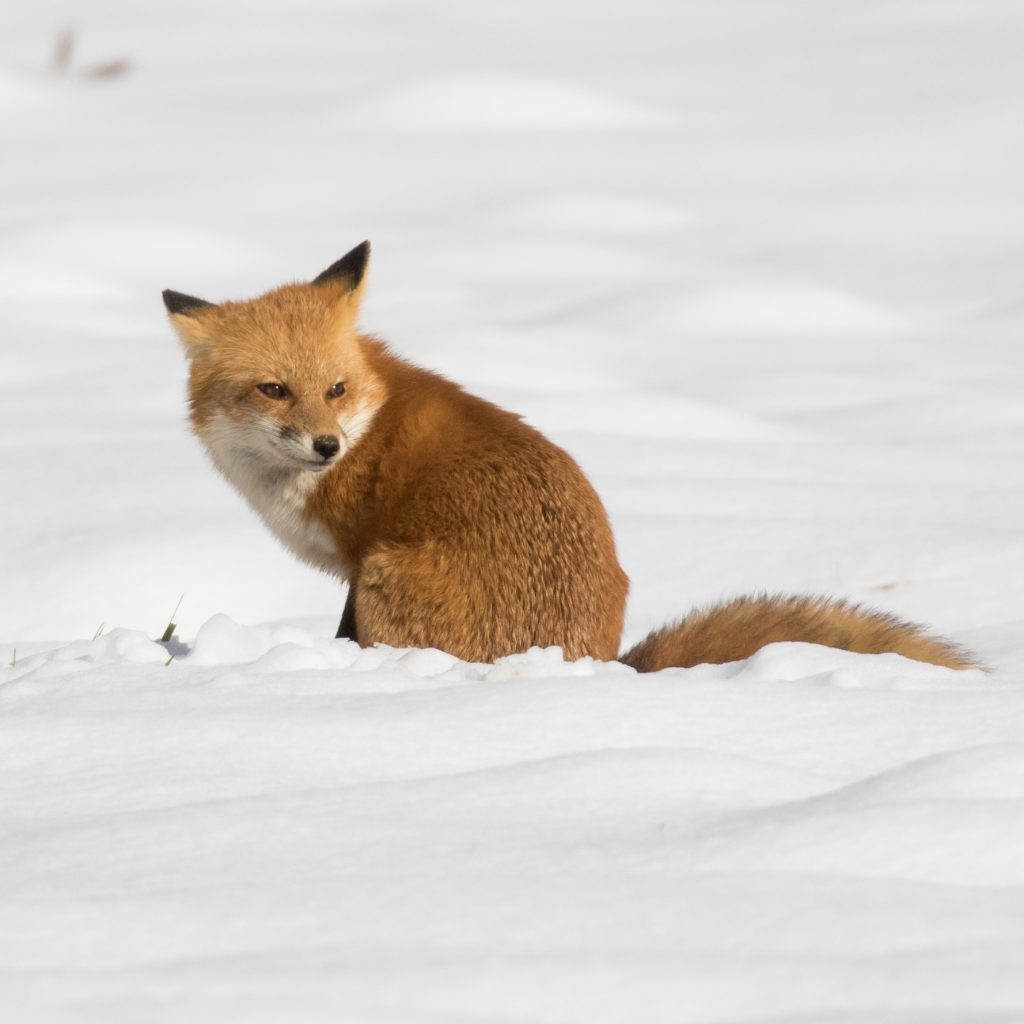 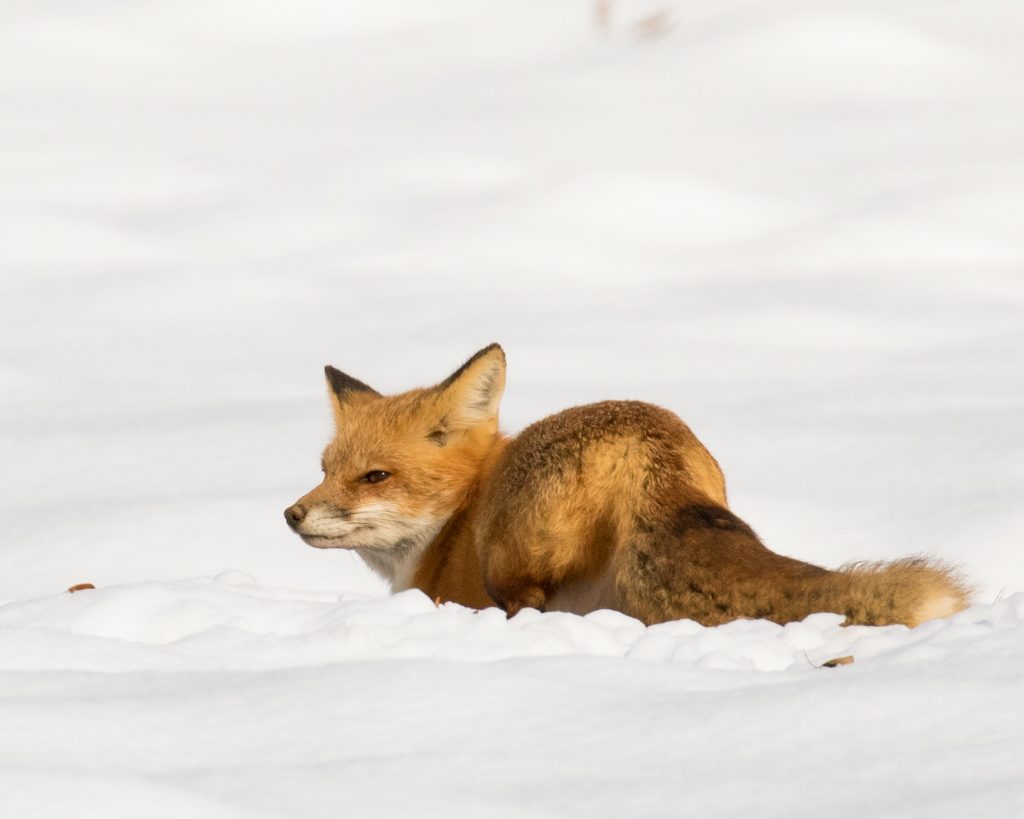 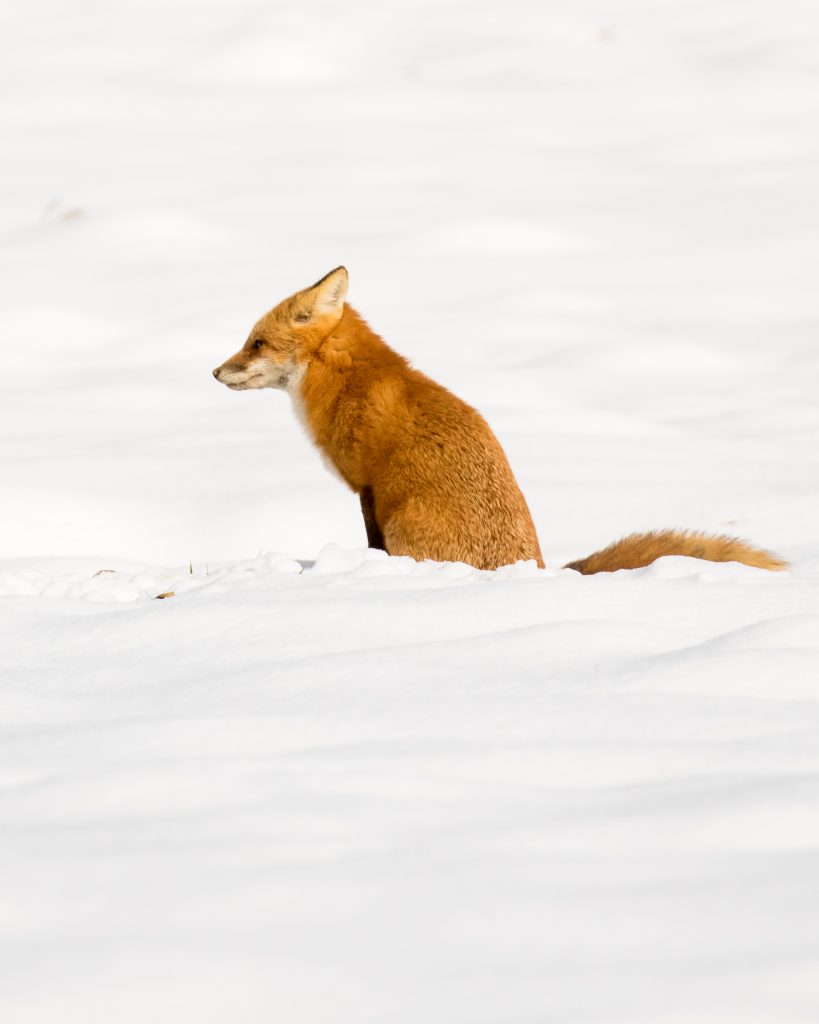 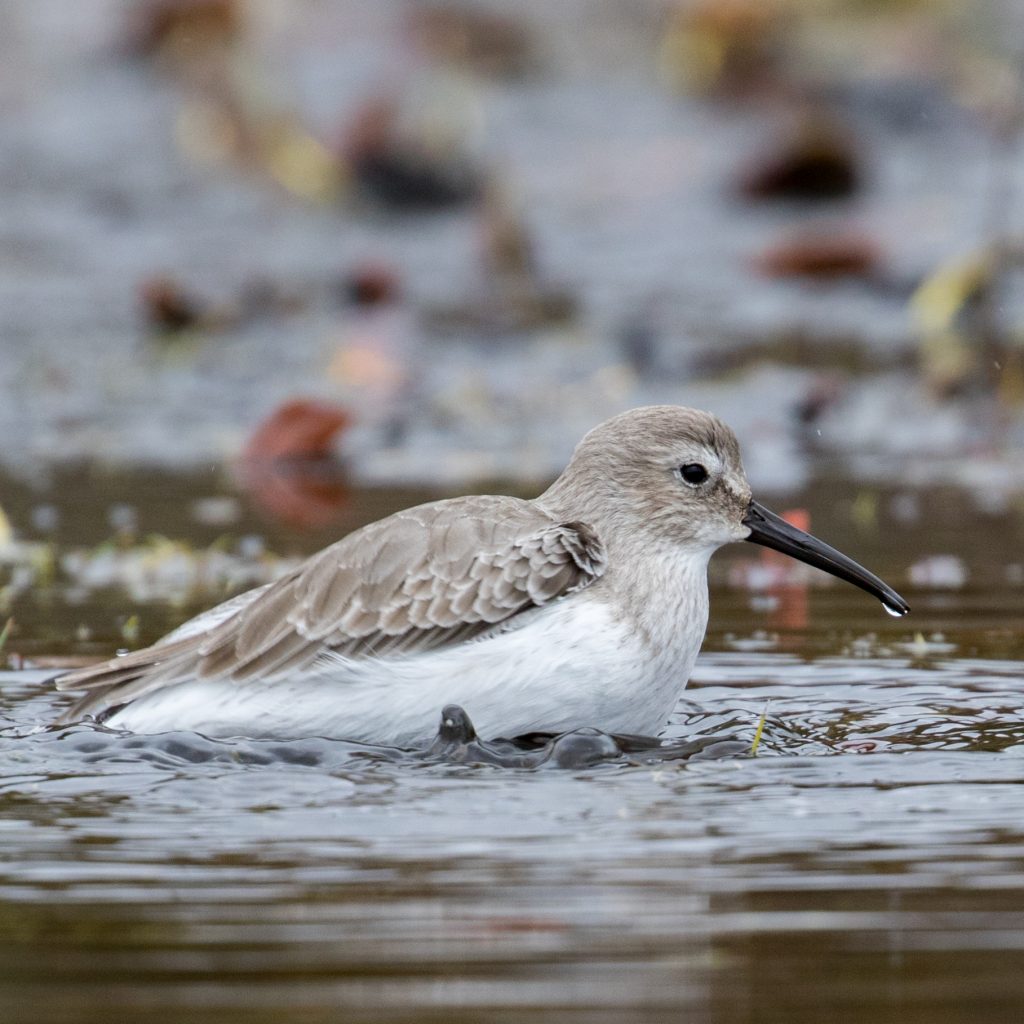 QUICK POST: Family obligations pretty much kept me out of commission this weekend birding-wise, so I have nothing to post from the weekend. However,  I’ve been wanting to post this bathing Dunlin since I photographed it a couple of weeks ago out at Glenmere Lake. I’ve always liked bird images with water, particularly with splashing, spraying, or flowing water. I’ve tried to photograph bathing birds before, but usually the results are just not that great. I found these shots interesting and I hope you enjoy this glimpse of Dunlin behavior. 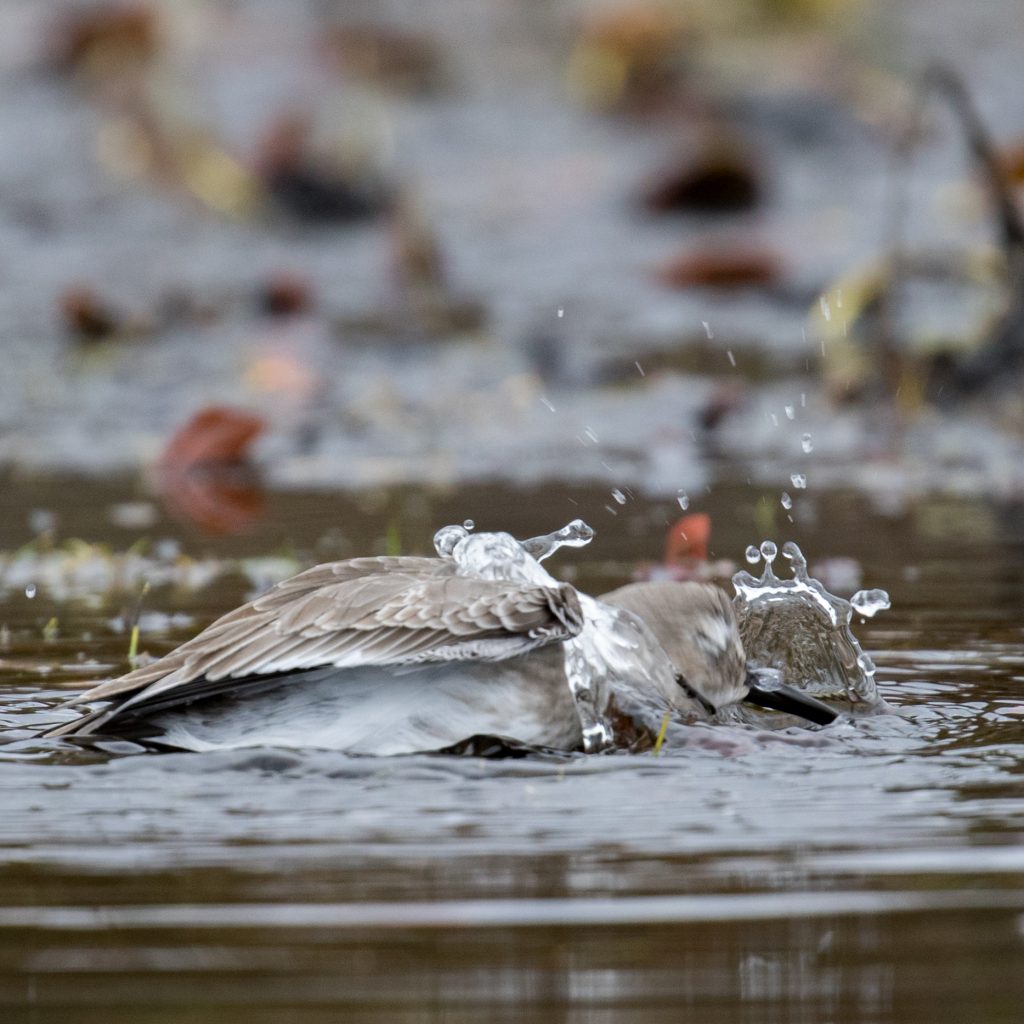 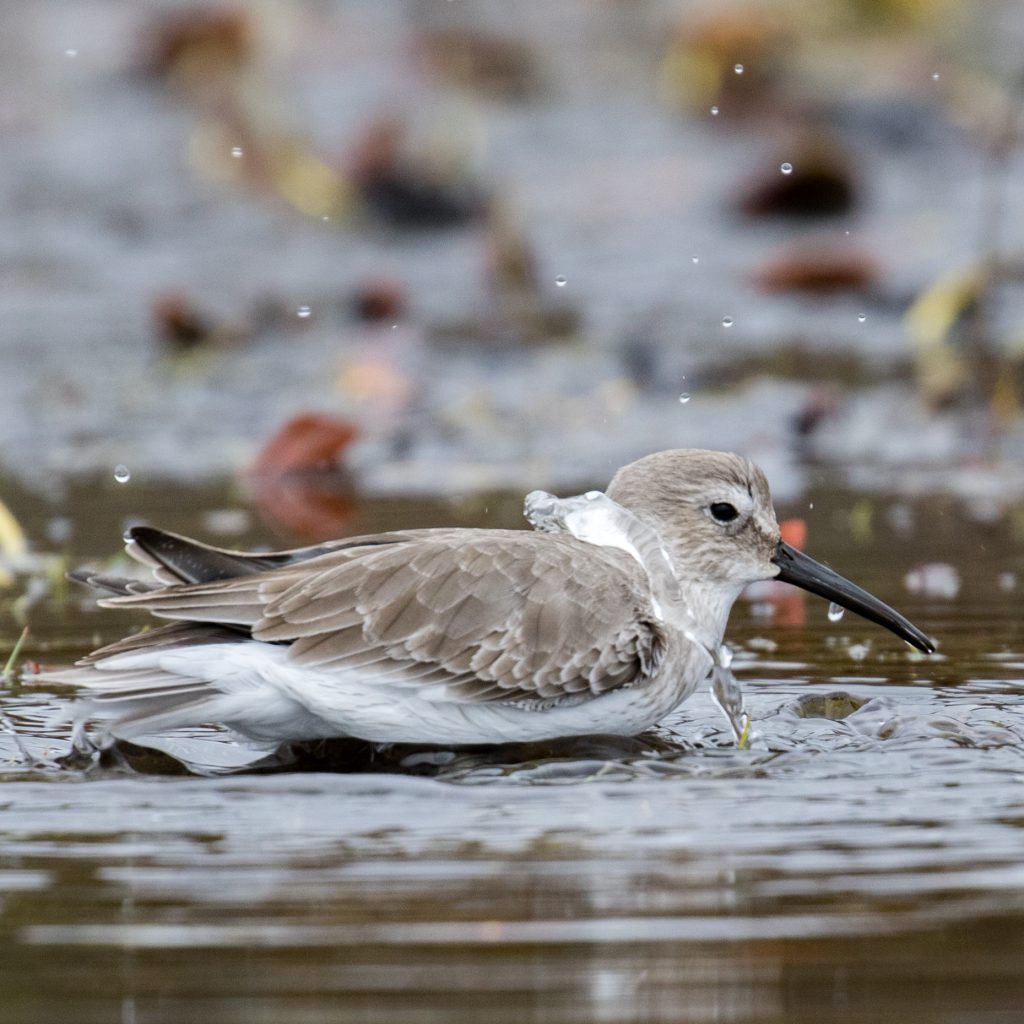 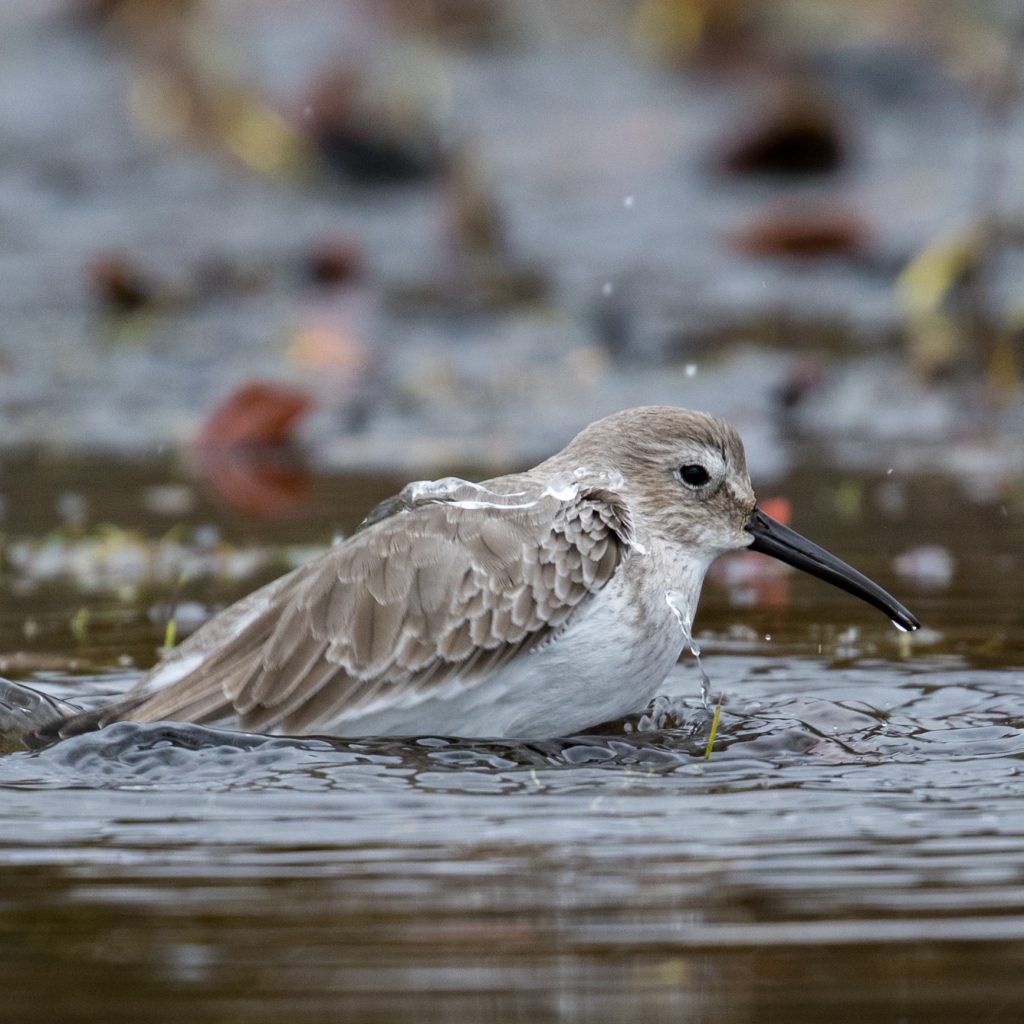 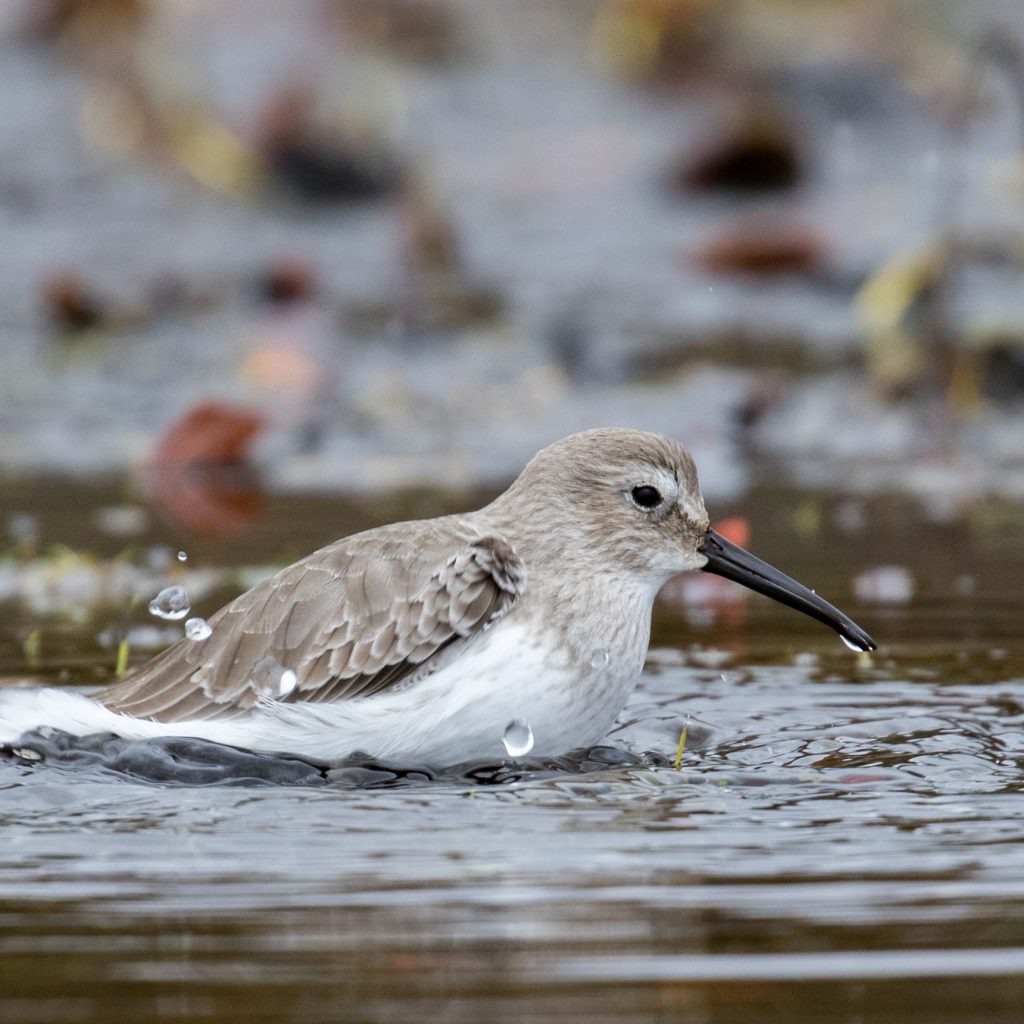 I would venture to say that See Life Paulagics‘ November 4th trip out of Brooklyn was not among their most productive in terms of seeing target birds. Unfortunately, it just comes with the territory. In spite of doing all the right things to find and attract birds, some days are just going to be  better than others. Of the target species listed for the trip (Red Phalarope, Manx, Cory’s and Great Shearwaters, Northern Fulmar, Pomarine Jaeger, and  Great Skua), we only saw Manx and Great Shearwaters. We did have all the expected gulls, scoters, and many Northern Gannets in every type of plumage you can imagine (they put on a real show, see below). Other good birds included: Black-legged Kittiwake (3-4), Lesser Black-backed Gull (3), Parasitic Jaeger (3), Bonaparte’s Gull (35+), and what I believe they eventually identified as Wilson’s Storm-Petrel (1 or 2). The Wilson’s Storm-Petrel was apparently a good find; they should have left the area by this time of year.

One of the more interesting things about the trip was the unbelievably large number of passerines we saw out there. By my count, we had at least 13 species of songbirds: Dark-eyed Junco, Purple Finch, Marsh Wren, Winter Wren, Brown-headed Cowbird, Red-winged Blackbird, Red-breasted Nuthatch, American Goldfinch, American Robin, Golden-crowned Kinglet, Yellow-rumped Warbler, White-throated Sparrow, and Pine Siskin! Add to that two bats! Apparently Saturday’s strong west winds blew many birds off course. The Paulagics crew came prepared for it, however. They brought two potted plants, some loose brush cuttings, plenty of bird seed, and water dishes. Some of the songbirds landed on the boat for a rest and to hopefully refuel. Unfortunately, others seemed too intimidated by all the humans on-board and would not land, or if they did it was only briefly. The Dark-eyed Junco made itself at home on the boat. When it landed, it was in dire straits. But after getting some water and food it was up and about, always under foot so you had to be very careful not to step on it. A Brown-headed Cowbird joined it; they both stayed for the duration, only flying once we were on land again. For me, it was sad to see these passerines out of their element and in potential peril, but it was also sweet to be able to help a few of them.

Later in the afternoon, we came across a large group of Northern Gannets actively feeding. It was pretty incredible to watch them diving repeatedly into one relatively small area. Then, the first whale appeared and then the Common Dolphins became apparent. In all there were two Humpback Whales and who-knows-how-many Common Dolphins. The dolphins were curious and spent much time swimming alongside the boat. It was a pretty incredible show to watch, but one that I found difficult to photograph. Part of my problem is that I didn’t know where to look – there was so much going on all around the boat. I tried to document it for a bit, but then stopped and just enjoyed the show. In my opinion, between the gannets and the cetaceans, this show saved the pelagic. As expected, the trip offered plenty of photo ops, so enjoy the pics. 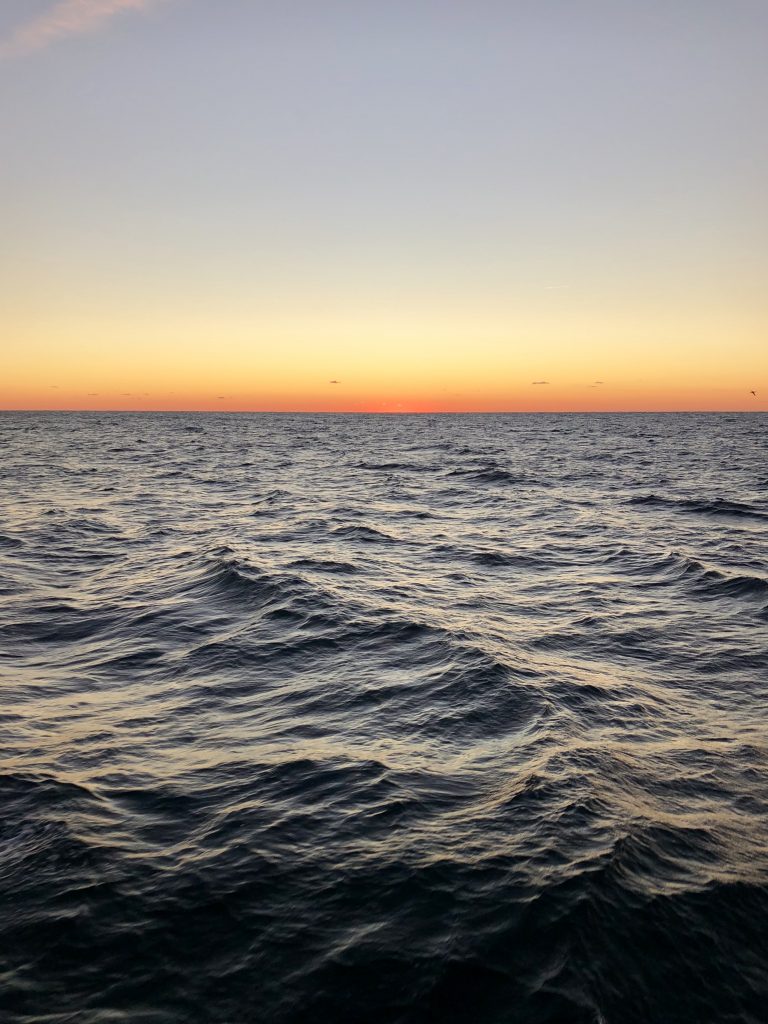 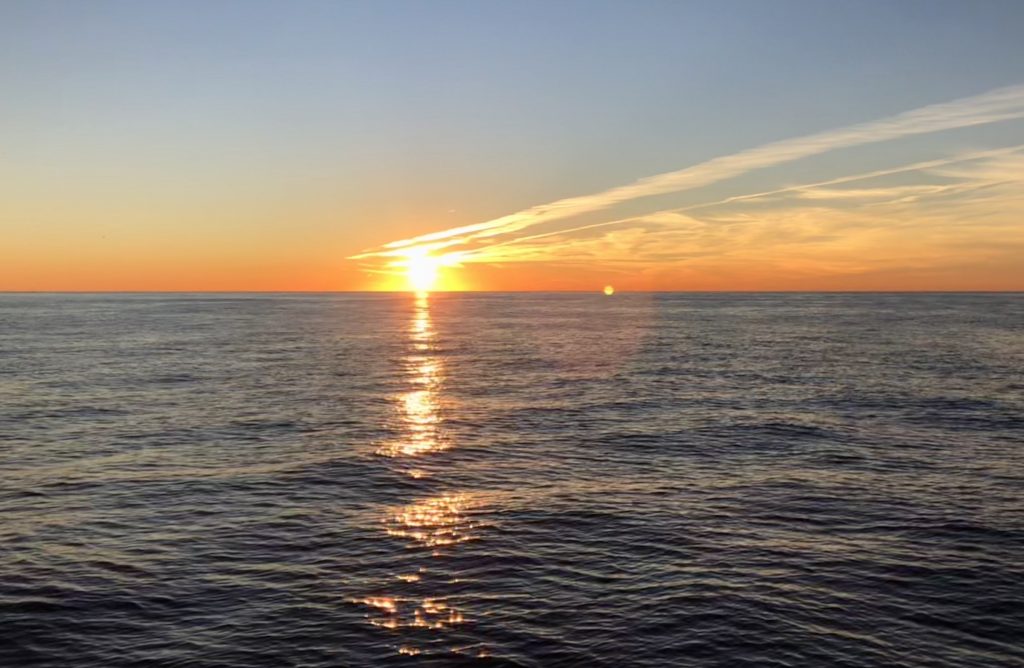 It’s going to take me a couple of days to go through and edit my photos from yesterday’s pelagic trip to the Huson Canyon, out of Brooklyn, NY. The trip proved to be interesting in ways I don’t think most of you would imagine, so stay tuned, I should post in the next few days. Meanwhile, with perfect timing, Bill Fiero has contributed yet another excellent post. I personally can’t get over how beautiful the Eastern Cattle Egret in breeding plumage is – great shot Bill and thanks for the post. -Matt

A Word About Cattle Egrets – By Bill Fiero

Cattle Egrets have undergone an extremely rapid and wide ranging expansion in the last century or so; originally found in tropical and subtropical Africa and Asia, at the end of the 19th century it was found in Souther Africa, and now occurs virtually worldwide, first being observed in North America in 1941.

The Eastern and Western populations have been recently split by some taxonomic systems as ‘Western” (Bubulcus ibis) and ‘Eastern’ (Bubulcus coromandus). They are very similar in appearance, but different enough to be considered separate species.

Here are pictures of both; the now famous ‘Western’ Cattle Egret found by  Matt at the Liberty Loop, and the ‘Eastern’ species that I took in Sri Lanka; both are shown in non-breeding plumage. At the top of the page is a shot of the Eastern species in breeding plumage.

It’s hard to believe that today was my last day as counter for the 2018 hawkwatch season at Mount Peter Hawkwatch. I was scheduled to count next Saturday, but I will be out of town so Rick Hansen is covering for me. The morning rain caused a 2 hour delay to the start, and when I got up on the mountain it quickly became clear that it was going to be a cold and windy day. I had most of my 38 migrating raptors in the first 2 hours, and then things slowed down after that. Raptor highlights included 2 migrating Bald Eagles, one adult and one immature, as well as a nice adult Red-shouldered Hawk. The real highlight of the day, however, came when Bobby Linguanti and some of his family stopped up for a visit. Today is a year since Carol (Bobby’s wife, hawk counter extraordinaire, and all around awesome person) passed away, and they were making the rounds to some of Carol’s favorite spots. It was a sweet and sad visit. As usual, I’ve included my Hawkcount.org report at the bottom of this post.

PELAGIC TEASER: Tomorrow I’m heading out on an 18 hour pelagic trip with See Life Paulagics, out of Brooklyn, NY. Hopefully it will be a good one, our target species include: Red Phalarope, Manx, Cory’s and Great Shearwaters, Northern Fulmar, Pomarine Jaeger, and the holy grail for this time of year Great Skua. 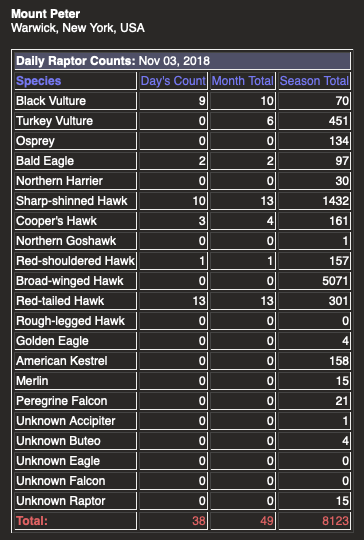 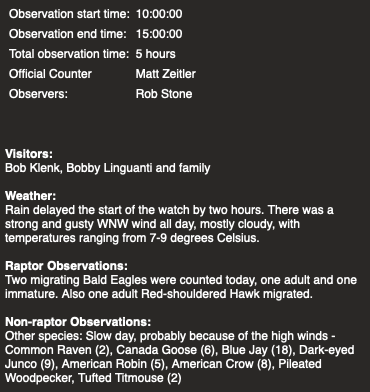