I’m four for four this season at Mt. Peter Hawkwatch. Today was yet another good day up on the mountain, with a good flight that consisted mostly of Sharp-shinned Hawks and Broad-winged Hawks, but also had a good variety of migrating raptors, including:  3 Osprey, 4 Bald Eagles, a couple Red-shouldered Hawks, 3 Red-tailed Hawks, 6 Cooper’s Hawks, 6 American Kestrels, and my first Northern Harrier of the season. For me, the best part of the day was when I located 2 distant Bald Eagles in my scope over the valley. The birds worked their way closer to the platform and were eventually joined by 3 more adult Bald Eagles! We were all pretty excited, thinking all or some of them would head south and be counted as a migrant, but alas, they all eventually headed north. An immature Bald Eagle saved the day, just as the last adult headed north, it streamed through and migrated south.

Once again, the day was all about teamwork; I had several visitors that helped  locate and identify many of the migrating raptors. Thanks so much to Marty Hayes, Jeanne Cimonelli, Judy Cinquina, Karen Miller, Jeff Zahn, Fred Schneider, and Bob Klink. I’ve included my Hawkcount.org report at the bottom of this post. 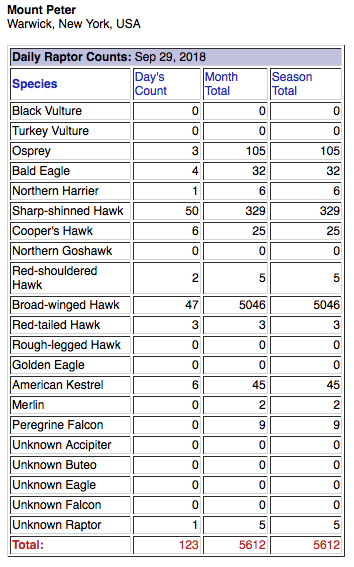 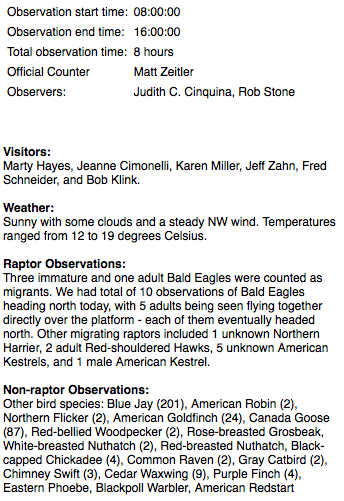 It was an excellent flight at Mt. Peter Hawkwatch today. With the help of several visitors and fellow counters Tom Millard, Ken Witkowski, and Rick Hansen, we were able to tally 1,307 migrating raptors for the day. I thought I might have a decent day, maybe even a good day, but this number surpassed my expectations for sure. Highlights included 1,257 Broad-winged Hawks, which flew over mostly in smaller kettles and were not too high up, so we got some decent looks and finding/counting them was not as difficult as it can be. Seven Osprey passed through, and we also a decent Sharp-shinned Hawk flight, with 32 birds. Non-raptor highlights included an impressive Blue Jay flight, that I estimate totaled 600+ birds easily. It may have been closer to 1,000. If we hadn’t been so busy with the raptors, it would have been nice to get an accurate count. Also, probably my favorite bird of the day, Rob Stone and I had COMMON LOON in flight, heading WNW, I’m not sure where that bird was going to or coming from. As usual, I’ve included my Hawkcount.org report at the bottom of this post. 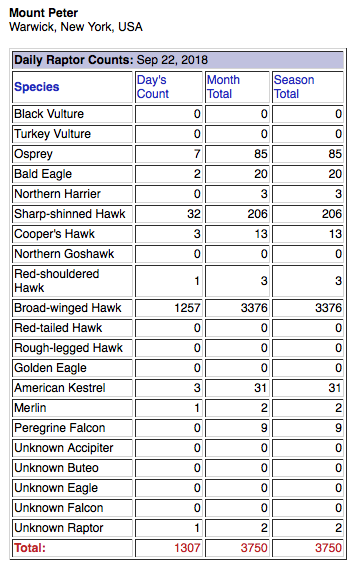 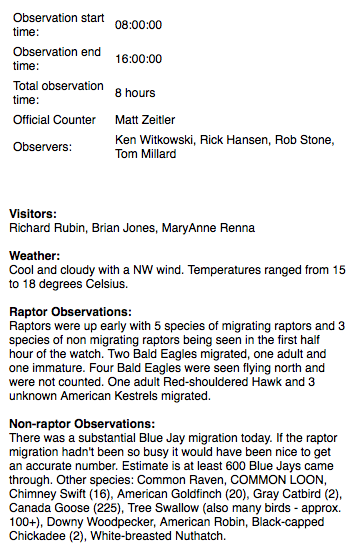 QUICK POST: Busy day here, so just putting together some recent photos, most from this weekend, all from within the last week. I just realized as I was writing this that all were taken at Wallkill River National Wildlife Refuge, either at the Liberty Loop or at Winding Waters Trail.

On a day like today, when I had plenty of help up at Mount Peter Hawkwatch, I wonder how many birds I would have missed if I was on my own. Tom Millard, Denise Farrel, Rick Hansen, Linda Scrima, and Ken Witkowski all put in some serious time at the hawkwatch today and helped me tally 331 migrating raptors. But, on this day, I got some help from another source on the ground. Just before 3 o’clock I received a text from Rob Stone saying he had a kettle of Broad-winged Hawks over the prison in Warwick. At that point, it was just Denise and I at the watch – we scanned like mad to try and find Rob’s hawks and for what seemed like ages, we had no luck. But then I thought I had a distant bird in my binoculars, but it was so distant that it just disappeared. I got on the same area with my scope, and voila! Rob’s kettle of Broad-winged Hawks (104 birds!). Teamwork can go a long way on a hawkwatch, but I’ve never experienced it to this extent!

So, with 331 migrating raptors, suffice to say it was a good day with some excellent highlights. For migrants, we had 6 Bald Eagles, 9 Osprey, 5 American Kestrels, 297 Broad-winged Hawks (oh so close to 300!), and our first Merlin of the season. As for passerines, at least 2 RED-BREASTED NUTHATCHES were around for most of the day, and the best bird of the day was a YELLOW-BELLIED FLYCATCHER found by Rick Hansen. Unfortunately the bird was not entirely cooperative, giving us only fleeting looks and no photo ops. Later in the day, Denise and I didn’t see the bird again, but heard it calling not too far away, just behind the platform. I was excited as it was an Orange County life bird for me and also my 210th bird in OC for 2018.

Broad-winged Hawks should be coming through in large numbers this week, so if you get a chance it’s a great time to visit Mount Peter. We have counters there every day starting at 9:00 am and going until the birds stop flying. And we always appreciate the extra eyes. 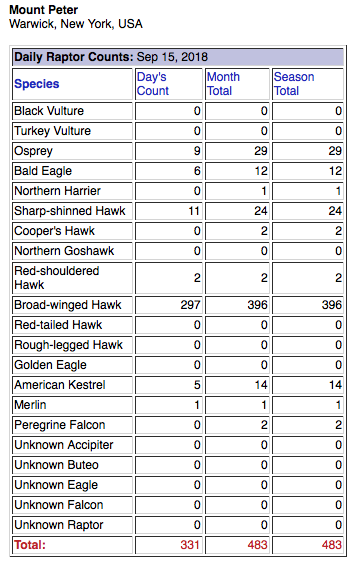 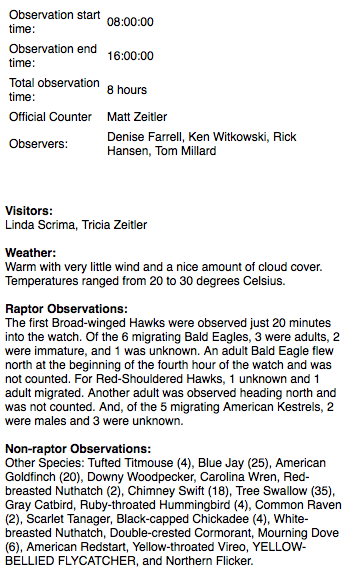 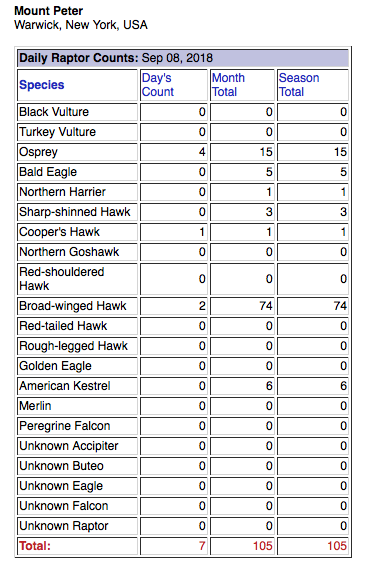 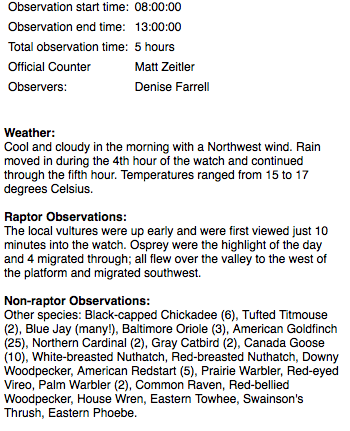 When I saw John Haas’ report this morning that he had a BAIRD’S SANDPIPER at Apollo Plaza, I knew there was a good chance I’d be heading to Sullivan County after work. While it’s been an excellent year for me with shorebirds in Orange County, photo ops have been very few. So, with that in mind, I raced towards Apollo Plaza after work and luckily the bird was still present. At first I didn’t think I would get any photos because the BASA was staying mostly hidden in the grasses, but eventually the bird worked its way out and into the open. What a difference from see them a couple hundred yards out like we have been in the black dirt! What a beautiful bird; huge thanks to John for posting and to Patrick Dechon, who originally located the bird on Monday. 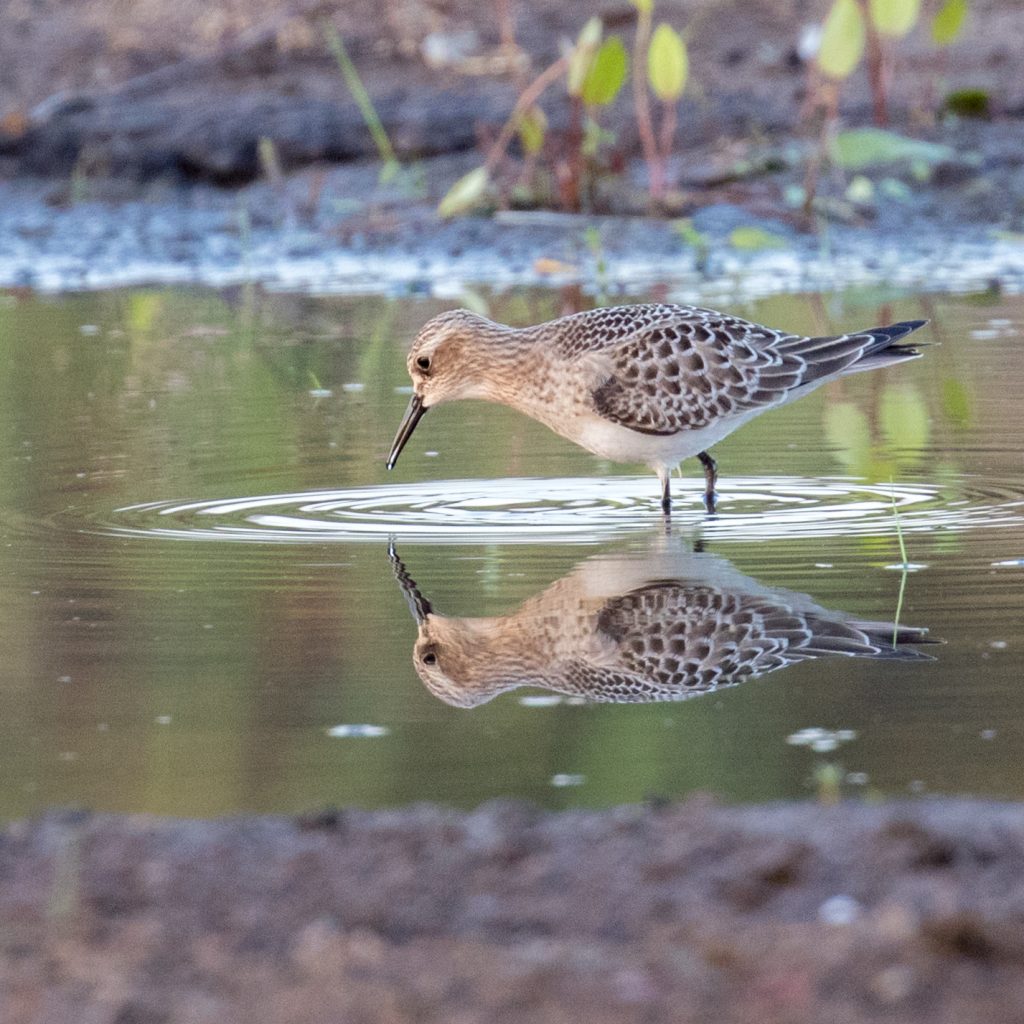 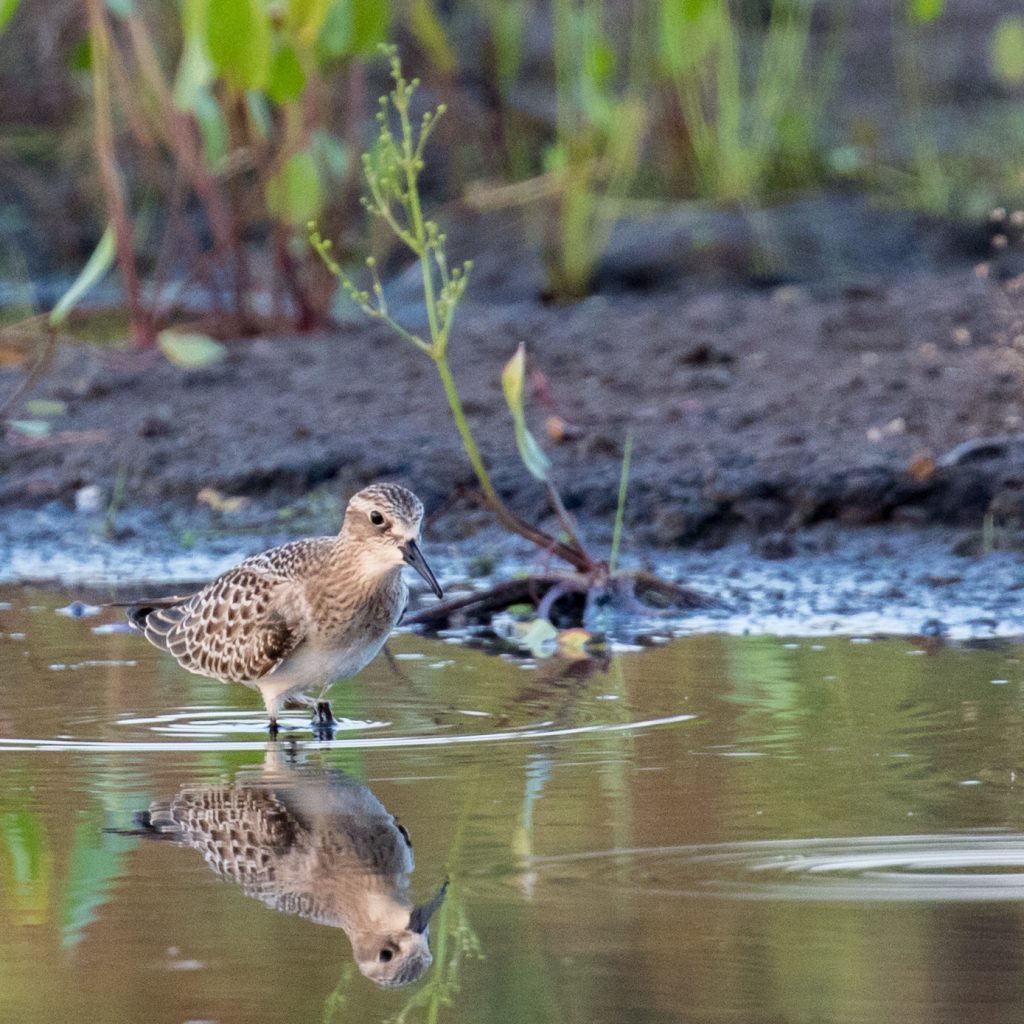 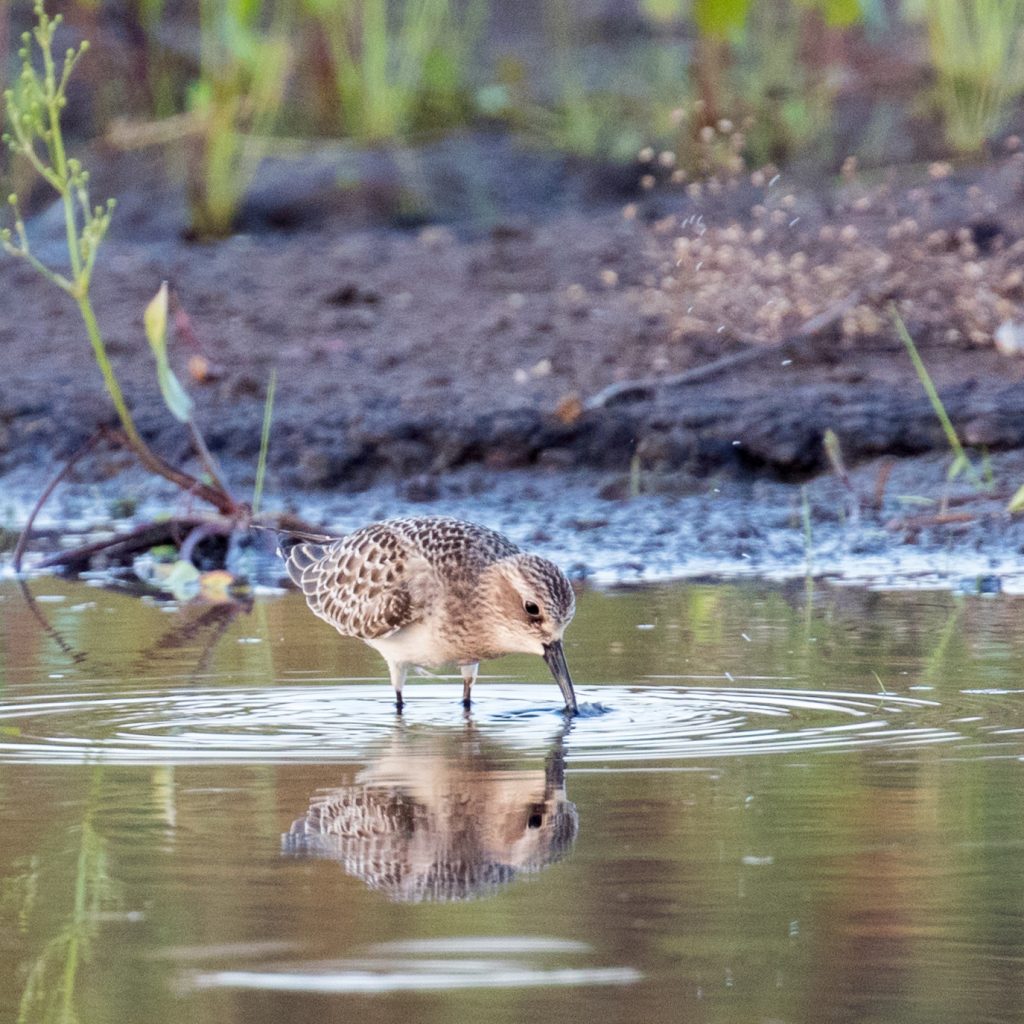 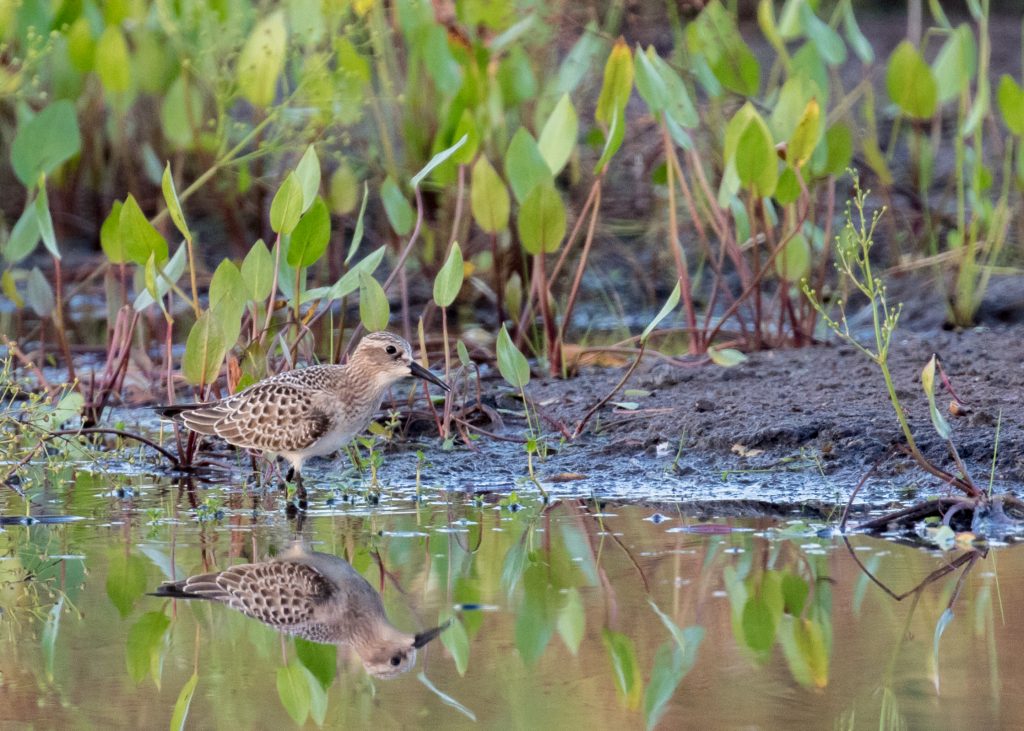 Over the weekend, I was lucky enough to catch up with the two SANDHILL CRANES  that have been spending some time in our area. Not only that, I watched from my car as the two birds interacted for approximately 5 minutes. They were very vocal while this was going on; you can see in nearly every photo, one or both of their bills are open. I did some research on the internet and found out that SACRs mate for life, choosing their partners based on dancing displays. But, the timing doesn’t seem right for this, so I kept looking and found a passage on the National Geographic website that indicated that they “also dance, run, leap high in the air and otherwise cavort around—not only during mating but all year long”.  It was awesome to see it; here are a number of photos from that five minutes. 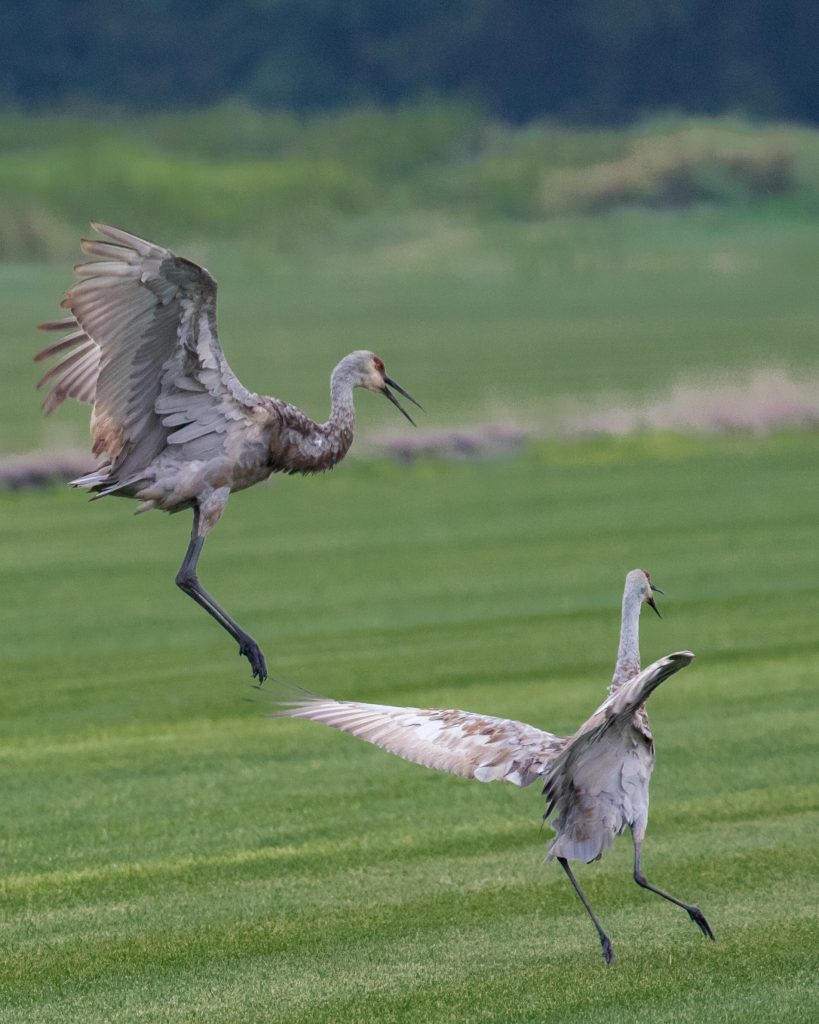 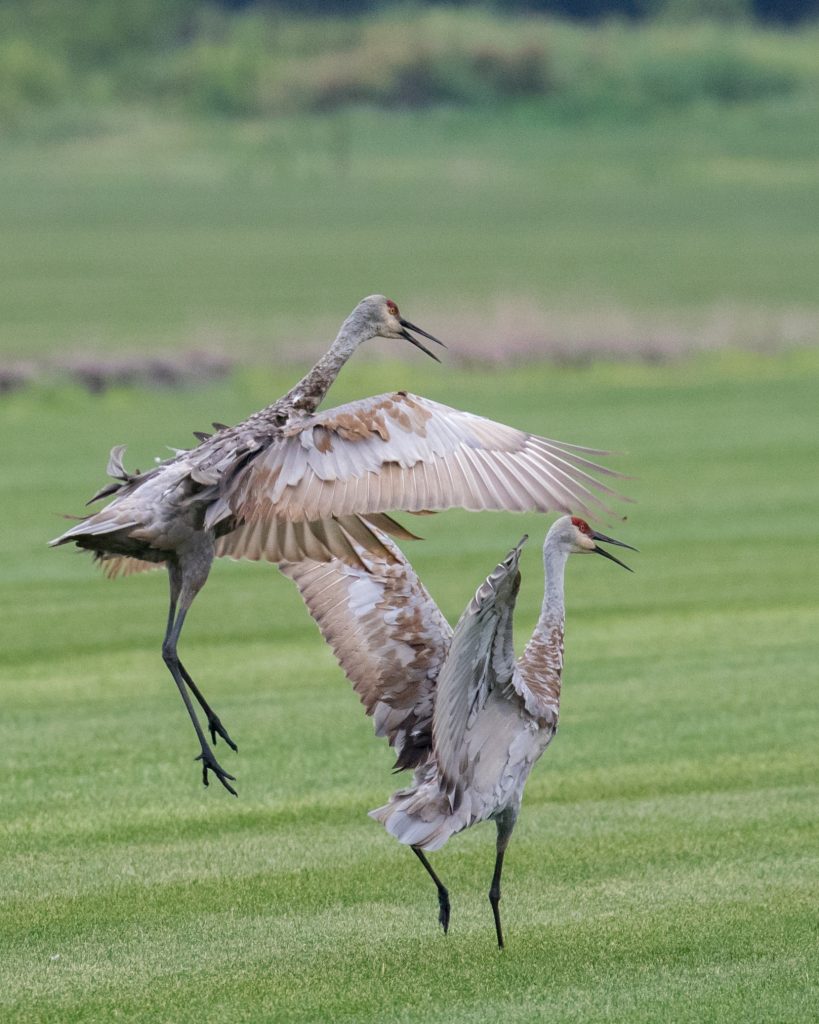 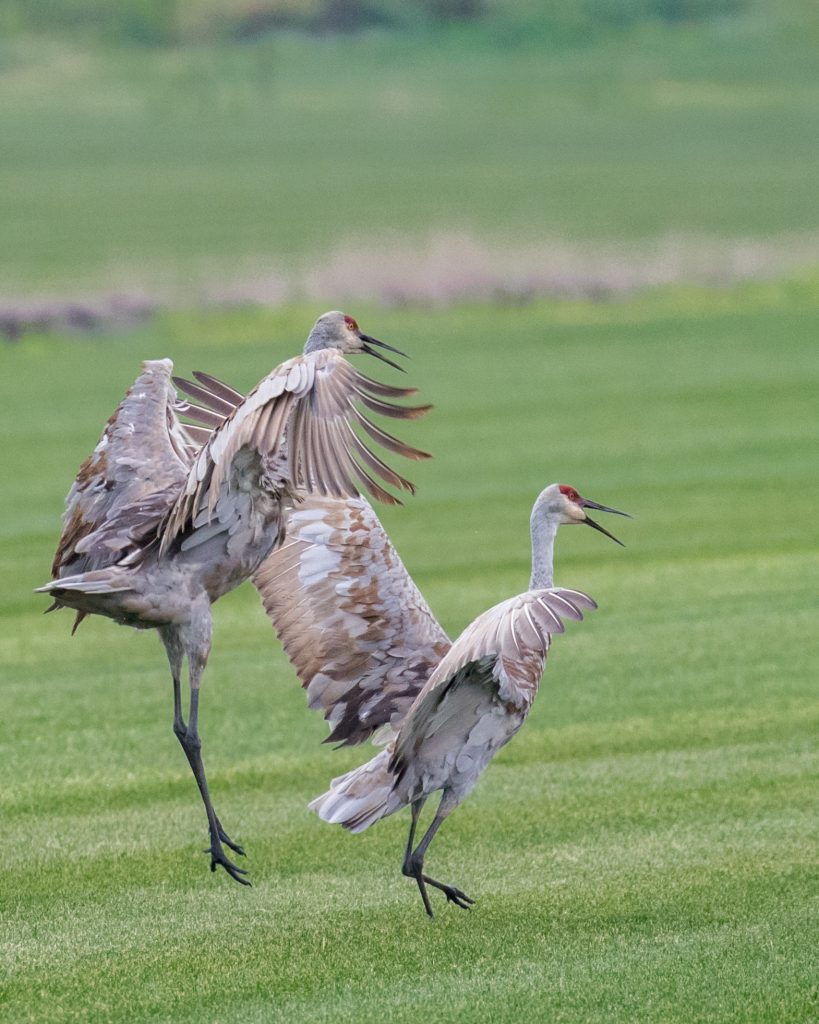 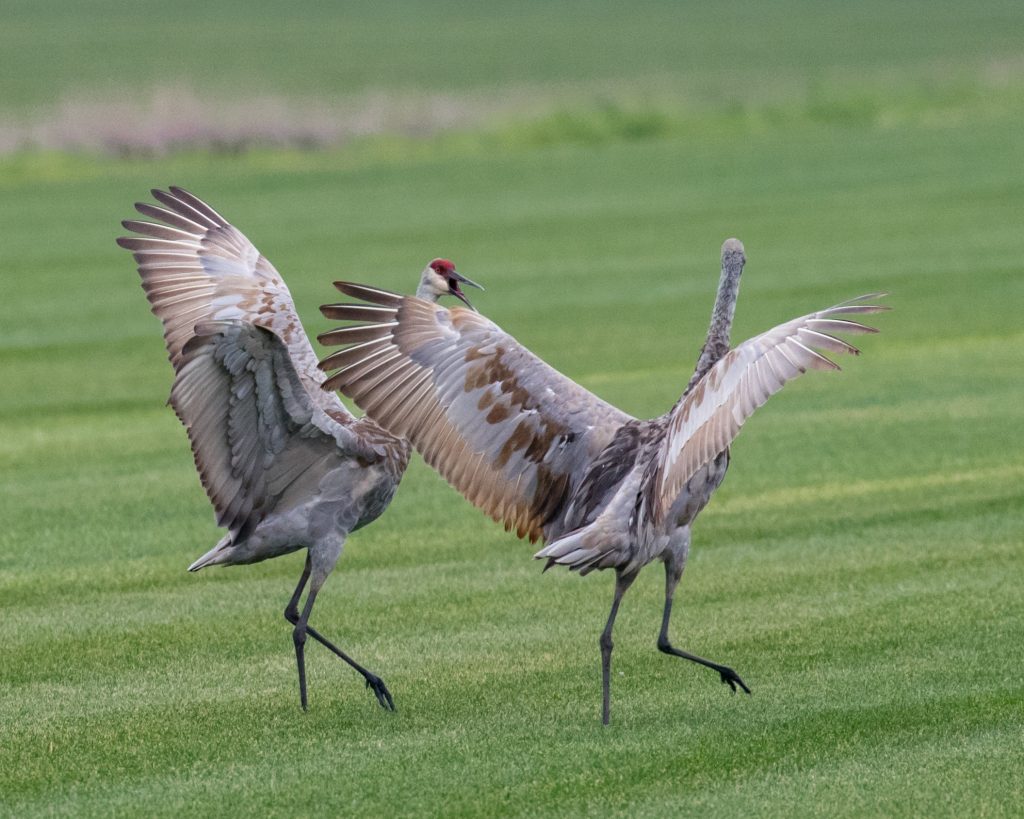 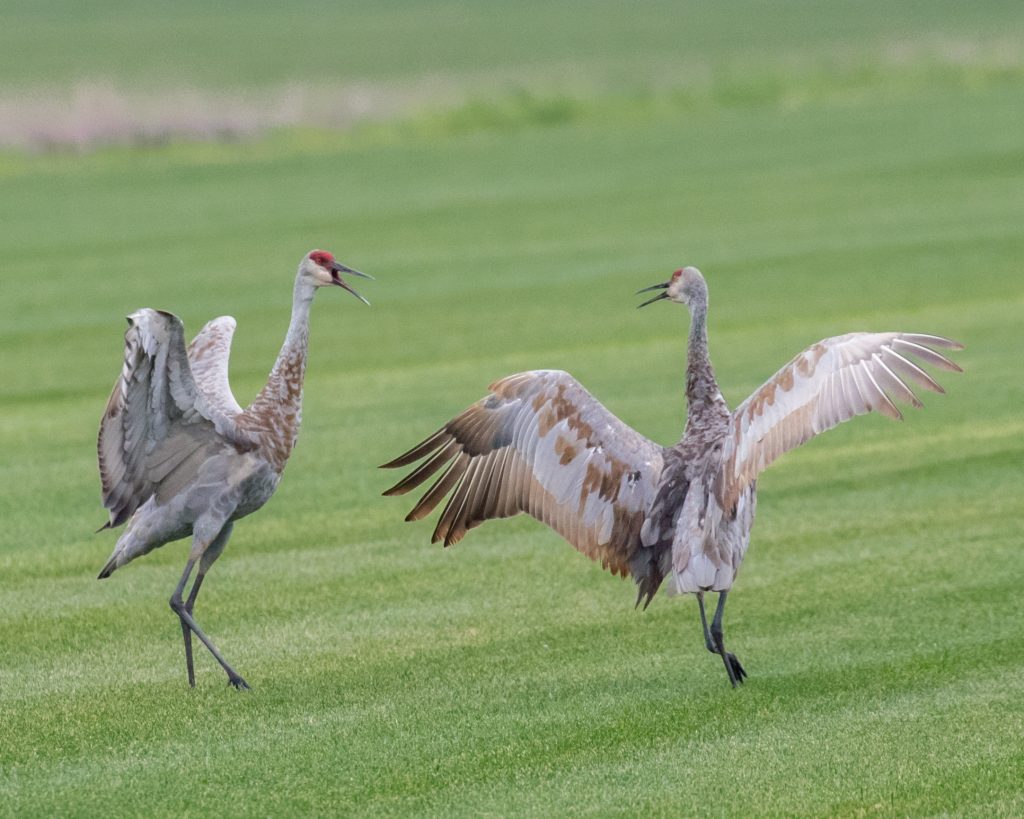 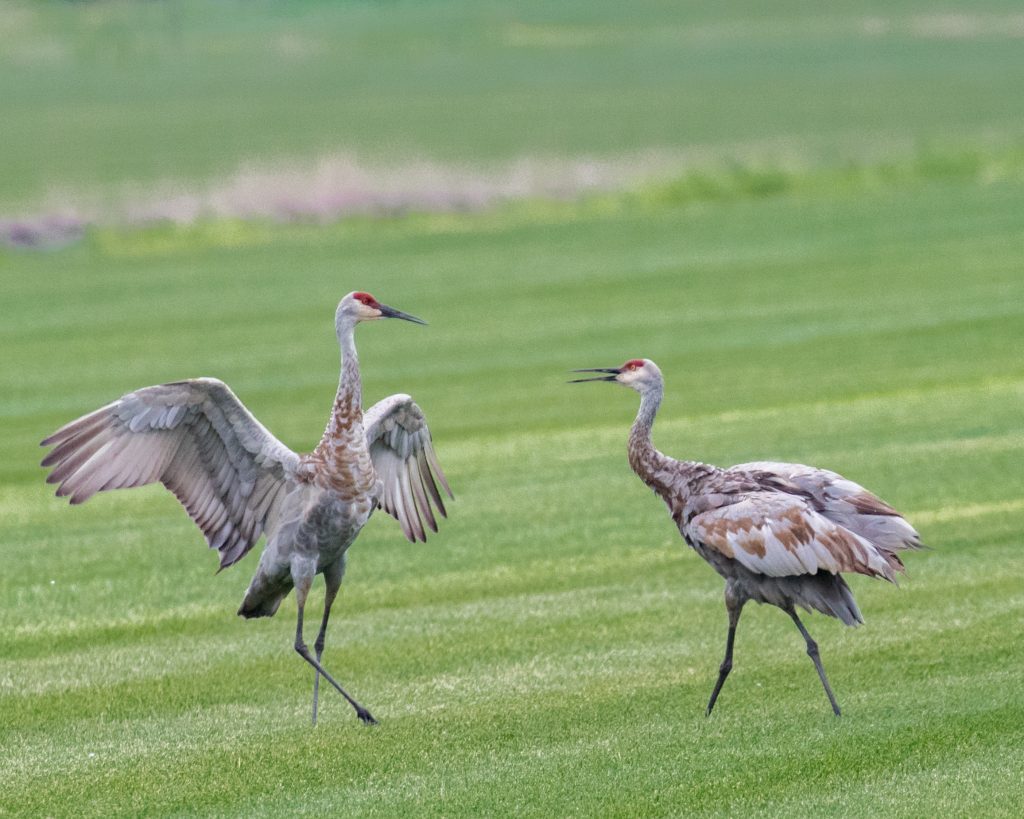 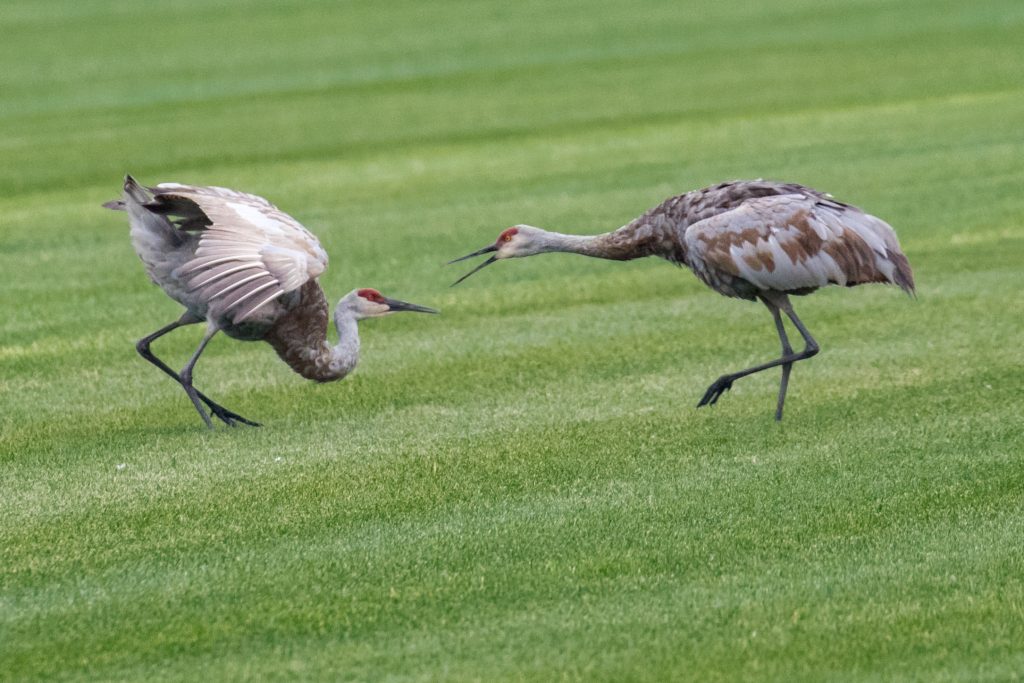 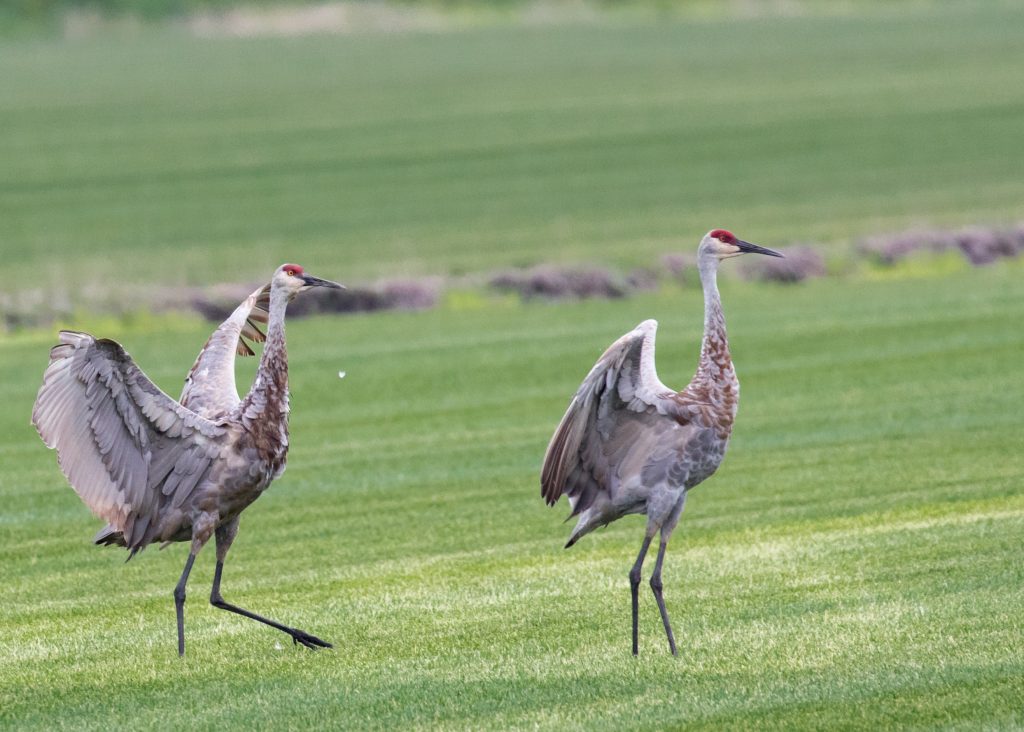 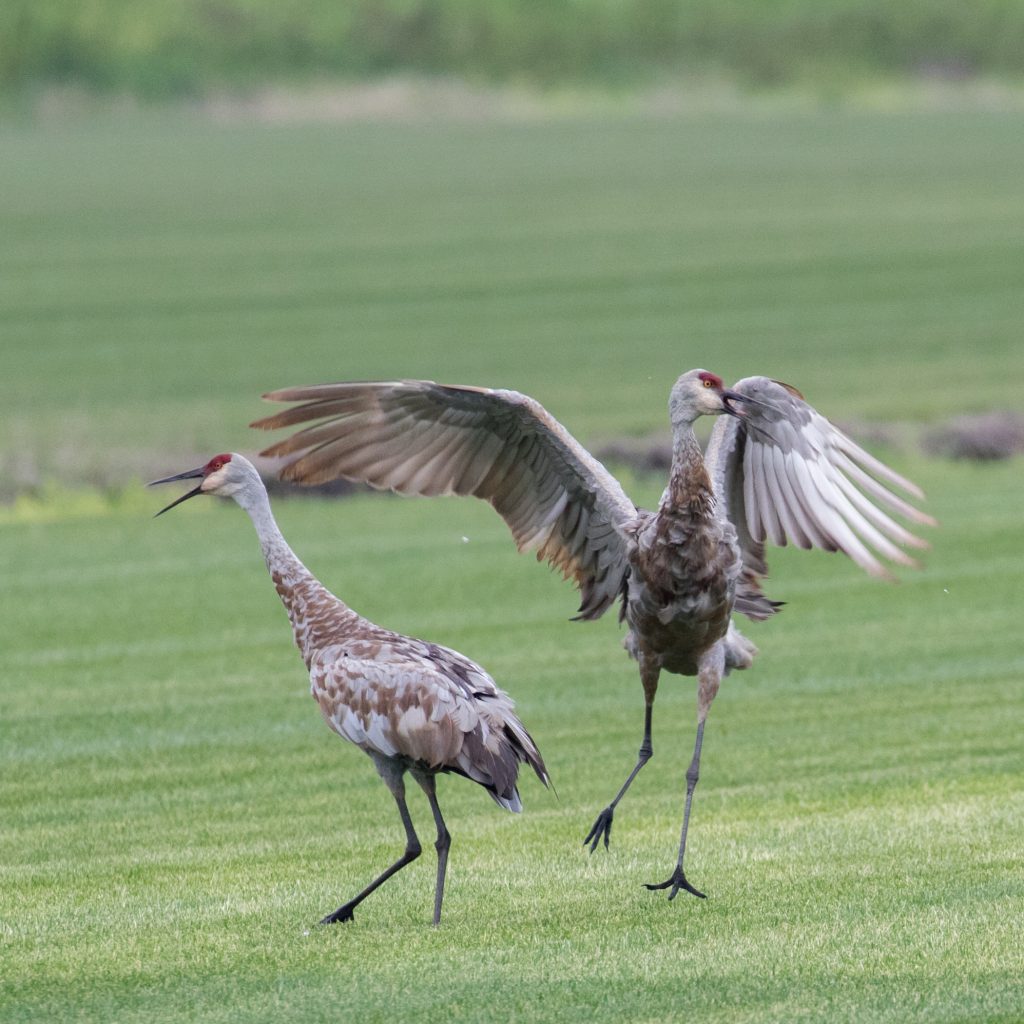 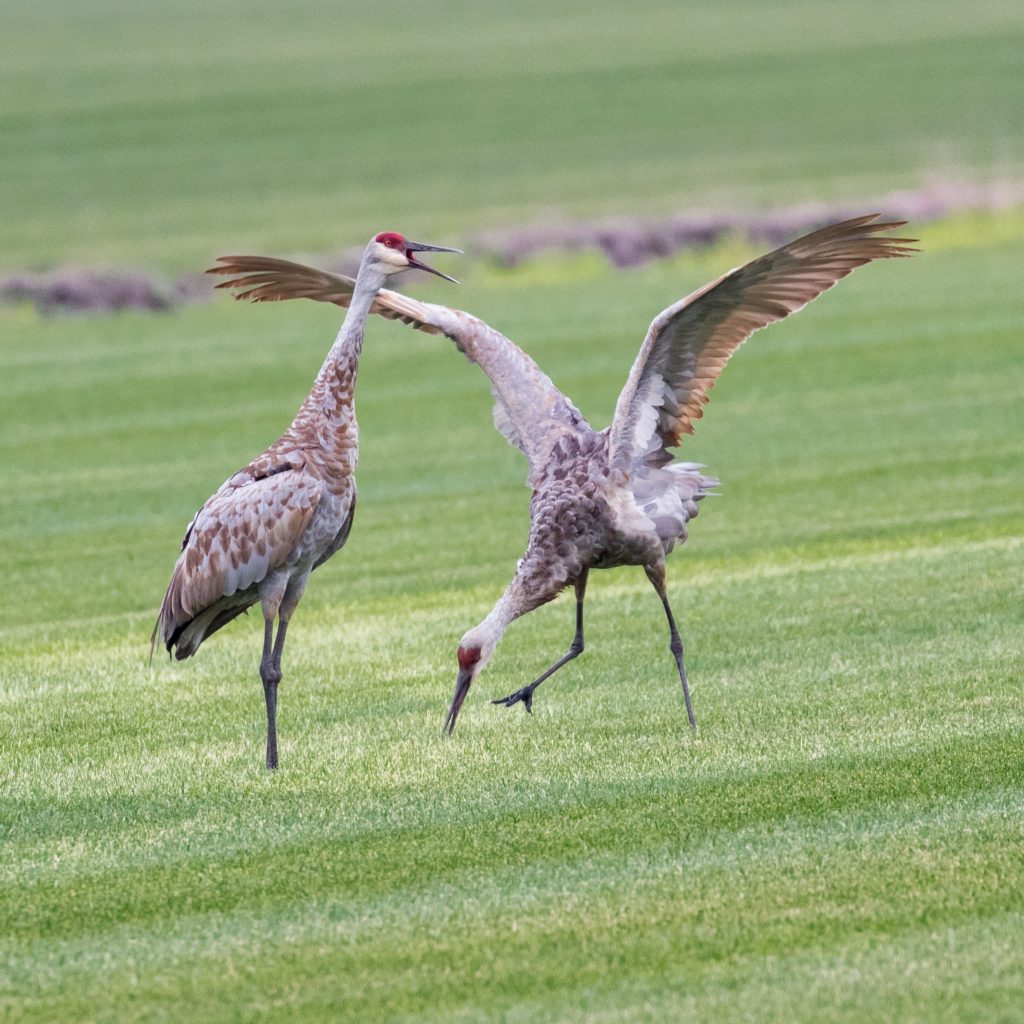 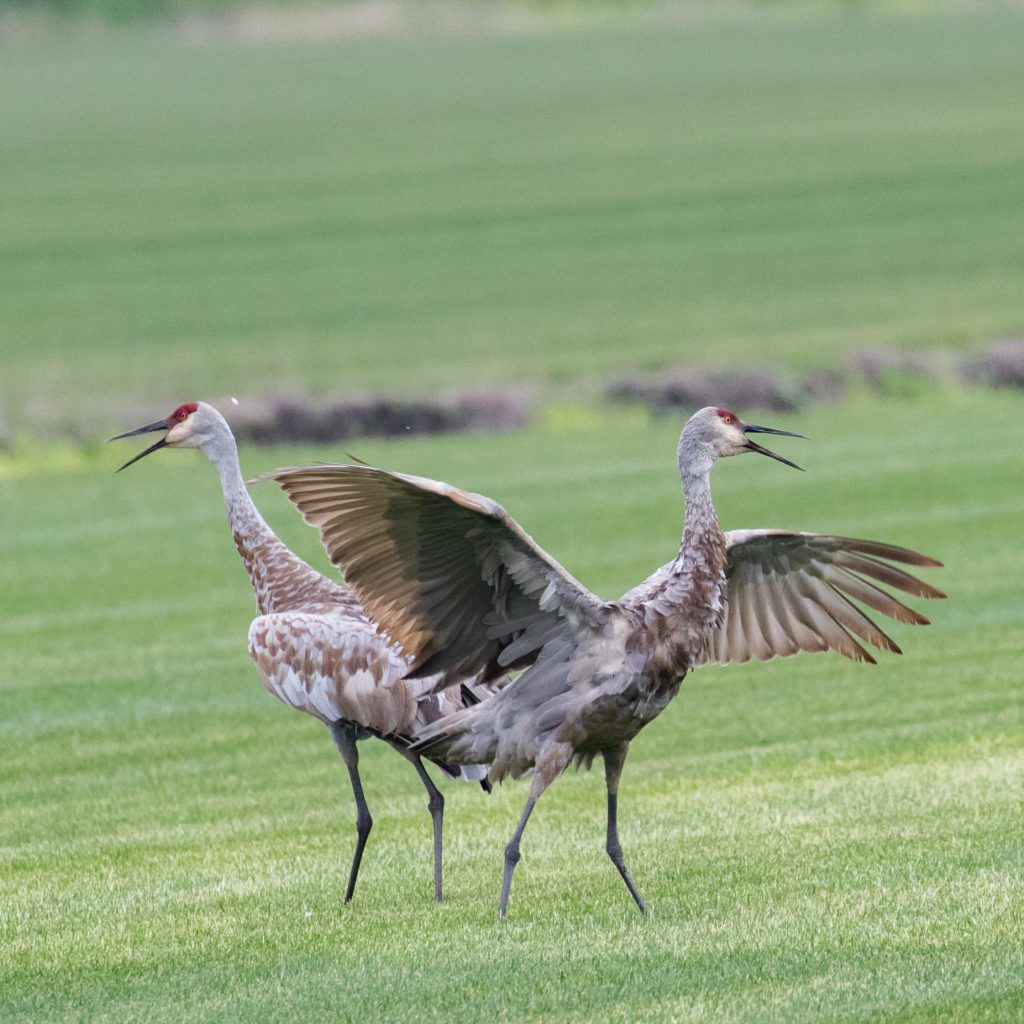 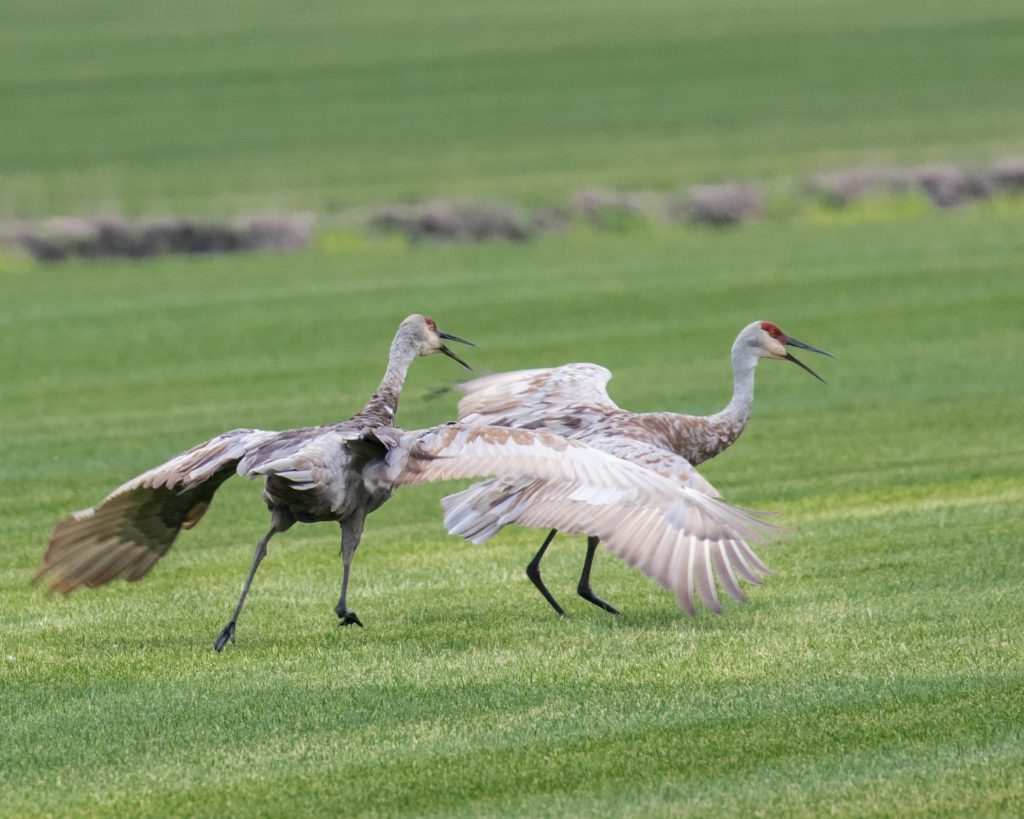 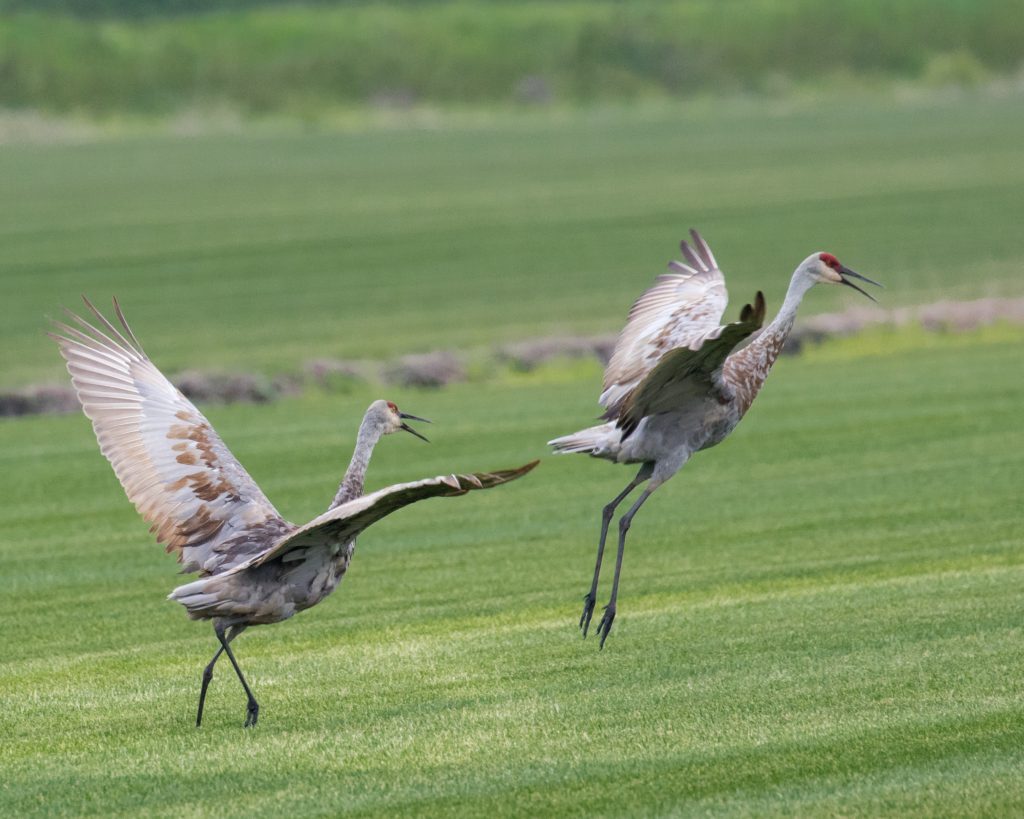 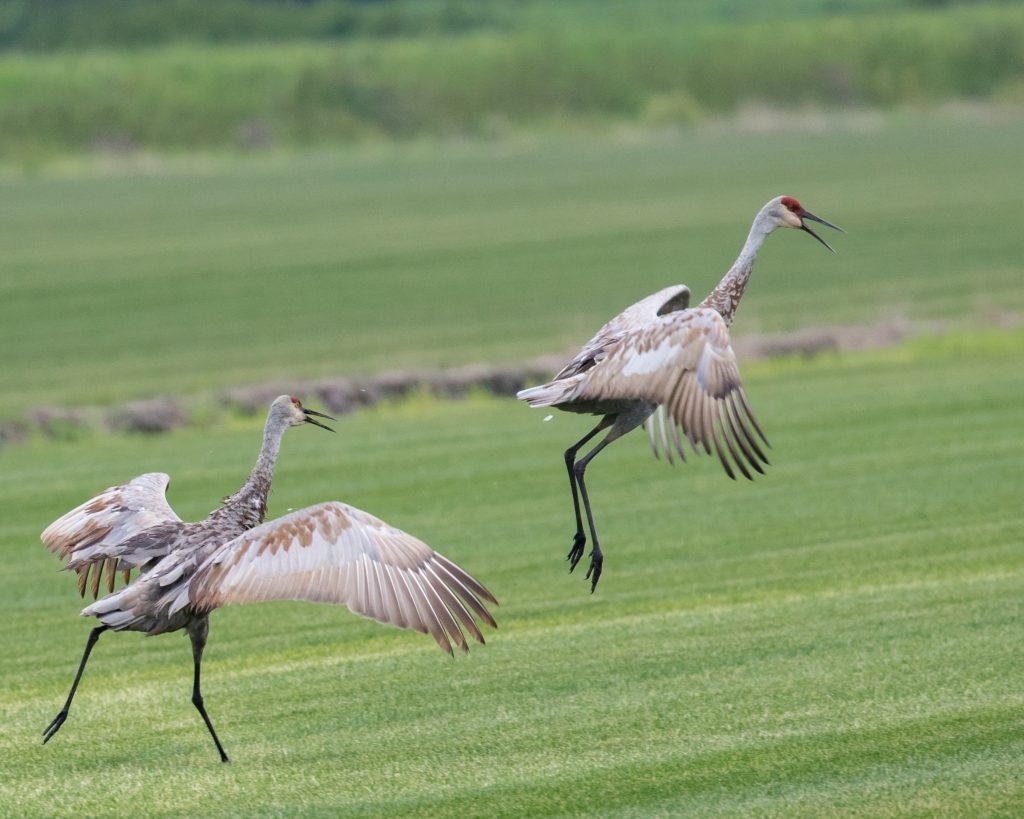 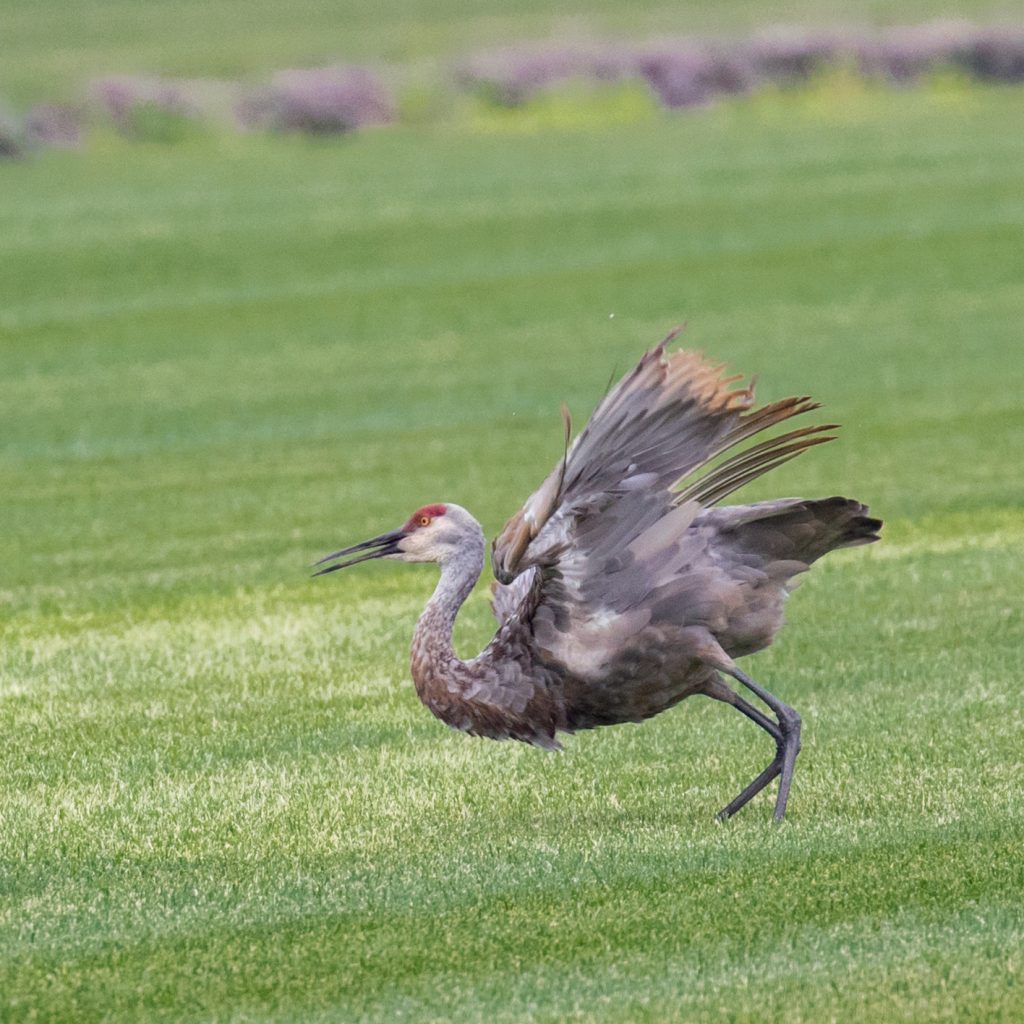 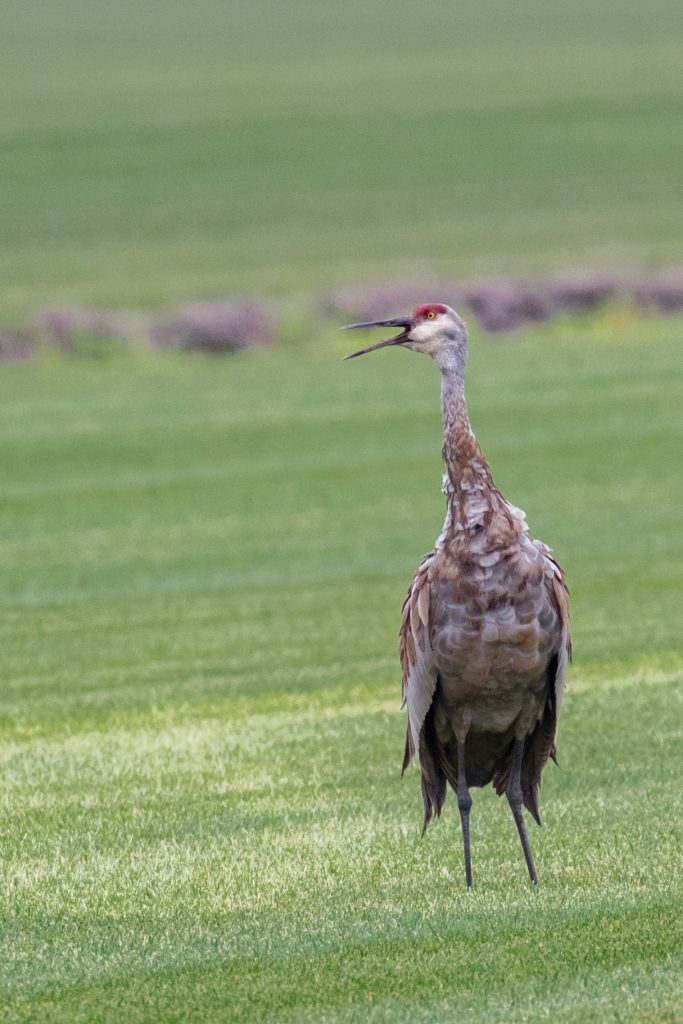 I can hardly believe that it is time for hawkwatch already – this summer just flew by. Today was the first day of my 7th season counting at Mount Peter Hawkwatch, and I believe this is the first time I’ve counted on opening day – September 01. My expectations were low, mostly because it’s so early in the season, and also because the winds were not entirely favorable – I had an East and East Southeast wind throughout the day. After no raptor movement at all for the first two and and a half hours, I was pleasantly surprised to have a good couple of hours with a total of 15 migrating hawks (13 Broad-winged Hawks and 2 Sharp-shinned Hawks).  Other highlights included a pair of RED-BREASTED NUTHATCHES that were hanging around for most of the day and a brief appearance of a CAPE MAY WARBLER.  I thought it was a pretty darn good start to the season, and I’m totally looking forward to an autumn full of Saturdays up on Mount Pete. You can see my complete report at the bottom of this post. 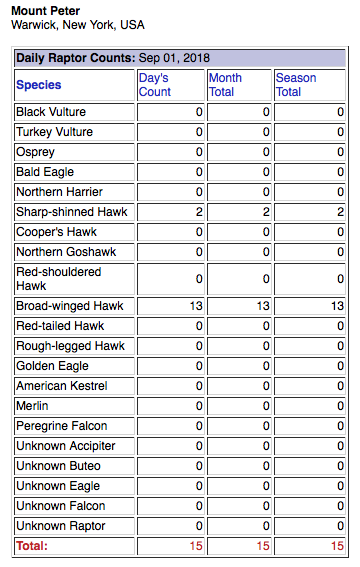 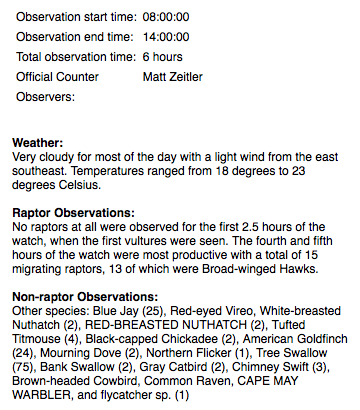