I got lucky again tonight and enjoyed observing the beautiful Snowy Owl seen above. What a great way to end the work week.

I spent the evening at Wallkill River NWR, the light was really nice and I was hoping to get some hawk photos or that maybe the Short-eared Owls would get up early. Neither of those happened, but there was a steady stream of Canada Geese flying over, so I was checking them out, wishing for a Barnacle or Greater White-fronted Goose. Instead, I saw a smaller goose and took several shots. To me this looks like it is good for a Cackling Goose, mostly because of the small stubby bill and the small squarish head. Please comment if you have thoughts on this ID.

The past two evenings after work, I made my way out to the Black Dirt Region hoping to relocate one of the Snowy Owls that has been seen out there. I was successful on both nights and was rewarded with distant but extended views of the bird. It is very enjoyable for me to watch from such a great distance – I can spend some time watching the bird’s behavior and there is no risk of bothering the bird. I can still snap a few distant photos, and sitting in my car, I can entertain the thought that the bird might decide to come a little closer for better looks and photos. This, of course, didn’t happen (this time!), but I like the idea that it might.

Meanwhile, I think I can now identify Snow Buntings by ear. While looking through my binoculars at the Snowy, I heard some birds passing overhead and I immediately thought they sounded like Snow Buntings. My suspicions were confirmed when the flock landed not too far from my car, revealing approximately 15 Horned Larks and 10 Snow Buntings.

Tricia’s sister and her family came up for a visit this weekend. For me, luckily, that means birding with my future brother-in-law Bill. Over Christmas, he took me out on Long Island and we had a great day of birding, highlighted by 2 Snowy Owls on Dune Road, so I wanted to return the favor. I had two target birds for the weekend: Bald Eagles and Short-eared Owls.

Saturday morning we headed over to Newburgh, hoping for Bald Eagles on the Hudson. The river was nearly entirely frozen over, and there were no eagles to be seen. I called my fellow Mt. Peter Hawk Watch counter, Carol Linguanti, and she directed us to head further south, past the Bear Mountain Bridge. We worked our way south, stopping several times, with our final stop being at Croton Point State Park. We ended up with over 30 Bald Eagles for the day and got our best looks at Charles Point Pier Park, where the birds were close enough for some photos.

In the afternoon we headed back to Orange County in search of Short-eared Owls where Karen Miller joined us. The temperatures were dropping and the snow was falling pretty heavily, but the owls got up early! Cameras, binoculars filled up with snow as we had at least 10 SEOWs, giving really fabulous looks as they flew all around us and over our heads. Fingers and toes were frozen as we enjoyed the Short-eared Owl show.

It was a great day of birding capped of by the fact that Bill got three life birds on the day: Black Vulture (Route 207 north of Goshen), Eastern Meadowlark (Croton Point State Park), and Short-eared Owl (Orange County NY).

**NOTEWORTHY OBSERVATIONS**: In the past week in Orange County, I had Snowy Owl sightings on 1/20, 1/22, and 1/24 (two different owls, one seen twice). It is really great to still have these owls around, it is still so exciting for me to see them every time!

I was fortunate enough to be invited to join what I call “the New Jersey Crew” on an outing this past Sunday to Barnegat Lighthouse State Park. The “crew” includes: Judy Cinquina, Tom Millard, Denis Farrell, B.A. McGrath, Gene Tappan,  and honorary New Jerseyan, Dennis Murphy. I really enjoy birding with these folks because they are all very good and experienced birders that are extremely generous with me, taking the time to teach me the ins and outs of birding, bird identification, and birding locations. Plus they are all just nice people to spend time with.

I cannot express strongly enough what a great birding location Barnegat is. As soon as we got on the beach, until it was time to leave, there was ALWAYS a large number of birds to observe. Additionally, while some of the birds were a bit distant, most birds were quite close and gave great views. It was a super day for photography with so many birds near and far and the light was beautiful. For me, the icing on the cake was the fact that six (!!!) of the over 30 species that we had for the day were life birds: HARLEQUIN DUCK, COMMON EIDER, PURPLE SANDPIPER, ICELAND GULL, CAROLINA CHICKADEE, and BOAT-TAILED GRACKLE.

So I took tons of photos and I was happy with many of them:

After Barnegat Lighthouse State Park, we made a quick stop at the “Bridge to Nowhere”, which is basically small road (Stafford Avenue) that ends in a destroyed bridge. It also borders along the Manahawkin Wildlife Management Area. It was here that I got my life Carolina Chickadee and Boat-tail Grackles.

What a fabulous day of birding, with great company and tons of great birds. Hard to ask for anything more than that. 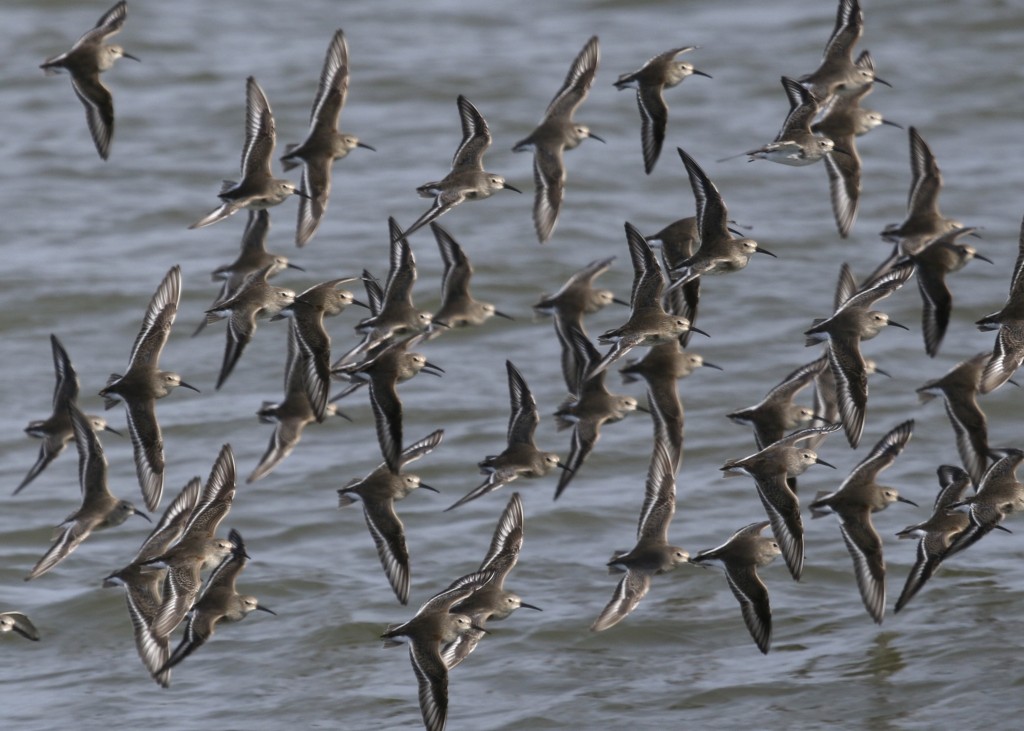 I had an AMAZING day of birding today at Barnegat Lighthouse State Park today. I do not have enough time tonight  for a complete post, but I always try to post on Sunday evenings, so here is one shot from the day. Please check back tomorrow for the full post, it really was an incredible day of birding – tons of photos and six (!!!) life birds!

Huge thanks to Rob Stone once again for alerting me that he had located a SNOWY OWL in the Black Dirt Region today. As far as I know, this is the first Snowy Owl reported in Orange County since early December. Additionally, in the same field, not far away, were 5 TUNDRA SWANS. I saw Ken McDermott while I was there and he told me that Judy Cinquina had seen 21 (!!!) Tundra Swans there earlier in the day. Another great day for birders in Orange County!

I got out of work a little bit early today and took the opportunity to walk the Liberty Loop at the Wallkill River NWR. It was a nice walk around the loop where I had 16 species identified. Highlights included 6 Short-eared Owls being very vocal and putting on quite a show, a Yellow-bellied Sapsucker, and on my way back to the car I had 5 TUNDRA SWANS fly over. The birds were heading south along the west side of the loop. They followed the loop into New Jersey and eventually headed back north, this time on the east side of the loop (which is where I was located), flying right over me, and back into New York State. I could tell from the shape of the head/bill that the birds were not Mute Swans, and I was thinking Tundra. Fortunately one of the birds was calling periodically, which lead me to conclude that they were indeed Tundra Swans.  Of course, I had to listen to the call on my phone app to know this! What a nice surprise on an unplanned trip around the Liberty Loop!

It was a rainy and foggy afternoon in Goshen today. I missed out on the nice weather yesterday because of a work obligation, so I was really itching to get out an do some birding. So, I decided to walk the Heritage Trail at 6 1/2 Station Road Sanctuary to get my fix. I did not get a high number of species, but it was quite birdy with large numbers of the birds I did see. I could hear the Canada Geese flying in over my head in the fog, and there was a congregation of approximately 450 geese on the ice in no time at all. I also had a good number of American Robins, mostly perched in trees well off the trail. The sighting of the day for me was 18 Cedar Waxwings, a bird that I have not seen recently for some reason. Here’s my short but sweet list from the day:

Well, pretty much took the weekend off in terms of birding. Every once in a while, I think I just need to go out and not worry about identifying and counting every bird I see. Instead I just went out and just enjoyed looking for birds and trying to get some decent photos.