Tuesday after work I put in some serious birding time. I started right around 4:00 in the afternoon and I drove home in the dark at around 9:30. I started at the Appalachian Trail Pochuck Creek Section. I wasn’t sure if I would ever go back there because last time there was SO much foot traffic and as a result very few birds. On Tuesday it was very hot and muggy and I was hoping that the heat would keep people off the trail – which it did. I had a productive afternoon where I identified 21 species. I caught a couple glimpses of a Marsh Wren which was pretty exciting and I got a really good look at two Great Egrets that were not very far off the trail. My best moment was finding FOUR Green Herons in the trees and bushes alongside the creek. At one point I had all four herons in my binoculars at one time.

I headed over to the Wallkill River Wildlife Refuge to meet up with Karen Miller around 6:00. Despite the recent rains the water levels were still very low and there were many shore birds present. I struggle with the shore birds, but since  Karen hadn’t arrived yet  I took the opportunity to take out my Sibley guide and try to figure out what birds I was seeing. I used the numerous Killdeer as a gauge for size and also watched their behavior and this is what I came up with: (1) Greater Yellowlegs, (10) Killdeer, (2) Least Sandpipers, (3) Solitary Sandpipers, and (2) Spotted Sandpipers.

Karen arrived and we watched the shore birds for a while and then decided to walk the east side of the trail, the side we always like. We had a great evening of birding – we had 29 species. There were many Great Blue Herons (probably over 40) and they were very active. They were often in flight and many of them were vocalizing. We also talked about the high numbers of Canada Geese and Mallards that were present – many more than I have seen out there lately. A highlight for both of us was seeing an Orchard Oriole (thanks to John Haas for help with the ID).

A final highlight came at the end of the walk. It was getting pretty dark but we could see that there were some bigger birds in the water in front of the viewing platform. Karen asked me if I wanted to see a Green Heron. I wasn’t convinced, but when I looked where she told me there sure was a bird that had the general shape of a Green Heron. It looked too big to me so I started thinking it could be a Black-crowned Night Heron. It was just too dark to make out the bird from where we stood, so we made our way closer – to the viewing platform. Unfortunately, as we were trying to get a look a car pulled up and the bird flew.

I made it back out to the Basha Kill early this morning and I had a little better luck this time around. I identified 25 species including a Pied-billed Grebe which I was able to get some photos of and I was lucky enough to see two Common Gallinules – a first for me. It was a beautiful morning with some excellent birding.

Monday afternoon I sat hidden in the bushes by the pond near my house in Goshen, NY for over two hours. I know, strange behavior. Well actually, I was watching and photographing two Green Herons that were spending their afternoon there. The herons spent their time grooming, hunting, and just sitting. It was fascinating to see how these  birds can take on a variety of shapes and sizes depending on their behavior. 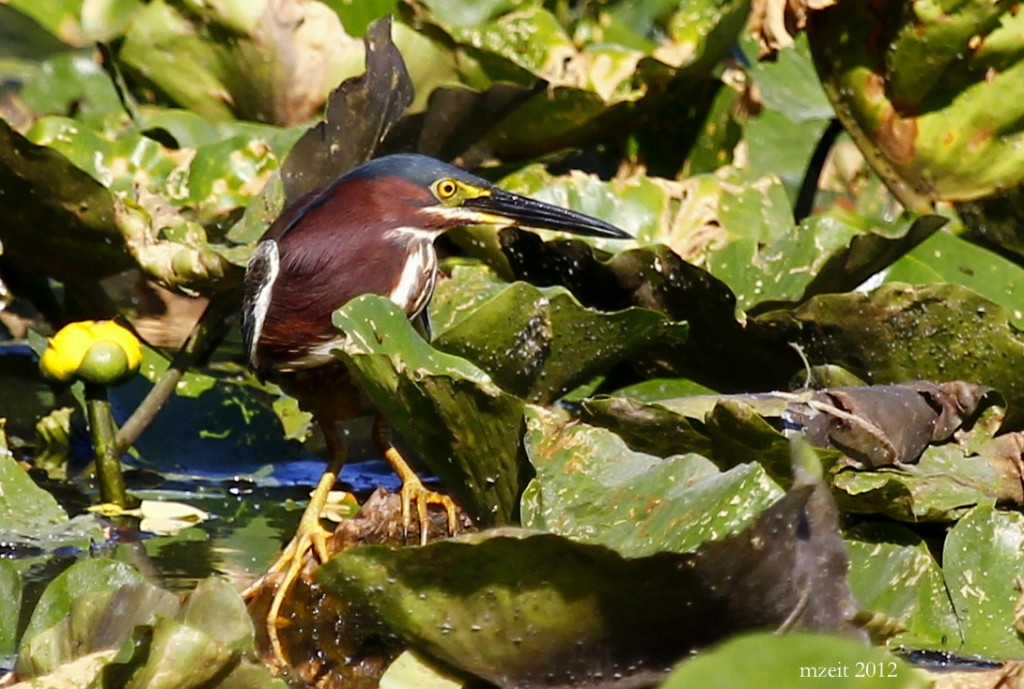 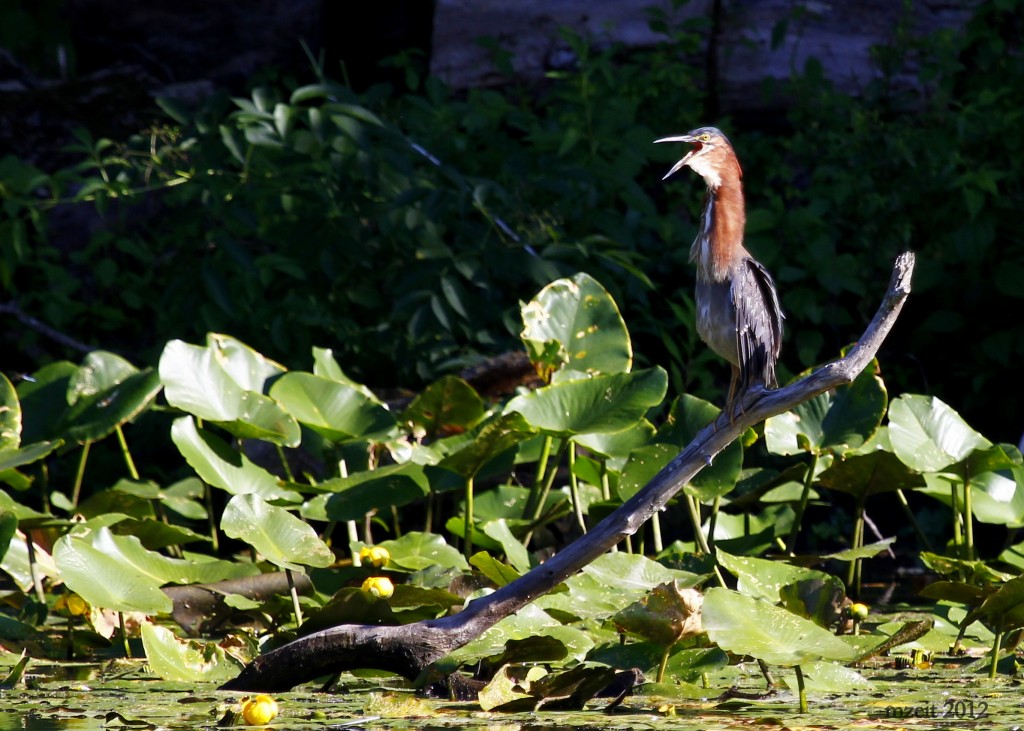 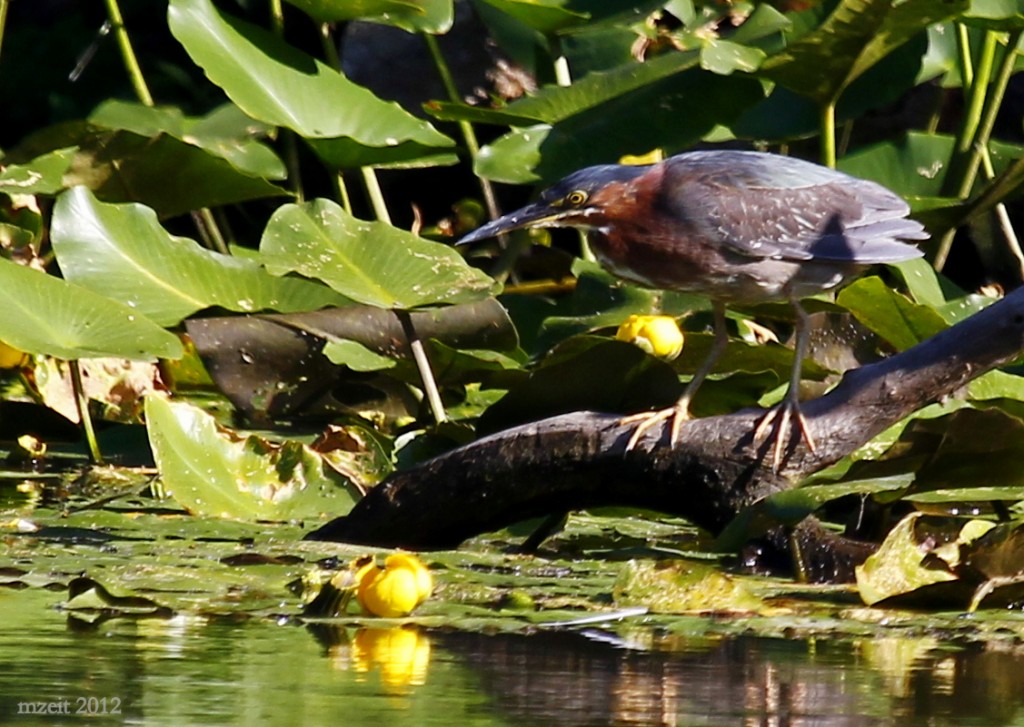 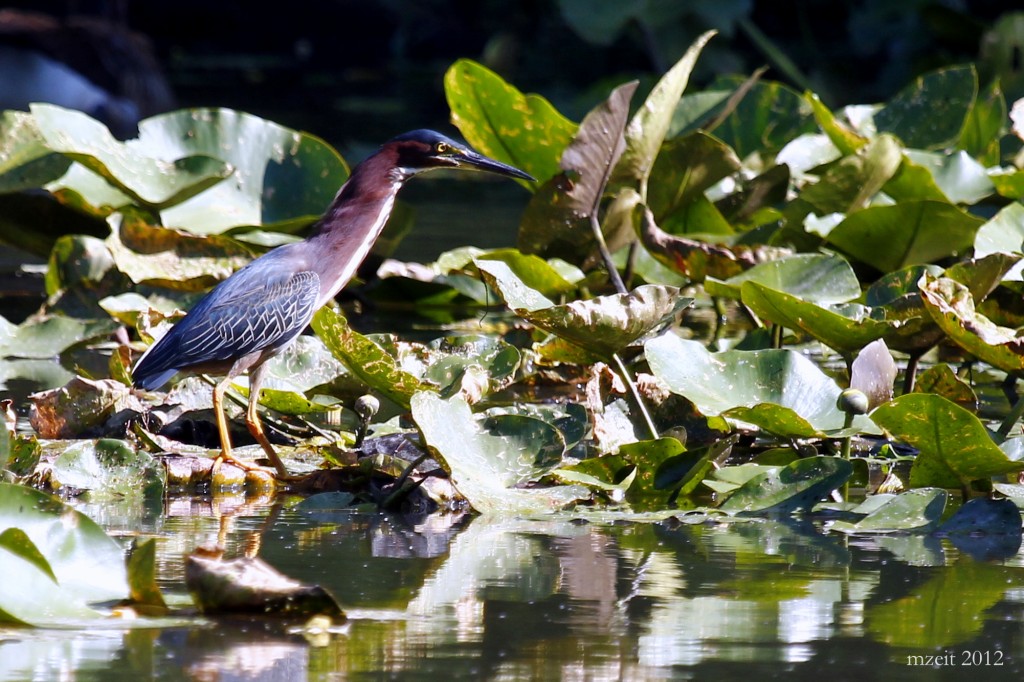 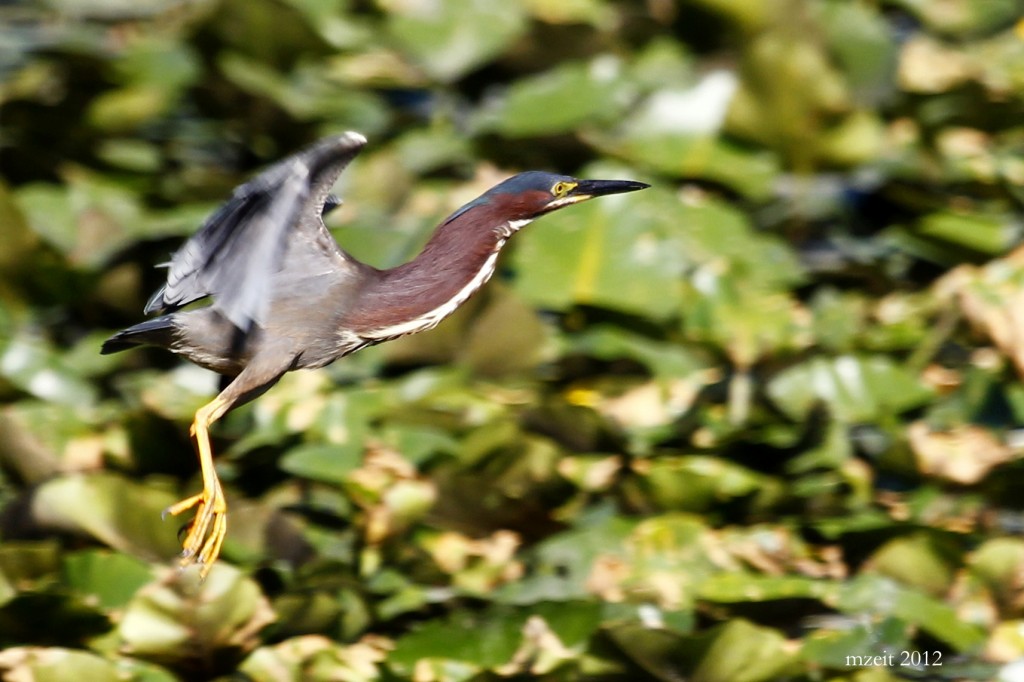 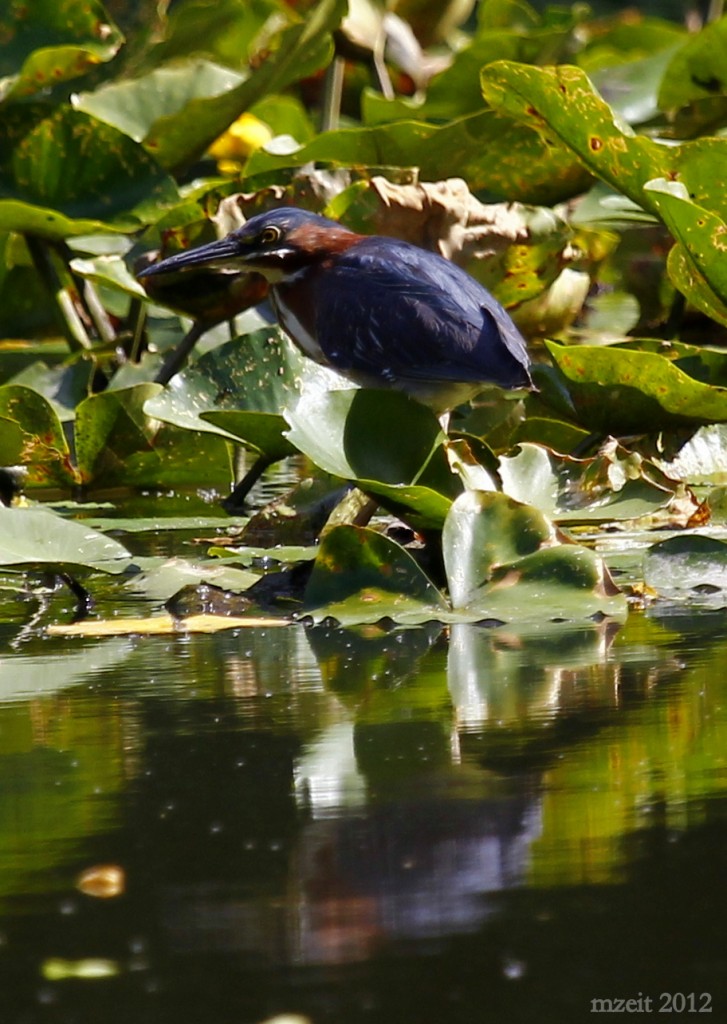 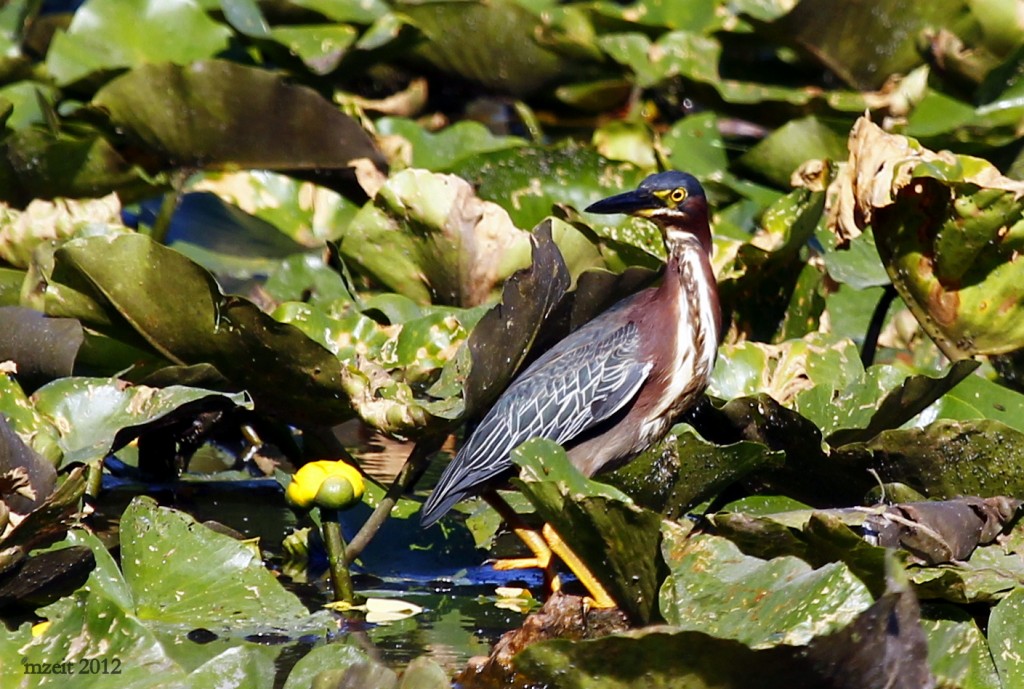 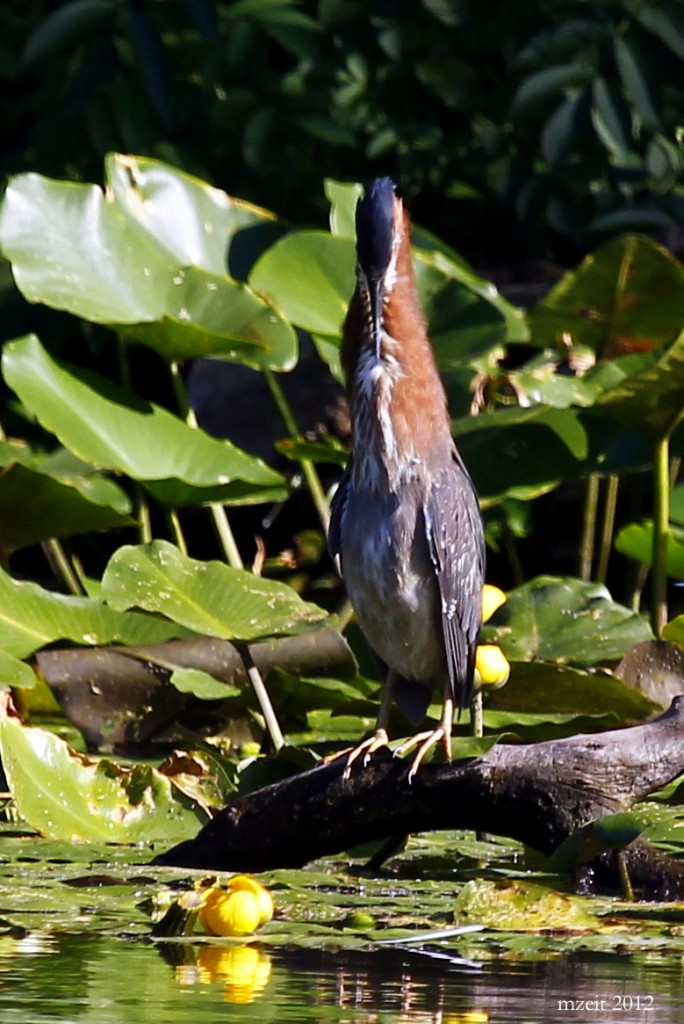 I read John Haas’ blog, The Bashakill Birder on a regular basis. Recently John has posted about the great birding he has been doing from his kayak. He has been seeing some of the birds that are little more interesting to me: American Bitterns, Least Bitterns, Common Gallinules and high numbers of Great Blue Herons and Wood Ducks. Inspired by this, I made it out to the Basha Kill early this morning to do some birding by kayak. It was a beautiful morning and it was very refreshing to be out in the marsh all alone. While I did not have success with some of the harder to find birds, I did get to see many Wood Ducks (almost at every turn!) and Great Blue Herons too. I was able to get out much closer to the Osprey’s nest where I watched the two adults going after a Great Blue Heron that decided to land in a tree a little too close to the nest. I also got some amazing looks at all three Bald Eagles. I was a little disappointed that I was unable to see (or even hear!) any Common Gallinules or Bitterns, but this is just something I will work towards. It was a great day of birding and I did alright with the camera. Here are some photos from the day: