This afternoon, upon my arrival home after a fun but busy Thanksgiving weekend up in Syracuse, I headed out to do some birding and enjoy the beautiful weather. I was undecided on where to go, but excited to get out locally. I tooled around the black dirt to see what I could find; it was a birdy ride, and I hit many of my usual spots and I eventually made my way out to the Camel Farm, where I ran into Karen Miller. We caught up, trading Thanksgiving stories and we sorted through the nearly 1200 Canada Geese that were present. A Red-tailed Hawk flew right over us, calling the whole time. We did not locate anything different among the Canada Geese, and I kept moving eventually making brief stops at the Wallkill River NWR’s Winding Waters Trail and Liberty Loop. I was happy to find over a dozen American Coots in front of the viewing platform at the Liberty Loop, in very nice light so I took some photos. For the afternoon I had a total of 29 species, I’ll include my list below.

Meanwhile, on Saturday morning, my brother-in-law Bill and I went out to one of my favorite birding spots – Montezuma National Wildlife Refuge. It was a terrible day for photos and tough for viewing distant birds as it was very gray and dark all day long. The refuge was loaded with waterfowl and we had 17 different types of water birds: Canada Geese, Tundra Swan, Gadwall, American Wigeon, American Black Duck, Mallard, Northern Shoveler, Northern Pintail, Green-winged Teal, Redhead, Ring-necked Duck, Bufflehead, Pied-billed Grebe, and American Coot! We did not get a large number of raptor species, but we had plenty of individuals, with several Northern Harriers and over a half a dozen of both Bald Eagles and Red-tailed Hawks. As I mentioned, it was a tough day for photos, but here are a few shots from the morning:

I’ve had a busy weekend, but I did get manage to get out and do some birding early Saturday morning. I met Maria Loukeris over at the Wallkill River National Wildlife Refuge, and we walked the Liberty Loop trail. It was a gorgeous morning, crisp with nice light and just a little bit of a breeze. We found plenty of birds to make the walk interesting, but I did not manage to see any of my target birds – Brown Creeper, Fox Sparrow, and Rusty Blackbird, all three of which I need for Orange County for this year. The highlight of the morning for me was seeing hundreds of waterfowl (Canada Geese, American Black Ducks, Mallards, Northern Pintails, and Green-winged Teals) pick up, circle around the refuge and then put back down again. We did alright with raptors with a Turkey Vulture, several Northern Harriers, an adult Bald Eagle, and 3 Red-tailed Hawks. My list for the day includes 26 species; nothing amazing, but it still made for a nice morning of birding that I was grateful to have.

Between the time change and just being very busy lately, today was the first time in a while that I’ve spent any amount of time birding in Orange County. I started out in the black dirt just after sunrise this morning, looking for the Horned Larks, Snow Buntings, and Lapland Longspurs. I found a flock of probably over 100 birds; they were mostly Horned Larks with over 20 Snow Buntings and I was happy to see a handful of American Pipits. I had no luck with longspurs. Two Northern Harriers, a male and a female were keeping the birds on their toes and moving around pretty good. I spent some time with the birds and eventually some landed close enough for some decent photos which made me happy. When falconer showed up and started to fly a Gyrfalcon in the next field, I figured it was a good time to move on.

I was also hoping for some waterfowl today. I went to Glenmere Lake and struck out. There were a good number of boats out on the lake, so I figured that was the reason. I also stopped by Wickham Lake two times, which a little more productive:

Between the two Wickham Lake stops, I spent a couple of hours at Mount Peter helping official counter for the day, Tom Millard. It was the final day of the hawkwatch season, and although it was slow day for migrating hawks, I did manage to get some decent photos. Just after I arrived, a Sharp-shinned Hawk appeared just over the trees and continued directly over the viewing platform. Not long after that, a Cooper’s Hawk shot in front of the platform and disappeared into the woods. I wasn’t quick enough on the draw to get photos of the Coop, but when a young Red-Shouldered Hawk took the same line a little while later I was able to get a few shots. I should mention that Saturday’s count was super (of course it was, I was supposed to count but had to work!). They had a total of 160 migrating raptors, including 130 Red-tailed Hawks and an immature GOLDEN EAGLE, the final bird of the day.

On my way home, I made one final stop at the Citgo Pond. I had a hunch there might be some interesting waterfowl present, but my hunch did not come to fruition, as I only found: Mallard (9), Northern Shoveler (4), and Green-winged Teal (18). It felt good to back in action here in Orange County!

Sadly, today was my final day of counting at Mount Peter for the season. Next Saturday was supposed to be my last day, but I unfortunately now have to go to work that day. I went out on a pretty good note – after a relatively slow week at Mt. Pete, I had good northwest winds and cooler temperatures, and a total of 61 migrating raptors for the day. Highlights included a Peregrine Falcon and two adult Bald Eagles. Red-tailed Hawks topped the numbers today with a total of 20 migrating birds and at least 4 locals. I had plenty of help up there today – thanks to Ajit Antony, Liza Antony, Carol Linguanti, and Rob Stone who all stopped by.

This was my third and certainly best season at Mount Peter. The Golden Eagle I had on October 17th was a personal highlight, and after my first week when I had only 17 birds, I had pretty good daily totals for the rest of the season. It was a great year for Mount Peter Hawkwatch too, with the highest ever season total of Broad-winged Hawks (11,256) and we are on track to have the second-highest season total of the watch’s 58 years in operation. 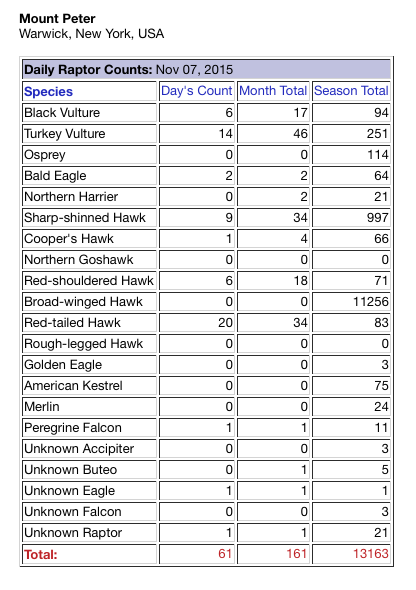