Okay, so at what point do I change the name of this blog to Bergen Birding? Over the weekend, another GREAT bird – a WILSON’S PHALAROPE, was located at DeKorte Park in Lyndhurst, New Jersey. I didn’t go for it then, I but today after work, I ran for the bird and luckily the bird not only stuck around, it was very accommodating for photos. I was talking with Chris Takacs while viewing the bird, and he indicated that this was likely a young bird. The bird is absolutely beautiful, white as white can be with a long very thin and pointy bill. It fed nearly the entire time I was there, only stopping to preen and then relax for a short time. This is the second time I’ve seen a Wilson’s Phalarope, my lifer was at the Liberty Loop back in April of 2013.

Huge thanks to both Maria Loukeris and Denise Farrel, who kept me posted with the alerts for this bird today.

Birding in Orange County has been a little bit slow all week, so Kyle, Linda, Maria, and I piled into my Volkswagen Golf and headed south to Richard W. DeKorte Park in Lyndhurst, New Jersey. We all seemed to be in the same mood, ready spend the morning at a spot that has no shortage of birds and also offers up great photo opportunities. We were not disappointed and had 41 species for the outing. LEAST BITTERNS were high on the priority list – we were hoping to get Kyle his lifer, which we achieved through a fly-by very early on. We saw several LEBI while were there, and we spent some quality time viewing and photographing one young bird that was in nice light and wasn’t too far away.

Other highlights included a nice look at a couple of male Ruddy Ducks in breeding plumage, and a young, large, (probably a female) Peregrine Falcon that absolutely ripped onto the scene and took what appeared to be a Forster’s Tern. Those PEFAs are killing machines and are fascinating to watch in action. For shorebirds, we had what I suspect are the expected species – Least Sandpipers, Semipalmated Sandpipers, Spotted Sandpipers, Short-billed Dowitchers, Greater Yellowlegs, and Lesser Yellowlegs. Other good birds included three Black-crowned Night-herons, a couple of Osprey, two Great Black-backed Gulls, and several Snowy Egrets. It was an excellent morning of birding in great company!

QUICK POST: I’m going to try to keep this short because it’s late and I’m tired. It’s remarkable to me how much luck plays a part in birding. After work today, thanks to some prodding from Maria Loukeris, I ran for the RUFF that has been reported in recent days out at DeKorte Park in Lyndhurst, New Jersey. I searched for the bird for over 2 1/2 hours from the Transco Trail, along with several other birders and then I decided to head home. On my way back to my car, I ran into Chris Takacs on the boardwalk; Chris had originally located the bird over a week ago. While we were talking, a group of yellowlegs flew over and Chris commented that it looked like the Ruff might have been in with them. Moments later, he received a text – he was right, the Ruff had just come in! We headed back out to the Transco Trail and sure enough the bird was still present! What an incredible bird, and I was so lucky to get it! I got great scope views and tried to take some photos and video – none came out very well, but I did get to document it. The Ruff is life bird #368 for me. Huge thanks to Maria for letting me know the bird had been relocated today, and also to Chris Takacs for all his help out there.

I got out of work a little bit late this afternoon, but I still had time to try for the BARNACLE GOOSE which had been reported in Ramsey, New Jersey on eBird. I tried for the bird yesterday without any luck, but today it worked out great. I got my lifer BAGO and it did not disappoint – what a super bird! I was able to get very good looks and my photos, while quite grainy due to the low light, still made me very happy. The Barnacle Goose has been sort of a nemesis bird for me. There have been a few Barnacle Geese that have been reported in the NY/NJ area in the past several years. There was one in Orange County back in 2012 that eluded me as did the one in the Bronx last year (which I only tried for one time). There was a Barnacle Goose reported at this same location last year and I tried for it several times but struck out each time. So, it was VERY satisfying to finally see this bird. If you are planning to go for this bird, please contact me and I will give you details.

Today’s early rain gave way to beautiful sunny skies in the evening, so I made my way out to Skinner Lane after work. The flock of Horned Larks continues at Skinner Lane with 2 Snow Buntings among them. Unfortunately the Snow Buntings never got close enough for photos, but I did get some Horned Larks that were not too far away. I hope these birds stick around because I would love to get some really close shots. 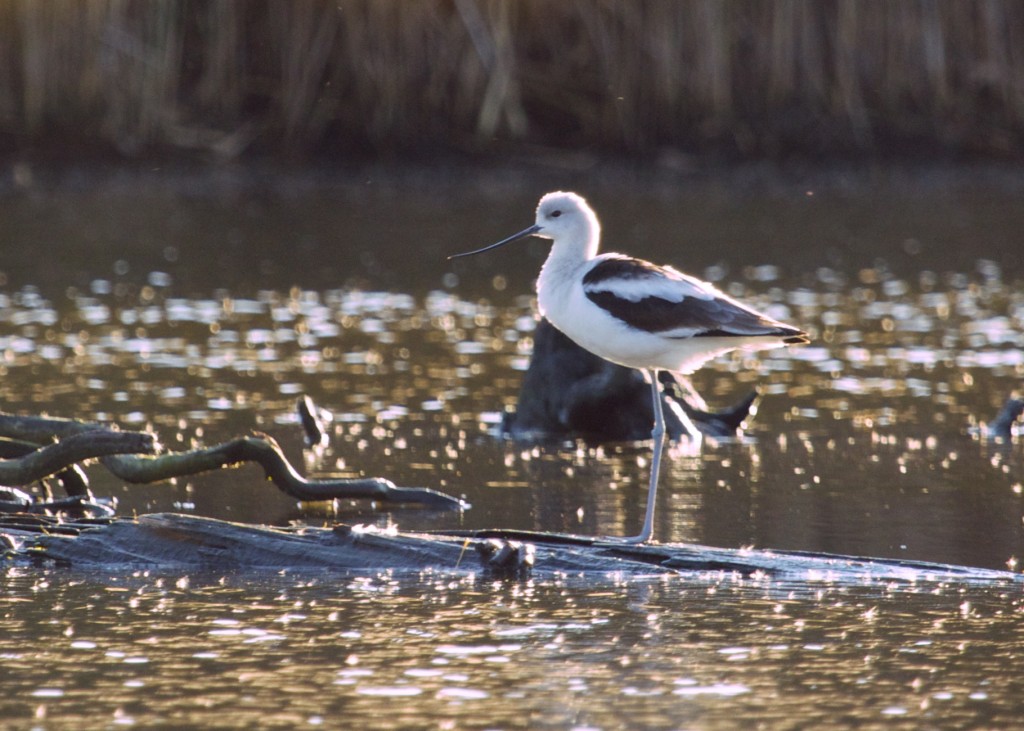 After work today, I drove over to the Clay Avenue Wetlands, located in Lyndhurst NJ. I had received a rare bird alert email from eBird, indicating that an American Avocet had been seen at the wetlands. The bird was easily located and what a beautiful bird it is! Unfortunately the bird was pretty heavily backlit and there are not many spots to view the birds from, which made taking photos difficult. I am not really thrilled with the above photo for various reasons, but I had to post this awesome bird. I hope to get back in the morning when the sun will be at my back. Stay tuned for more photos.

Here’s one more from today: 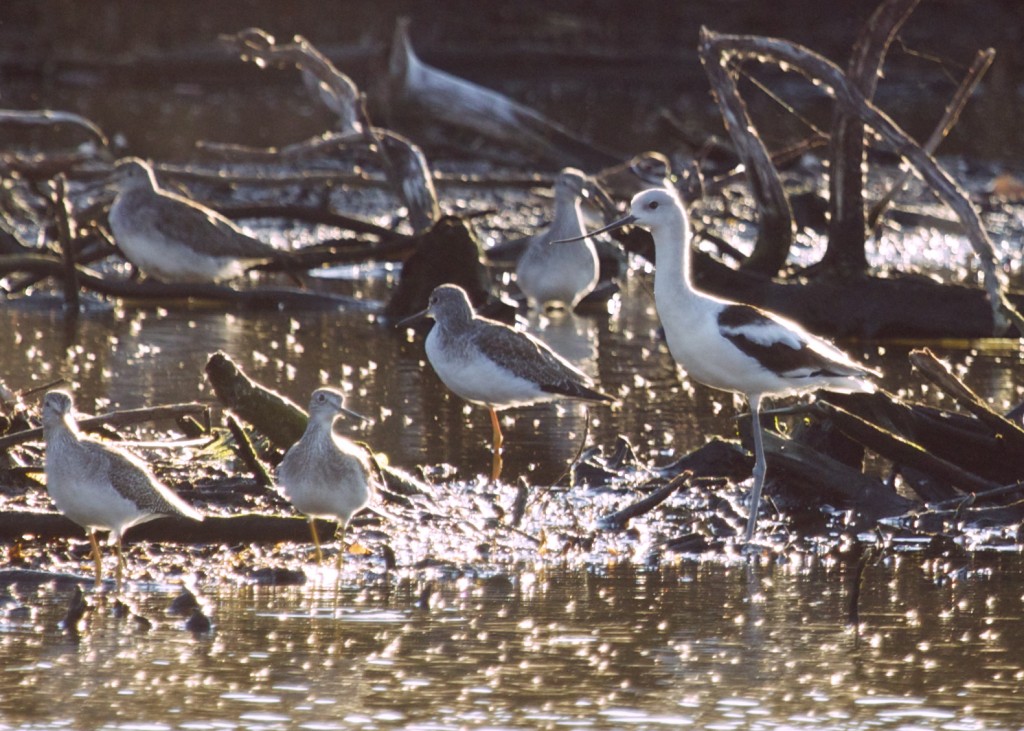 On Monday evening after work, I caught up with the Pink-footed Goose that has been seen recently at Overpeck Park in Bergen County NJ. I found the bird on a soccer field with about 60 Canada Geese.

After work today I went to Darlington Park in Bergen County NJ looking for a female Eurasian Wigeon that had been reported on eBird. Reports said that the bird was among 15 American Wigeon. I was happy to see that the birds were still present. It took me a little while to figure out which one was the Eurasian Wigeon, but once I did it was pretty obvious. I wonder if I had happened upon this group of birds without any prior knowledge if I would have picked out the Eurasian Wigeon among the American Wigeons? I’m not so sure I would have, or if I did I probably would not have had a clue what it was.  Here are some photos from the day –  I was disappointed because it was yet another very gray day that I was out birding in…

There was also a couple of Pied-billed Grebes present. One was larger and light colored while the other was darker and smaller – noticeably shorter at all times.  I really enjoy these birds, I had fun just watching them interact with one another.

I spent some time yesterday at the Franklin Lakes Nature Preserve in Bergen County, New Jersey (see link). The Tufted Titmice put on a show for me. Many thanks to Ken McDermott for helping me figure out who is who in these photos: